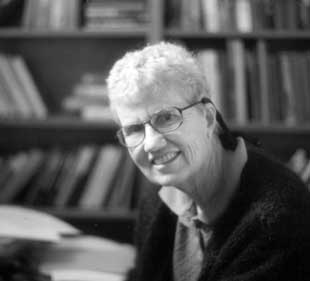 A Little Help From My Friends

34 Million Friends for the UNFPA is the culmination of a sleepless night that an outraged Jane Roberts spent in July 2002 after learning the Bush administration had cut all U.S. funding to the United Nations Population Fund (UNFPA).

Founded in 1969, UNFPA is the world’s largest international source of funding for population and reproductive health programs. Against the recommendations of experts and bipartisan Congressional support, President George W. Bush blocked funding based on allegations that UNFPA supports coercive family planning in China—accusations that have been proved groundless by multiple independent investigations, including one convened by Colin Powell.

As a long time reproductive health activist, Roberts, a 62-year-old retired French teacher from Rialto, California, had been watching the administration’s actions on this matter closely. “To me, it was the proof of whether Bush really was a compassionate conservative,” she says.

The extent of his compassion now evident, Roberts decided to address the cut in funding herself by calling on 34 million people to each give $1 to UNFPA. She began her campaign with that quintessential grassroots tool: a letter to the editor of the San Bernardino Sun. “As an exercise in outraged democracy,” she wrote, “would 34 million of my fellow Americans please join me by sending one dollar to the U.S. Committee for United Nations Population Fund? This would right a terrible wrong.”

Roberts’ actions caught the attention of the U.S. Committee for UNFPA, an organization formed in the late ’90s to promote awareness and support for the fund. The Committee put her in touch with Lois Abraham, a lawyer in New Mexico who had arrived at the same idea. Together, the two women established 34 Million Friends (www.34millionfriends.org) to replace the missing U.S. funding.

The lost funding represented 12 percent of the fund’s 2002 budget. The drain continues: In 2003, the administration again denied congressionally mandated funding to UNFPA, and observers fear that the $34 million appropriated by Congress for the 2004 fiscal year also will be cut.

So far, Roberts’ group has raised $1.9 million, which will help pay for initiatives related not only to birth control, but maternal health, childbirth and women’s equality. In 1999, UNFPA added reduction of HIV/AIDS infection rates to its goals and reaffirmed a focus on affordable, accessible reproductive healthcare.

Roberts sums up the fund’s importance this way: “When the world takes care of women, women take care of the world. Women are the stabilizing influence in communities, in societies and countries.”

For Roberts, it is the gathering of individual donors that gives 34 Million Friends its power. She says she would rather have 1,000 $1 contributions than one $1,000—not that larger donations aren’t nice.

“We want anybody to be able to contribute, and feel good about it,” she says. One donor, a grandfather, sends in $5 a month in honor of his five granddaughters. Another, a teenage mother, read about the fund in Glamour, and sent in a donation with hopes for a better future for her daughter. Such stories convince Roberts that her fund is empowering the donors by giving them a voice and a stake in world affairs.

Roberts has certainly been affected by her involvement with the campaign. She and Lois Abraham now are good friends, and she speaks laughingly of her nonstop travel schedule and increased computer literacy. “At most, all I ever did before 34 Million Friends was e-mail my daughter. Well, I have learned to write documents, e-mail them, attach them. I’ve learned how to Google things!”

In early May, Roberts traveled to Brussels to launch Friends in the European Union. For her, the campaign has become more than just a means of replacing funds. By expanding the project, she hopes to build a “worldwide constituency of people who, by small gifts, every year announce to the world that this should be a—if not the—world’s top priority. They’d also be saying to their own governments, ‘We want you to support this.’”

“In the long term,” she says, “just giving women the chance to make choices about their own lives will help the cause of peace and stability.”