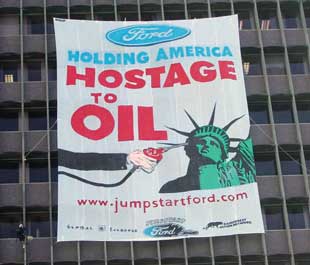 In January, my sister was arrested for hanging a banner off Los Angeles’ Transamerica building depicting a gas nozzle gun held to Lady Liberty’s head with the slogan “Ford: Holding America Hostage To Oil.” My sister’s direct action might seem extreme, but as Matthew Yeoman’s Oil: Anatomy of an Industry makes clear, such stark confrontations with how oil affects our lives are long overdue. America is the world’s largest oil consumer and Oil amply demonstrates that our dependence on this nonrenewable resource is a threat to economic, geopolitical and environmental security.

Yeomans’ slim volume is a volatile mix of history, politics, economics, science, and foreign and military policy. It is a story of strength: How the world’s sole superpower generates, uses and controls power. Yeomans begins with a good old-fashioned object lesson, trying to live a day without oil. But he soon realizes that he cannot leave his house—the city’s streets and his shoes are made from petroleum products; and even if he could leave, he wouldn’t be able to see—both his glasses and contact lenses are petroleum-based.

The lesson learned, Yeomans uses the rest of Oil to trace the environmental, economic and security consequences of oil addiction. He notes that the United States uses one-fourth of the world’s oil, producing 8 million barrels a day and importing another 12 million. Meanwhile, our domestic production capacity is waning; U.S. oil fields are 25 percent less productive than 20 years ago. Even so, the United States has more cars than drivers, and new vehicles rolling off the assembly line are less fuel-efficient than past models.

The “Energy Wars” chapter is timely and telling. Since Winston Churchill’s oil-powered battleships turned the tide of WWI, the fate of great powers has rested on their ability to control access to oil. The paradigm is: oil access = a strong military = security = oil access. Yeomans covers familiar ground in describing this dynamic in the post-9/11 context: the pipeline politicking in Afghanistan and the Caspian; Saddam Hussein as a former client of the United States; Iraq as the Holy Grail of oil riches; Cheney’s ride in the revolving door between the defense industry and the White House; the neocons’ role in crafting policy, and Africa as the new oil boom town. But he covers it well. Morsels of insight and analysis, like his analysis of the war against Iraq as an effort to undermine OPEC, make the book more than just a simple overview.

Iraq, in the words of Paul Wolfowitz, “floats on a sea of oil”—112 billion barrels at least. But how much oil does it takes to ensure U.S. control of that motherlode? The U.S. military used an estimated 45 million barrels in the 1991 invasion of Iraq. No figures for the 2003 war have yet to be formulated, but the Rocky Mountain Institute estimates that in the first 3 months the air war alone consumed 1.5 million barrels of jet fuel.

This is a drop in Iraq’s bucket, but the fact that the Defense Department is the United States’ single largest consumer of energy should create opportunities to break Churchill’s paradigm. The U.S. military expends most of its fuel moving fuel. For example, 70 percent of the tonnage transported in Army deployments is fuel for military hardware like the Abrams tank, the workhorse of the occupation, which gets about .2 miles to the gallon.

To challenge our oil dependence, we will have to do more than choose Hybrid over Hummer. We have to dismantle this deadly paradox—that the U.S. military is the largest consumer of oil as it tries to secure U.S. access to oil—and begin to develop a new paradigm that asserts national security’s independence from oil, and that global security involves the development of renewable energy for the good of the environment and the economy.

If our country remains the occupying force in Iraq and continues its current course of the global War on Terrorism, we will remain an oil-dependent nation caught in a cycle of “wars of blood for oil” that waste both, and ultimately gain nothing.