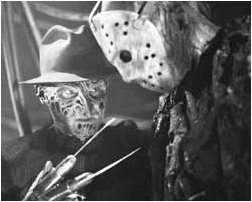 The hat and the hockey mask: principles in eternal opposition.

The Naked and the Dead

BY James Parker
Share TweetReddit0 EmailPrint
Deep in the Babylonian Talmud, heard amid its ancient rustlings and disputings and brain-whorls and coiled insanities, is talk of a very special—perhaps the most special—“wild-beast contest”: an elite show to be laid on by the Creator in the Time to Come. For the exclusive diversion of the righteous, who will all be encouraged to take their seats at ringside, Leviathan—dreadest of the dread—will take on Behemoth. What a showdown! Watery chaos hurled screaming against imponderable mass, the teeth of dissolution fastening on density itself; the shit will truly hit the fan. Afterwards, it is written, the righteous will be permitted to primly snack on the (kosher) flesh of the mutually-destroyed mega-beasts, like guests at a gallery opening.

No such food for us. Here on the mortal crust, in the fallen present, we who would see monsters join battle must be content with Freddy vs. Jason, directed not by God but by Ronny Yu (The Bride with White Hair) from a screenplay by Damian Shannon and Mark Swift. Ronny, Damian, Mark? LOVE YOUR WORK, fellas.

Jason Voorhees, it will be remembered, is the hockey-masked psycho-drudge from the Friday the 13th movies, always on the job with his old machete; Freddy Krueger is the half-melted childcatcher from Nightmare on Elm Street, with the flame-seamed face, the felt hat and the hand with blades for fingers. Both are unkillable—Jason because he is insensate and implacable, Freddy because he has a wraith-like existence in the nightmares of teenagers, from which realm he reaches out with bladed hand to do actual material damage.

Vaulting nimbly over the question of why or how, exactly, these two demons would be conjoined in rampage (something to do with Freddy summoning Jason, needing FEAR for his own re-emergence), Ronny Yu and his writers leap directly into the thick of it. Scene One: Some kids are partying at a house on Elm Street, exhibiting those special signs of carnality and incuriousness that are the mark of the imminently slaughtered. A long-limbed and baseball-hatted slattern is smoking and drinking and using the f-word. Oh Jason, this is not to be borne. With a lavish reckless movement she flicks her cig-butt into the night air; it bounces sparkily off Jason’s mask (he is waiting in the bushes). Within minutes she is having sex—could any call to action be stronger? Nothing makes the almost-dead ember of Jason’s brain glow, nothing heats it like the sight (viewed through mask-holes) of a couple of teenagers having sex. Up goes the machete! Down it comes!

Elm Street is a slaughterhouse again, and FEAR, Freddy’s elixir, is kindled. His name is whispered in terror, and his shrivelled spirit puts on strength. The plan is working! But no it isn’t: Jason, slo-mo berserker that he is, cannot be stopped. The bodycount grows too high; he will annihilate all of Elm Street. Freddy must trim his enthusiasm. Let the games begin.

For Freddy and Jason, this film is a first date. Each has recurred through many sequels (an astounding nine, in Jason’s case), but never faced the other before. In our last sighting of Jason (at the conclusion of 2002’s Jason X) he was being propelled Alien-style into raw space, blasted into the void from some rocket-tube or other, there to wheel about with all the other space-garbage. (Was he on fire? Perhaps. In which case, space quenched him.) Freddy has not been seen since 1994’s Wes Craven’s New Nightmare, a twisted piece of cerebration in which screenwriter Craven appears stiffly as himself, complaining of nightmares.

Now the two are brought together in a storm of mythic logic. For this is no mere rubbing-together of franchises, as of avaricious hands in prospect of cash; no sir! Freddy—magic-man, hat-wearer, one-line artist, nimble hallucination, sanity’s accuser—had to face Jason at some point. Jason, who never speaks. Or moves quickly. Who is appallingly corporeal, a trudging monument of carnage. Who is, above all, styleless, a shaggy lump, being nothing but the blank face of unopposable doom. If Jason were to be matched against, for example, Michael Myers, slasher-hero of the Halloween series, now that would be a rip-off, a bum fight, two blind sluggers sawing away at each other. But Jason vs. Freddy—sooner or later these two horror-principles had to explode against one another.

The interesting thing about Freddy vs. Jason is the sympathy that springs up in us, quite naturally and almost unbidden-for, for Jason. Excitable plebeians in the crowd begin to hoorah for him; as he lies on his back being perforated over and over by Freddy’s claw-hand, which smokes like Macbeth’s sword “with bloody execution,” they cry out to him: “Jason, get up! You’re fine, dude!” He is, after all, a mere will, with none of Freddy’s glittering malice. He is pitiable; innocent, even. The battered chest rises and falls, the head turns this way and that in brutal confusion. Before water (his Kryptonite) he pauses and starts to quake—a sort of mute, earth-deep terror-sob. The Talmudists would have understood.