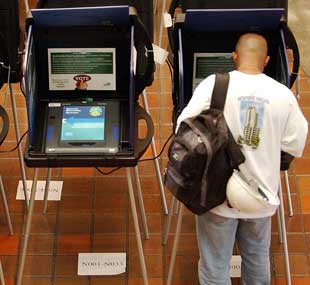 In a democracy, an inauguration should be a day of celebration, not only for the victors, but also for the process—an orderly and peaceful conferring of power based on free and fair elections. The process allows the losers to accept the outcome, knowing that, although disappointed, they can rest assured that they had their chance, and that will soon have another. The process allows the victors to govern legitimately.

But today’s inauguration offers cause for neither consolation nor celebration. The defeated have little reason to accept the outcome as legitimate. Votes were denied and votes were lost. We lack assurance even those ballots that were counted, were counted as cast.

Those who supported the president may well find their victory hollow. Doubts about the integrity of the election undermine efforts to govern a democracy. A degradation of democratic processes presents a worse danger—the creation of a political class of unremovable incumbents, and the dreadful possibility of dictatorship. Over the course of history, democracies have fallen and that is how the end begins.

An investigation limited to Ohio by members of the House Judiciary Committee has substantiated:

Beyond these conventional transgressions, which also have been widely documented in other states across the country, the United States has introduced in recent elections a system of potentially undetectable mass-vote manipulation: electronic voting machines that produce no confirmation that votes are recorded as cast. Stanford University computer scientist David Dill draws the analogy of telling a man behind a curtain whom you want to vote for and trusting that he has recorded it faithfully. Voters using electronic voting machines likewise blindly trust that the programmer has written code that can and will record their votes as cast.

That we should ever have to trust such a system is absurd. Moreover the men behind the curtain of our voting machines included executives highly involved in the President’s reelection campaign and a senior programmer convicted of 23 counts of felony theft involving software systems.

Americans are largely unaware or resistant to any suggestions of problems with the vote. Political pundits are silent. And the national press corps, with few exceptions, refuses to question conventional wisdom.

We are not only a democracy, but the democracy. Free and fair voting is embedded in all our cultural values and institutions.

America, alas, is susceptible to the same forces and pressures that have caused other democracies to fall. An inauguration should be a time of hope and new beginnings. Unfortunately, aside from any considerations of policy, this inauguration augers dread and raises the question of whether this is the beginning of the end of democracy.

Steven F. Freeman is on the faculty of the Center for Organizational Dynamics at the University of Pennsylvania where he teaches research methodology. Freeman’s research on the 2004 election will be published in a book—co-written with In These Times Editor Joel Bleifuss—by Seven Stories Press this spring. Read more of his 2004 election research.