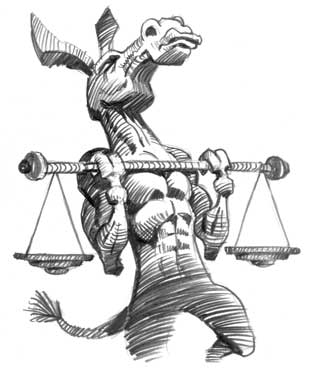 Democrats must make a campaign issue of Bush’s full-court attack on basic values, such as liberty and equal protection.

The most dangerous obscenity spewing from the seat of government of late is not the vulgar outburst of Dick Cheney, displacing onto Pat Leahy his pique at a national electorate numbering his days as veep. Instead it takes the form of an interoffice memorandum. Leaked nearly two years after its delivery to White House counsel Al Gonzalez, Jay Bybee’s August 2002 blueprint on how to beat a torture rap under international law is the one permission slip Bush sought from the rest of the world. Seldom has a white paper written on the public’s dime given carte blanche to such cruelty.

Yet unlike Cheney, Bybee cannot be rousted from the public payroll. Even after flouting conscience and case law to excuse abuse of detainees based on “complete discretion” of “executive power,” he has political immunity. Why? In March 2003, long before his torture memo saw the light of cyberspace, Bush succeeded in appointing Bybee to the federal bench, one promotion away from the Supreme Court.

How Bybee gained this seat on the Ninth Circuit Court of Appeals says as much about this administration’s degraded standard of jurisprudence as it does about its dogged funneling of far-right ideologues into lifetime slots on the bench.

Don’t let Michael Moore’s depiction in Fahrenheit 9/11 fool you: Getting Caspian crude across Afghanistan isn’t the only pipeline Bush has pushed. In less than four years, the White House has fine-tuned a system to ram through a slew of judges deferential to corporations and who hold a dim view of privacy rights and nondiscrimination, particularly as they pertain to gay people.

To do this, Bush and Co. exploited a far-reaching and well-oiled machine of law-school alums and chums manufactured by the Federalist Society. The National Center for Responsive Philanthropy recently reported how much the wealthiest right-wing foundations lavished on the club ($4 million in the waning days of the Clinton era alone). More than previous Republican regimes, Bush has counted on this network for judicial candidates like Bybee, and then on the airwaves of Big Intolerance Inc. (radio and TV moguls like James Dobson and Pat Robertson) to tout his chosen nominees. It’s working, with Prussian efficiency.

This black-robed vanguard and its claque have stoked a bonfire beneath each rights-based interpretation of the Constitution since the Warren court’s obit of Jim Crow in 1954. Given the records and relative youth of several Bush appointees, plentiful and explosive opinions from these judges are poised to detonate like land mines far into the future.

The most recent cause for alarm is James Leon Holmes. Holmes’ views smack of Christian Reconstructionism, a strand of austere theology that advocates replacement of secular law with strict readings of scripture. “The final reunion of church and state will take place at the end of time,” Holmes told a gathering two years ago. “Christ will claim a definitive political power of all creation, inaugurating an entirely new society based on the supernatural.” From a federal judge?

“This is one of the most divisive nominations put forth by the Bush administration, and that is saying a lot,” said Barry Lynn of Americans United for Separation of Church and State.

“Holmes’ proper place is nowhere near the authority of the federal bench,” said Gloria Feldt, president of Planned Parenthood. “His infamous comment that rape exceptions to abortion bans are unnecessary because conception from rape happens ‘as often as snow falls in Miami’ demonstrates both his blatant disregard for the facts and his appalling lack of compassion for the 300,000 American women who are raped each year and the 25,000 of those women who end up pregnant as a result.”

Given the green light to extremism created by one-party rule along Pennsylvania Avenue, it’s no wonder the delusional reactionary Sun Myung Moon received such a warm welcome on Capitol Hill earlier this year. Yet Moon’s emergence is a sideshow next to Bush’s exploitation of religion to foment the judicial juggernaut and feed his own reelection.

This Bush strategy has been a boon to the GOP’s corporate contributors, who exported jobs and lined their pockets while his evangelical base was distracted by a steady stream of anti-gay propaganda.

GOP leaders pressed for a July Senate vote on a constitutional amendment banning gay marriage. And the Bush-Cheney campaign has sought to extend the sugar-high of hate in swing states using petition drives to trigger votes this fall on similar bans in state constitutions. As of mid-July, eight such proposals were headed before voters, with one, in Missouri, to be decided on the August 3 primary ballot.

By making all this possible, GOP fundraisers really live up to the “pioneer” label the campaign has proudly pinned on them: They are carrying the country into an uncharted no-man’s land of lower wages, diminished opportunity, snipped-away safety nets, and little recourse through the courts for anyone at risk. And now they have one more foot soldier doing their bidding from the bench. On a largely party-line vote July 6, Republicans won Holmes’ confirmation by the Senate, 51 to 46.

Democrats must make a campaign issue of Bush’s full-court attack on basic values, such as liberty and equal protection. They must do two things.

First, progressives must take the Kerry campaign slogan to heart and realize that restoring balance to the federal judiciary is at the core of “letting America be America again.” It means discarding the paralyzing presumption that court appointments are so much esoterica, or “inside baseball,” as one dismissive Washingtonian said.

It means turning nominations like the privacy-phobic Holmes and the gay-baiting Claude Allen into millstones on the necks of faux-conservative politicians like the radical Bush. Having taken a far-right detour from their libertarian rhetoric, these Ashcroft-like acolytes want a government so small it can fit in your bedroom.

And the judiciary’s traction as a campaign issue is not limited to sexuality politics. As the case of wrongfully detained terrorist suspect Brandon Mayfield of Portland, Oregon, illustrates, many Americans stand to lose when the U.S. government gets all gimlet-eyed toward its citizens. The FBI subjected Mayfield, an attorney, to an investigation so probing it would make a proctologist wince. Suspecting him of involvement in the March subway bombings in Madrid, they took loads of evidence from Mayfield’s office and home. Among the latter were “miscellaneous Spanish documents,” which as the New York Times noted with restraint, “turned out to be Spanish homework belonging to Mr. Mayfield’s children.”

For progressives, bringing the issue of the bench home to voters also means articulating the stakes involved in concrete ways that play in Peoria. Such was the impact of the simple question framed by NARAL-ProChoiceAmerica in the early ’90s, “Who Decides?” That message has proved its staying power, echoing down the Mall in Washington again this April when a million abortion-rights backers came to put the issue of Supreme Court appointments front and center in the election-year debate.

Second, progressives must build an infrastructure to promote qualified liberal candidates for the bench. This network has strong existing foundations to build on, from the American Constitution Society to the wise and determined advocacy clearinghouse Alliance For Justice. The lesson for progressives in the rehashing of Reagan’s legacy is that at the dawn of the GOP’s 12-year reign, Reagan’s team created a delivery system for moving right-wing ideologues from classrooms, faculty offices, think tanks, and the temples of commerce onto the bench and then up the judicial food chain. For every extremist like Robert Bork who got bounced, several others made it through without meaningful public scrutiny or Senate criticism.

Beyond electing Kerry-Edwards, progressives must help to restore a Democratic majority in the Senate. The party can pick up two or more seats this year, which would limit foot-dragging over Kerry nominees. In tactical terms, retaking the Senate could prevent derailing of liberal and moderate appointees by denying GOPers the bully pulpits possessed by committee chairs. And it could deaden demands, like those of the last six years of the Clinton administration, that Democratic aspirants be paired or packaged with reactionary counterparts in order to proceed,

Since the Republican takover in 1994, Democrats have made feasts of such half-loaves. But with the political landscape shifting in our favor this year, we need to raise our standards and seize the day when it dawns for us next year.