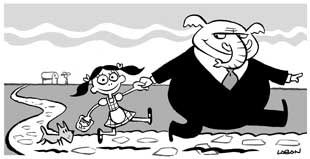 Politically speaking, Kansas conjures images of Bob Dole’s crusty but muted Main Street conservatism. But for many decades after anti-slavery militants settled there in the mid-19th Century, Kansas was associated with varieties of ideological radicalism—mainly left-wing populism and socialism, but also prohibitionism and religious zealotry. Yet during the 1990s, as native son Thomas Frank recounts in his lively new book, What’s the Matter with Kansas? How Conservatives Won the Heart of America, Kansas became a hotbed of radical right-wing Republicanism and a quintessential “red state” in the closely divided 2000 presidential election.

The right won in Kansas, Frank argues, by waging class war, but with class completely stripped of any foundation in economic inequality or power and defined in purely cultural terms. As played out in Kansas—and even more so among the national right-wing commentariat—this is a war of “real Americans” against a snooty, immoral liberal elite that controls an overbearing government and generates a popular culture that victimizes the God-fearing, super-patriotic, gun-toting, evolution-doubting and strongly anti-feminist, anti-gay “majority.” The cultural class warriors have an economic program—radically cutting taxes, business regulation and government, including farm programs and public schools—but the most committed foot soldiers march to a religious and cultural drumbeat.

It was in many ways a remarkable class war. It was fought mainly within the state’s long-dominant Republican Party. The insurgent radical right (“the Cons,” in Frank’s terms) attacked the moderate party establishment (“the Mods”) as a liberal elite at odds with the masses. But it was not just an ideological split in the party. It was a class divide. The Cons, Frank argues, drew support from the working class; the Mods were primarily more affluent corporate types. On economic issues both factions were conservative, but the Cons mobilized their followers with angry rhetorical riffs reminiscent of Populist class appeals—even though Con leaders often were business elite opportunists.

And the corporate elite mainly benefited from the policies the Cons implemented. The insurgent workers lost economically from the Con political victories, which intensified the effects of market forces that already had brought ruin to many ordinary Kansans in impoverished rural regions, Wal-Martized small towns and de-unionized meatpacking plants.

“For decades Americans have experienced a populist uprising that only benefits the people it is supposed to be targeting,” Frank writes. “In Kansas we merely see an extreme version of this mysterious situation. The angry workers, mighty in their numbers, are marching irresistibly against the arrogant. They are shaking their fists at the sons of privilege. They are laughing at the dainty affectations of the Leawood toffs. They are massing at the gates of Mission Hills [the wealthy suburb where Frank grew up], hoisting the black flag, and while the millionaires tremble in their mansions, they are bellowing out their terrifying demands, ‘We are here,’ they scream, ‘to cut your taxes.’ ”

Frank, the founding editor of The Baffler, a delightfully quirky occasional journal, and author of One Market Under God and The Conquest of Cool, is a wry and artfully entertaining writer with a keen perception of the ironies of popular culture. Through a meditation on Kansas—part history, autobiography, reporting and textual criticism of right-wing pundits—What’s the Matter with Kansas? tackles one of the central mysteries of American politics: Why do the targets of corporate America’s class war not rebel, or—as Frank suggests—rebel in ways that worsens their own economic well-being?

Frank argues that they have been conned by the Great Backlash, a reaction against the cultural and political upheaval of the 1960s that keeps the cultural pot stirred with a multitude of disparate, often petty complaints—what he dubs the “plen-T-plaint”—about liberals taking the country to hell in a handbasket. Much of what the Backlash dislikes, especially in the culture, is not particularly liberal or left but a product of corporate America profiting from appropriating hipness, Frank argues, just as much of the upheaval in people’s lives arises from market forces, not decisions of pointy-headed professors.

The Great Backlash is historically more fluid than suggested by the view from Kansas, where it erupted later than much of the nation’s reaction against the movements of the 1960s and apparently was less motivated by racial animus. It continues a longer history of political reaction, including anti-Communism. In past decades, workers also were recruits to earlier forms of political reaction, including McCarthyism and fascism, and old rants against “communism” are now replayed against “liberalism,” with inverted class war twists. Frank notes in sharp detail the contradictions between the cultural reactionaries and free-market ideology, but he falls short in explaining how those odd-bedfellow ideologies came to cohabit.

Frank’s central, provocative argument that the “Cons” represent the working class in Kansas would have been more persuasive with more detailed analysis of voting patterns, opinion surveys or in-depth interviews. He profiles grassroots right-wing leaders like Tim Golba, who works on the line in a Pepsi plant, but it would have been good to learn more about Kansans who vote for right-wing Republicans but aren’t committed ideologues. The political balance can shift as these voters weigh alternatives, even in Kansas, where the governor and one of four Congressmen are recently-elected conservative Democrats.

It’s easy to misread Frank’s account to suggest that the Great Backlash is a movement of the vast majority of workers, who have collectively gone off the deep right end. But I suspect many of the Backlashers are small businessmen, sales people, farmers and other lower-middle-class types, and that many disaffected workers have just stopped voting altogether. Also, there are other causes of confusion about class besides the Backlash, including the long-term trend for people to see themselves as consumers rather than workers or citizens, and the “national security” issues created by the warped vision of America’s imperial foreign policy.

In Frank’s account the Backlash took hold in Kansas following a large-scale, militant Operation Rescue anti-abortion protest staged in Wichita in 1991, spurring the creation of a well-organized right-wing movement to take over the Republican Party. But even more, he blames the abandonment of the working class by Democrats as they sought corporate money and “middle-class” votes. In national polls and voting patterns, working-class voters still lean Democratic and express relatively progressive views, but unions—which reorient workers from cultural to economic issues—are shrinking, and the Democrats are not creating a progressive answer to working-class discontent. Many Kansans—and their brethren elsewhere—are not acting like the rational economic agents of free-market theory, partly because they are offered no rational strategy for people in their class shoes. Frank’s journey to the heart of Kansas is a savvy and engaging effort to put social class back where it deserves to be, in the center of politics in Kansas and the nation.