Greenwald vs. Pollitt on Ron Paul 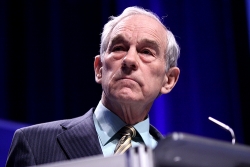 Katha Pollitt of The Nation is getting tired of the tongue baths Ron Paul has been receiving from her fellow progressives lately. And they are mostly fellows, perhaps because one of Paul's most glaring defects is his desire to criminalize abortion. Pollitt praises some of Paul's positions, but she has no illusions about whether progressives should find his ideology attractive as a whole:

Ron Paul has an advantage over most of his fellow Republicans in having an actual worldview, instead of merely a set of interests—he opposes almost every power the federal government has and almost everything it does. Given Washington’s enormous reach, it stands to reason that progressives would find targets to like in Paul’s wholesale assault. I, too, would love to see the end of the “war on drugs” and our other wars. I, too, am shocked by the curtailment of civil liberties in pursuit of the “war on terror,” most recently the provision in the NDAA permitting the indefinite detention, without charge, of US citizens suspected of involvement in terrorism. But these are a handful of cherries on a blighted tree. In a Ron Paul America, there would be no environmental protection, no Social Security, no Medicaid or Medicare, no help for the poor, no public education, no civil rights laws, no anti-discrimination law, no Americans With Disabilities Act, no laws ensuring the safety of food or drugs or consumer products, no workers’ rights. How far does Paul take his war against Washington? He wants to abolish the Federal Aviation Authority and its pesky air traffic controllers. He has one magic answer to every problem—including how to land an airplane safely: let the market handle it.

That paragraph neatly sums up the good and the bad of Ron Paul's candidacy. He's a crank with a few great ideas.

Progressives can draw distinctions as finely as they like when discussing Paul because he's never going to win the GOP nomination. Most of us will never have to go into a voting booth and make the decision to pull the lever for Paul vs. anyone else.

When 3quarksdaily linked to Pollitt's column, a handful of 3qd commenters condescendingly pointed to Glenn Greenwald's post about progressive "fallacies" on Paul as a corrective to Pollitt.

"That Greenwald piece is like a shock of cold water, isn't it?" wrote commenter uncontrarian, "I have long admired Katha Pollitt, perhaps more for her style than her political views, but clearly Greenwald has presented the more nuanced and mature (not to mention progressive) view of the Paul candidacy in reference to Obama's politically ambivalent presidency."

If you liked Greenwald's column, you should also respect Pollitt's. If you think that Greenwald's arguments apply to Pollitt, you've misunderstood one or both columns. Greenwald's column came out first, so we know he's not addressing Pollitt directly, but I'm juxtaposing the two because the 3qd commenters later cited it as a good rebuttal.

The thing I loathe most about election season is reflected in the central fallacy that drives progressive discussion the minute “Ron Paul” is mentioned. As soon as his candidacy is discussed, progressives will reflexively point to a slew of positions he holds that are anathema to liberalism and odious in their own right and then say: how can you support someone who holds this awful, destructive position? The premise here — the game that’s being played — is that if you can identify some heinous views that a certain candidate holds, then it means they are beyond the pale, that no Decent Person should even consider praising any part of their candidacy.

Pollitt's column strikes a balance that Greenwald's lacks. Unlike Greenwald, Pollitt is candid about which aspects of Paul's platform she admires and which she holds in contempt.

Ironically, Greenwald agrees with Pollitt and disagrees with Paul about the merits of the social welfare state, abortion rights, and countless other issues. He is not okay with racism, homophobia, or black helicopter conspiracy theories which Paul has associated himself with over the years in his newsletters--by either writing those ideas himself or by signing his name to ghostwritten products expressing those views and getting rich off them.

Greenwald is adamant that he's not endorsing Paul, i.e., not telling people they should vote for Paul. Okay. But he's pretty sympathetic to Paul within the context of the Republican primary. After all, Paul's the closest thing civil libertarians have to a standard bearer on the national stage right now.

It is rhetorically ineffective and embrassing to admit that your guy is strong on drugs and war, but a complete crank on economics who wants to destroy the federal government to save the Republic.

Instead of taking the measure of the man in full, Greenwald goes on the offensive against a largely imaginary contingent of fallacy-prone progressives who won't let anyone say anything nice about Ron Paul.

Greenwald chooses to deflect attention from the more noxious aspects of Paul's ideology that he must consider ugly for much the same reason that some partisan Democrats are squeamish about contesting Obama's record on indefinite detention, the war on drugs, and the war in Afghanistan. They've decided that they like their guy enough to talk up his good points, despite his flaws.

That's basically what Greenwald is doing for Ron Paul in the primary, except Greenwald has the luxury of knowing that Paul has no chance of becoming president.