Contraception Compromise: Insurers Take One for the Team 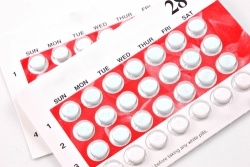 The Obama administration struck an elegant compromise over birth control coverage under health care reform. When religious employers refuse to pay for contraception, their insurance companies will have to step up and cover the cost of birth control for those employees.

Of course, just because birth control is relatively cheap doesn't mean it's free. It costs about $21.40 to add birth control pills, IUDs, and other contraceptives to an insurance plan. That money is going to have to come from somewhere.

Already Catholic special interests are objecting to funding contraception out of overall premiums because that means they're funding contraception indirectly. This kind of intransigence illustrates how foolish it was to try to compromise with this constituency in the first place. They are professionally unreasonable.

Compromise is illusory because these guys are doing spiritual accounting, they are not constrained by generally accepted accounting principles. They will make up the rules to get the result they want, namely, "We're being oppressed by your birth control!"

The U.S. Council of Catholic Bishops hates the fact that any woman might get free birth control under health reform. No matter how this program is administered, the sophists at the USCCB will come up with a sob story about how they are being oppressed by our contraception cooties. We live in a highly interdependent society with complex organizations and multiple intersecting streams of public and private money. If you're creative enough, you can always figure out why a dollar somebody else spends on birth control is tainting you.

Covering birth control out of the premiums of non-religious employers means that secular businesses would be subsidizing birth control for workers who aren't on their payrolls, which would be unfair. Why should General Motors pay extra to subsidize insurance for the employees of Catholic hospitals? Remember that health benefits are a form of compensation. Every extra dollar your employer spends on health insurance is a dollar that's not going to your salary. So, utlimately, if only non-religious employers end up paying for birth control, their employees are also taking a hit to indulge the bishops.

If this compromise shuts up the bishops and smooths the way for free birth control, it's worth doing. In the grand scheme of things, it's not very much money. As the employee of secular organizations, I'm okay with subsidizing somebody else's birth control. It's not fair, but unlike the bishops, I'm a pragmatist. The most important thing is getting birth control to people who need it.

But if the bishops won't accept this deal, Obama should stop trying to accomodate them. Respect for religious freedom does not include paying solemn lip service to the contraception cooties.