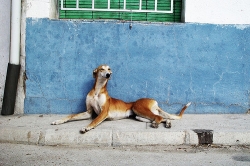 Greyhound racing persisted in the U.S. despite a dwindling fanbase because state legislators believed that cruelty to animals provided a veneer of respectability for other forms of gambling.

It's hard to imagine the thought process behind the racing dispensation: "I guess they can play cards for money, just as long as they keep killing dogs."

Today, many track owners are ready to give up the ruse, and they're lobbying to change the laws that force them to keep up the greyhound racing as a figleaf for their casinos:

After a decade in which more than half the greyhound tracks in the country have closed, many of the remaining operations have survived thanks to the model used at Bluffs Run. Over the years, the tracks, which were there first, won permission from states to add slot machines and poker tables under the condition that a chunk of the profits go to the dog races — essentially subsidizing one form of gambling with another.

Now, after years defending greyhound racing against attacks that it is inhumane, a growing number of track owners are, to the astonishment of opponents and the dismay of fans, joining the critics among the animal rights groups. Complaining that they are being forced to spend millions of dollars a year to subsidize a pastime that the public has all but abandoned, greyhound track owners in Iowa, Florida and Arizona have been lobbying for changes in the law that would allow them to cut the number of races, or even shut down their tracks, while keeping their far more lucrative gambling operations running. [NYT]

Good idea. At least when your video lottery machines run slow, you can throw them away without killing them.