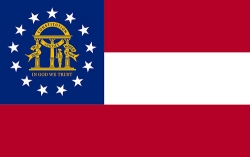 Georgia's state flag: "A man with sword drawn is defending the Constitution, whose principles are wisdom, justice and moderation." Oh, the irony.   50States.com.

The Georgia abortion ban is on its way to the governor's desk, Lauren Barbato reports for the Ms. Magazine blog:

After an emotional 14-hour workday that included fist-fights between lobbyists and a walk-out by women Democrats, the Georgia House passed a Senate-approved bill Thursday night that criminalizes abortion after 20 weeks.

The bill, which does not contain rape or incest exemptions, is expected to receive a signature from Republican Gov. Nathan Deal.

Commonly referred to as the “fetal pain bill” by Georgian Republicans and as the “women as livestock bill” by everyone else, HB 954 garnered national attention this month when state Rep. Terry England (R-Auburn) compared pregnant women carrying stillborn fetuses to the cows and pigs on his farm. According to Rep. England and his warped thought process, if farmers have to “deliver calves, dead or alive,” then a woman carrying a dead fetus, or one not expected to survive, should have to carry it to term.

The bill as first proposed outlawed all abortions after 20 weeks under all circumstances. After negotiations with the Senate, the House passed a revised HB 954 that makes an exemption for “medically futile” pregnancies or those in which the woman’s life or health is threatened.

Roe guarantees a woman's constitutional right to an abortion up to 24 weeks, but Georgia legislators don't care. The constitution doesn't cover livestock.