Naomi Schaefer Riley: You Knew What I Was When You Picked Me Up 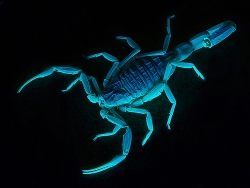 Remember the fable of the frog and the scorpion? A scorpion asks a frog to ferry him across the river. The frog balks at this request because he's afraid the scorpion will sting him. The scorpion assures the frog that he would do no such thing because it wouldn't be in his interest to sting the frog because then they would both drown. The frog agrees. As they are crossing the river, the frog feels a searing pain in his side. "What did you do that for," the frog demands, "Now we're both going down!" The scorpion replies, "You knew what I was when you picked me up."

I was reminded of this fable by Naomi Schaefer Riley's op/ed in the Wall Street Journal. Schaefer Riley was fired from her blogging gig at the Chronicle of Higher Education for singling out three African American studies dissertation titles for ridicule. She argued that these dissertation titles proved why the entire discipline of African American studies should be purged from the academy.

Schaefer Riley admits that she hadn't read these dissertations, but she had no compunctions about assailing the work of three grad students by name.

Note that academics read the Chronicle the way that New York media types read Gawker. Being called a disgrace to your discipline in the CHE is a crushing blow for a young scholar. I mean, consider the source, but still....

Schaefer Riley's main self-defense is that she made the same arguments in a book she wrote before the Chronicle hired her.

She scoffs at the idea that she should have read these dissertations before attacking the students by name. Her disregard for the facts justifies the Chronicle's decision to fire her all by itself.

Schaefer Riley doesn't think it's necessary to evaluate scholarship before pronouncing it worthless. In her view, it's self-evident that any dissertation about black midwifery, or race and the housing crisis is without scholarly merit. That's the kind of knee-jerk political thinking that she is projecting onto the entire discipline of African American studies.

Schaefer Riley is trying to paint herself as a victim of political correctness. She's no such thing. The Chronicle fired her for impugning the reputations of scholars with no evidence. She proudly declared herself guilty as charged in the pages of the Wall Street Journal. QED.

The question is not why she got fired, but why the Chronicle picked her up in the first place.