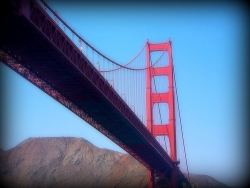 Julie Ruvolo, a Forbes columnist and the digital editor for the New York Museum of Sex, delivered a relentlessly logical presentation at Personal Democracy Forum about why anti-sex-trafficking activists' crusade against the Village Voice's classifed ad service Backpage.com is misguided. Some high-profile activists in the anti-trafficking community have teamed up with over forty state attorneys general in a bid to shut down online advertising service.

Ruvolo began with the metaphor of the Golden Gate Bridge. The bridge is a magnet for jumpers, but its administrators refuse to put up barriers to deter them. The suicide threat could be eliminated by simply tearing the bridge down, Rovolo noted, adding that if that seemed like an extreme and counterproductive "solution," so too should the anti-Backpage campaign.

No one disputes that some fraction of the thousands adult services ads that appear on the online classifed service are selling the coerced services of trafficked women and girls. However, the illicit ads account for a small fraction of the adiult ads on Backpage.

The Voice argues that it is already building barriers and safety nets to keep those bad ads from slipping through. The Voice claims that it is using filtering software, requiring a credit card number to place an ad, and hiring human inspectors to weed out questionable content. Assuming the Voice is telling the truth, and that its methods are reasonably effective, erecting barriers seems like a far more reasonable solution than shuttering Backpage.

However, I would argue that we should be skeptical of any company's claim to police itself when self-policing involves turning away paying customers. In order to earn our trust, the Voice will need to keep up a high level of transparency regarding its screening procedures.

The Voice predicts, quite reasonably, that if Backpage were shut down, the bad ads would be scattered across more websites, where they would be more difficult to monitor.

Some traffickers are currently posing as as sellers of adult services on Backpage.com. If justifies shutting down the entire service, Ruvalo asked, what happens when traffickers start posing as lonely singles on AdultFriendfinder or college coeds in search of sugar daddies on Seeking Arrangements, or people who want to sell their couches on Craigslist? (Traffickers already use an elaborate and shifting array of codewords to indiciate to interested buyers what they are really selling.) Will we have to shut those sites down, too?

Ruvalo made a convincing case that it's better to give up the endless game of whack-a-mole, which earlier claimed Craigslist's adult ads to no visible benefit, and focus on building barriers to keep ilicit ads off Backpage. It's not a perfect solution, but it sure makes more sense than burning down the bridge to stop the jumpers.