The Problem with ‘Paper Abortions’ 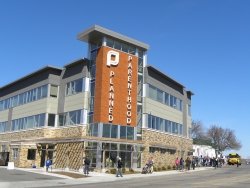 A Planned Parenthood Clinic in St. Paul, Minnesota. When it comes to pregnancies, those carrying the child have the final say. (Fibonacci Blue / Flickr / Creative Commons)

Last week, the New York Times published an op-ed titled, “Is Forced Fatherhood Fair?” The author, Laurie Shrage, argued that, since a woman has the right to decide whether or not to carry a pregnancy to term, men should have the right to unilaterally opt out of fatherhood (which some proponents call a "paper abortion.") Fair’s fair, right?

Not so fast. Since a woman is carrying the pregnancy in her body, she gets to decide whether or not it results in a child. Since men can only cause pregnancies in other people’s bodies, they cede control over whether sex will ultimately result in a baby. The only alternative would be to give biological fathers the right to force the women carrying their babies to have abortions or give birth, which is clearly unacceptable.

The fact remains that a man who gets a woman pregnant is partially responsible for that child coming into the world, even if he didn’t have the final say. He knew from the outset that he might cause a pregnancy, and that he didn’t control the woman’s ultimate reproductive decision. Therefore, he owes it to his child, and to society at large, to pay child support. If you eat the second-to-last donut on the plate, you may not have the final say over who eats the last one, but you’re still obliged to chip in towards the next box.

Shrage’s proposal for voluntary fatherhood is supposedly motivated by a desire to put men back on an equal footing with women in a world where women can (at least in theory) terminate pregnancies at will. Yet by supporting a woman’s right to abortion, Shrage and other champions of the so-called paper abortion also tacitly acknowledge that pregnancies are not morally equivalent to children. Presumably, they don’t support the right of men or women to kill their unwanted children.