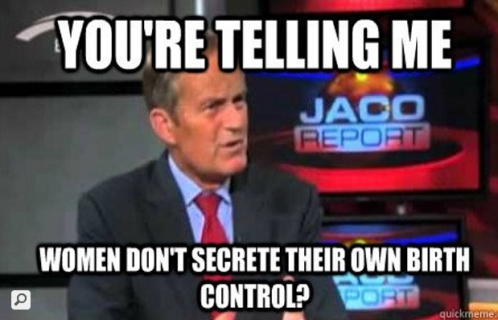 Last summer, Missouri Rep. Todd Akin explained that according to 'doctors,' women's bodies can 'shut down' conception--in cases of 'legitimate rape,' that is.

People hate and fear what they don't understand. There is no more vivid illustration of this truism than the pronouncements of the religious right on sex and reproduction.

Rep. Todd Akin (R-Mo.) set the gold standard for medical inaccuracy when he dragged the "legitimate rape" canard onto the national stage during his senate race, leaving a perplexed nation wondering what the hell he meant. "If it's legitimate rape," Akin opined, "the female body has ways to try to shut that whole thing down."

The notion that rape never results in conception was used to unfairly discredit rape allegations for hundreds of years before science discredited the idea, but the modern anti-choice movement revived this dud in a disingenuous bid to convince the public that abortion bans don't need rape exemptions. One paper in particular, contained in a 1972 volume funded by Americans United for Life, has been, uh, seminal in reviving the myth in anti-choice circles. The author's evidence for this claim ranges from a pseudoscientific "experiment" from a Nazi concentration camp to his assertion that rapists masturbate too much to get their victims pregnant. The backlash against Akin's "legitimate rape" probably cost him the senate race. Akin's claim became the best known of a series of ignorant and condescending remarks about women's health by Republican candidates in 2012 that helped discredit Republicans in the eyes of women voters.

This month, as Texas debated an anti-abortion bill, anti-choice Republicans have been spouting misinformation so fast and so furiously that it's difficult to keep all the myths straight. For your reference, I offer this handy crib sheet of the latest Republican reproduction howlers.

It's depressing to think that these befuddled folks think they know better than women and their doctors when it comes to health care.

But take heart: If it's legitimate bullshit, the female brain has ways of shutting that whole thing down.