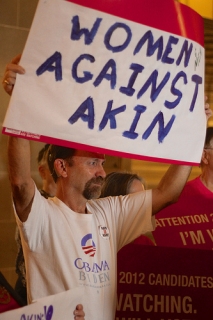 Last year, Republican senate candidate Todd Akin gained instant nationwide notoriety with his assertion that “legitimate rape” doesn’t cause pregnancy. “If it’s a legitimate rape, the female body has ways to try to shut that whole thing down,” Akin said.

Akin’s opinion was so wildly implausible to anyone with a third-grade understanding of human reproduction that it seemed as if he must have been voicing a wholly original crackpot theory. As it turned out Akin, was parroting a view widely held by anti-choice extremists. In an attempt to excuse the lack of rape exemptions in their proposed abortion bans, extreme anti-choicers have seized on the convenient fiction that rape never causes pregnancy anyway.

The notion that pregnancy is somehow incompatible with rape has cropped up repeatedly in Western medicine and law over the centuries. An early version on the myth posited that pregnancy from rape was impossible because female orgasm was essential to conception. The assumption was that if a woman turns up pregnant, she must have had an orgasm, and therefore she couldn’t have been raped because rapes never cause orgasms. We now know that female orgasm is not necessary for conception and that orgasms during rape are relatively common.

But the legitimate rape myth was far too useful to be killed by decisive empirical evidence. It was reformulated in a more superficially plausible guise. The new version is that the stress of rape biochemically inhibits ovulation. Like a lot of pseudoscience, the theory builds on a germ of scientific truth. It’s true that various kinds of physical and emotional stress can interfere with ovulation. However, that doesn’t imply that all stress inhibits all ovulation. Besides, many pregnancies arise from eggs that were released prior to the sex (or rape) that fertilized them. So, unless rape causes time travel, the model can’t possibly be correct.

Slate legal analyst Emily Bazelon credits Dr. Fred Mecklenburg with introducing the modern myth to anti-choicers in a 1972 anthology financed by Americans United for Life. Mecklenburg claimed that Nazi doctors subjected female concentration camp inmates to mock executions and observed them to see if they would ovulate the next month. Allegedly, many did not, which Mecklenburg took as proof that extreme stress suppresses ovulation and, therefore, that the stress of rape is its own defense against pregnancy.

Mecklenburg’s extrapolation is less than convincing even if you assume the experiment actually happened. Did the experimenters control for the other factors associated with being in a concentration camp, like malnutrition, that are known to suppress ovulation? Is an experiment that measures the effects of mock execution a valid proxy for the effects of rape? Was Mecklenburg naive enough to take concentration camp experiments, rooted in racist pseudoscience and driven by the imperatives of the Nazi propaganda machine, at face value?

It turns out these questions are moot because leading bioethicists and historians of medicine now think it’s doubtful that the mock execution experiment ever happened. Hermann Stieve, a famous German gynecologist, used the bodies of executed Nazi prisoners to study the effect of stress on female reproduction, but there is no evidence that subjected anyone to mock executions or studied the effect of rape on pregnancy.

So, as Bazelon observes, the “legitimate rape” theory is in even worse shape than we thought. It wasn’t just based on tainted Nazi research, it was based on total fiction.