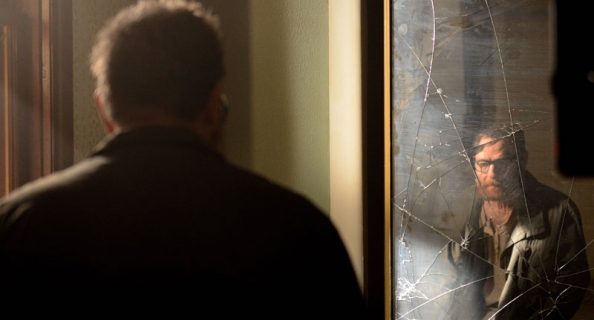 The final half-season of Breaking Bad begins with one of the show’s trademark flash-forwards. As usual, the viewer’s task anticipate the circumstances that brought about the scene. Walt returns to his now-abandoned house to retrieve the ricin cigarette he stashed behind the switchplate. The house has obviously been vacant for some time. Walt has to cut the lock on the cyclone fence that has been erected to cordon off the decrepit structure from the rest of the neighborhood. The state of the house can’t be a surprise to Walt, after all, he came with bolt cutters. Neighborhood kids have turned the empty pool into a skatepark. When Walt’s neighbor Carol sees him getting out of his car, she drops her groceries in horror. Clearly, something terrible has happened. In previous seasons, the house has been a family oasis, even as Walt has gone off to do desperate and dangerous things. The trashed house hints that whatever horror Carol is re-living was visited upon Skyler and the kids.

Interestingly, Future Walt is sporting Sasquatch-grade hair and a beard to match. Has he finally beaten the cancer, or simply given up on chemo?

The action shifts back to the present-day. Walt has only been out of the meth business for a month when Hank stumbles upon Walt’s inscribed copy of Leaves of Grass, which Walt foolishly left out as bathroom reading.  Hank recognizes the meticulous hand of  Gale Boetticher, the murdered chemist: "To my other favorite W.W. It's an honor working with you. Fondly, G.B." The inscription matches a passage in Boetticher’s lab manual which fell into the DEA’s hands after his murder. Hank remembers Walt joking about being the “W.W.” in Gale’s lab book. After all this time, Hank finally realizes that Walt is Heisenberg. The fact that it took Hank so long to see what was right in front of him was a vindication of Walter’s bitterness. Hank, a macho DEA agent, has always seen the scrawny, geeky Walt as a lesser man. For his part, Walt dismissed Hank as a meathead and fatally underestimated Hank’s brilliance as an investigator. If these two male superiority complexes hadn’t meshed so perfectly, Heisenberg would never have been born.

Hank orders old boxes of evidence brought to his house. The scene of Hank sorting through crime scene photos is a clever montage/recap that recalls five seasons of plot twists and reminds us of which of Walt’s atrocities Hank already knows about, and which he has yet to uncover. Hank even finds a sketch of Walt in his trademark Heisenberg hat and sunglasses. Recall that the Salamanca brothers left the sketch as an offering to Saint Death in Season 3 before they crossed the border on a mission to kill Walt. They ended up shooting Hank instead.

Hank plants a GPS device on Walt’s car, which Walt finds. When Walt confronts Hank, Hank decides, for whatever inexplicable reason, to lay out his case against Walt, including the mass jailhouse extermination of witnesses, and the nursing home bombing.

Walt tells Hank there’s no point in trying to prosecute him because his cancer is back and he’s dying. That’s plausible enough, given that we saw Walt getting a chemo infusion earlier in the episode. If Hank prosecutes Walt, Skyler will be left a penniless widow. The courts won’t let her keep his ill-gotten assets. She’ll be lucky to stay out of jail herself. Hank seems unmoved by Walt’s appeal to family, so Walt defaults to Heisenberg mode and threatens Hank’s life. Hank stammers that he doesn’t know who Walt is anymore. “If that’s true and you really don’t know who I am, perhaps your best course of action is to tread lightly,” Walt replies.

The unspoken context of this discussion is that if Hank turns Walt in, he could be torpedoing his own career at the DEA. Why didn’t he notice that his brother-in-law was Heisenberg all along? The episode is a genuine cliffhanger. We have no idea what Hank is going to do when the garage door opens. It seems highly unlikely that Hank will march Walt down to the police station immediately. My guess is that Hank will tread lightly for the time being, or at least pretend to.

Meanwhile, Jesse is cracking under the strain of his own remorse. He starts desperately trying to give away the millions that Walt called “blood money.” By the end, Jesse is literally throwing money around, pitching stacks of bills onto people’s stoops, much to the consternation of his lawyer and Walt. Jesse has also quietly concluded that Walt killed yet another person he cared about, his mentor Mike. Over and above the practical problem of restraining an unhinged accomplice who seems determined to get caught, Walt is determined to control Jesse. If Jesse definitively breaks with Walt, Walt’s rage could be murderous.

The central question of the half-season premiere is who Walt’s stalking with the ricin cigarette. At this point, it could be Jesse or Hank.