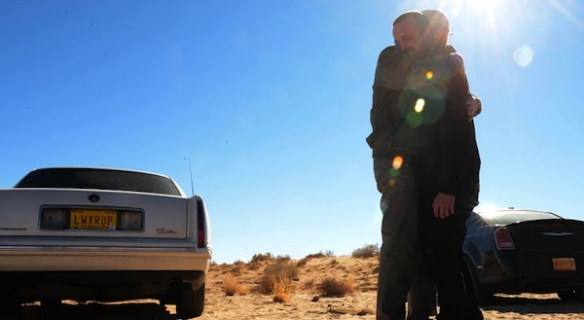 In this episode, the writers elegantly orchestrate a decisive break between Walt and Jesse. A split in their deeply dysfunctional relationship seemed imminent when Jesse figured out that Walt killed Mike, but the writers have been steadily ratcheting up the suspense by having Jesse repeatedly stick by Walt under duress. The money-throwing tantrum was what Jesse did instead of what he really wanted to do, namely, breaking up with Walt for killing Mike. The suspense builds because we’re wracking our brains to figure what it’s going to take to make Jesse see the light.

In this episode, Jesse holds up under Hank’s interrogation, even when Hank hints at a very attractive plea deal.

Jesse knows that Walt is using him, and even tells him so during their parley in the desert, but Jesse’s resolve proves no match for Walt’s bear hug. At first, Jesse stands stiff and unwilling, but he eventually relaxes into Walt’s hold, sobbing.

At Walt’s request, Jesse agrees to disappear with the help of Saul’s mysterious identity reassignment service. As Jesse’s about to climb into the getaway car to start his new life in Alaska, he reaches into his pocket for his pot and finds it gone. He realizes that Saul’s henchman Huell, who drove him to the rendezvous point, lifted the baggie from his pocket and replaced it with a pack of Jesse’s own cigarettes. Jesse suspected Huell of stealing the ricin cigarette in Season 4, but Saul reassured him the Huell had fingers like sausages and couldn’t possibly pull off that kind of sleight of hand. At the time, Jesse blamed himself for losing the cigarette. At last, he realizes that Huell stole it to give to Walt, on Saul’s orders. Jesse concludes that Walt poisoned Brock and storms back to extract a gunpoint confession from Saul.

Jesse is out for revenge. He starts by dousing Walt’s house with gasoline. Attacking Walt’s house is a symbolic attack on Walt’s family, retribution for Walt’s attack on Brock. Jesse knows that Skyler and the kids live in that house, but he doesn’t check to see if anyone’s home. For the past several seasons, Jesse has been a voice of humanity who held onto his concern for the weak and the innocent, even as he did terrible things in the drug trade. Has Jesse finally broken bad? In a stroke of genius, the episode ends before Jesse can strike a match. Presumably, something’s going to happen to stop Jesse from igniting all that the fuel in Walt’s foyer because the house is still standing in the flash-forward. The most likely antagonist is Walt, who’s on the move and armed with a pistol, having been tipped off by Saul. Will Walt be able to manipulate Jesse back into the fold one more time, or have they finally broken up for good?