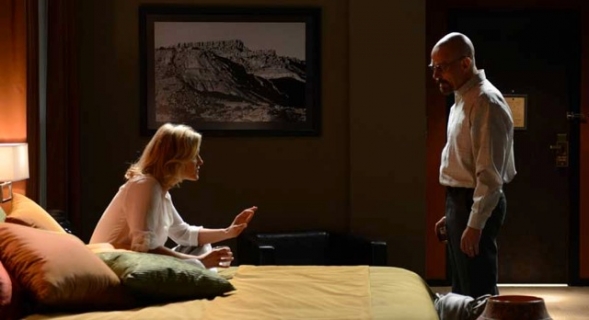 When Skyler learns that Jesse doused the White family home with gasoline, Walt tries to keep his wife focused on the bright side: At least Jesse didn’t follow through with his plan to burn the house down. As usual, Skyler sees the vodka glass as half-empty: A drug-crazed maniac is stalking her family and she’s in no position to go to the police. She demands that Walt kill Jesse. Surprisingly, he resists. Walt is so cocksure of his ability to manipulate Jesse that, instead of calling in a hit, he invites Jesse to meet him in a crowded plaza to talk things over.

Walt doesn’t realize that Hank has finally risen to the occasion and forged a bond with Jesse. "You really wanna burn him down?," Hank asks in flashback, as Jesse clutches a burning lighter in Walt’s gas-soaked living room, “Let’s do it together.” Hank being Hank, he achieves emotional intimacy at gunpoint, but we all have to play to our strengths.

Instead of taking Jesse to jail, Hank puts him up in the Schrader guest room. After hearing Jesse’s confession, Hank and his partner Gomez (who has manifested without further exposition) decide Jesse’s confession isn’t enough without physical evidence. That sounds like a euphemism on Hank and Gomez’s part. They have plenty of evidence to arrest Walt for cooking huge amounts of meth, based on his fake confession. What they really need is evidence that absolves Hank of Walt’s false accusations of orchestrating the entire Crystal Blue conspiracy.

Jesse is convinced that Walt will kill him if he shows up at the plaza, but Hank orders him to wear a wire an elicit a confession. With Jesse out of the room, Hank admits to his partner that he doesn’t care whether the meeting ends with a confession or a murder, because either way, he’ll have enough to get Walt.

As he approaches Walt in the plaza, Jesse thinks he sees a bald hitman poised to shoot him. Jesse changes course and retreats to a payphone where he makes a threatening call to Walt. “Next time, I’m going to get you where you really live,” Jesse snarls.

When Jesse isn’t looking, a little girl runs up to the bald guy yelling, “Daddy, daddy.” He wasn’t a hitman after all.

No doubt interpreting Jesse’s comment as a threat against his children, Walt finally calls Todd and says he might need him to do a job. The implication is that Walt has decided to have Jesse killed.

Amanda Marcotte argues that the botched meeting is a bit of tragic irony in which Jesse’s well-justified paranoia costs him his last chance at survival. Others contend that the sight of the bald guy in the plaza triggered some kind of brainstorm for Jesse that gave him new hope of besting Walt.

Jesse flees the plaza and at first it seems as if he’s written off both Hank and Walt, but when Hank brings the car around Jesse jumps right in and announces that he has a better plan to get Walt. The fact that Jesse’s still cooperating with Hank means that their immediate goal is a conviction. So, if Jesse and Hank are going to bring down Walt together, they need evidence.

So, where does Walter White really live? That’s the central question of Breaking Bad in a nutshell. Does Walt still care about his family, or is he driven purely by his lust for power? Jesse, who takes a dim view of both child-killing and Walt’s motives, probably assumes the latter. Walt’s a dying man, so there’s only so much vengeance to be had in sending him to prison. In order to really get back at Walt, Jesse’s going to have to humiliate him.

Maybe Jesse has decided to go after Walt’s money. Walt says he wants the money for his kids, but really, dying with a big pile of cash is Walt’s way of winning. Earlier this season, Walt seemed more upset about losing his cash than about his own impending death. Besides, money is evidence.

Jesse doesn’t know where Walt’s cash is, but he knows Saul has some idea. At any rate, Saul knows enough about the Crystal Blue conspiracy to convict Walt and exonerate Hank, and the vaults of Saul’s office are treasure troves of hard evidence. Saul normally relies on attorney/client privilege to conceal his crimes, but attorney-client privilege doesn’t apply if a client hires a lawyer to commit a crime. The DEA doesn’t usually know what clients and lawyers talk about behind closed doors, but in this case, Jesse can tell them what really goes on in Saul’s office.

We still don’t know where Walt lives, but clearly he would rather lose his house than lose a battle of wits with Jesse and Hank.