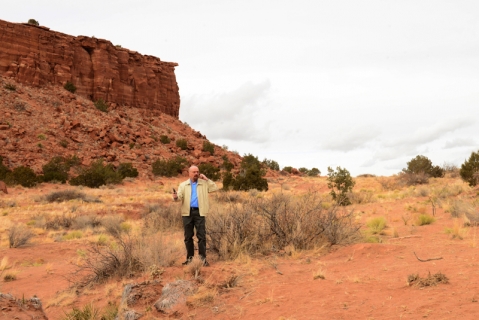 Hank’s ingeniously staged cellphone photos and Jesse’s inspired telephonic bluffing lured Walt back to his own secret cache. The scheme worked because Walt didn’t anticipate that his two adversaries would join forces against him. As I predicted last week, Jesse’s plan to beat Walt ran through Saul Goodman, because Saul was the closest known link to Walt’s money, the only evidence Walt would never destroy.

Hank slaps the cuffs on Walt and Jesse spits in Walt’s face and we rejoice in their triumph. Whatever happens next, Walt has met the worst fate he can imagine: he has been bested by men he considers to be his intellectual inferiors.

Then brute force, in the form of heavily armed neo-Nazis, shows up to remind us that cleverness doesn’t always carry the day. Hank and Jesse finally win at Walt’s game, it ceases to be Walt’s game. The false promise of Heinsenberg was that ingenuity and guile could trump brute force in the drug trade. Walt had the hubris to think that if he were smart enough and shrewd enough, he could beat the career gangsters at their own game. Walt naively thought he could take the money and walk away. Hank had the hubris to think that investigative finesse and due process could halt the terrible forces that Walt’s crime spree has unleashed. With Walt’s taped cell-phone confession in hand, Hank thought he could lock up Walt and go back to his job and his wife. When he calls Marie from the crime scene and talks about what time he’ll be home, we know he’s not coming home.

Walt survives the shootout; we’ve seen as much in the flash-forwards. But he will pay a terrible price. He’ll leave To’hajiilee as a pawn of the neo-Nazi drug cartel, who need him to teach Todd to cook the Crystal Blue. In the world of Breaking Bad, nobody gets to walk away.