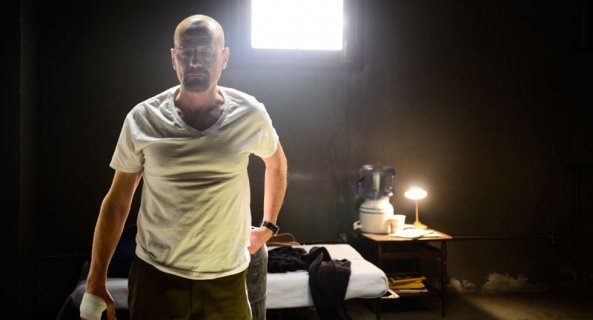 In “Granite State” we finally learn what Walt was doing in New Hampshire. The vacuum salesman/rehoming specialist sends Walt to live like a hermit in rural N.H. because his case is too hot to put him anywhere else. The state is synonymous with stoic masculine independence, so it’s a great setting to make a point about the limits of Emersonian self-reliance. Secreted away in a remote cabin with no human contact, Walt belatedly discovers that he really needs other people. Emerson claimed that every man is a genius when he rejects conformity and trusts in his own thoughts. Walt discovers that being alone with his thoughts is torture. There’s no point in being a genius if you have no one to talk to. Money can insulate you from others to a point, but if you have no one to exchange it with, it’s just so much paper.

“Granite State” builds up Walt’s vulnerability and then dashes our reemergent sympathy for him. As horrible as Walt has been, it’s hard watching him waste away in a freezing cabin. Walt has behaved monstrously, but he’s still human enough to be lonely. There’s a heartbreaking shot where Walt carefully strings his wedding ring to wear around his neck when he becomes too emaciated to keep it on his finger.

Saul gave Walt some sound advice before vacuum man dispatched him to Nebraska: Go home and take the fall for Skyler, or the DEA will take the house and send her to jail. Don’t try to send her money because you’ll incriminate her. Remember that Mike was a criminal mastermind with infinite patience and even he couldn’t get his nest egg to his granddaughter. Even jail is better than dying alone.

Alone in the woods, Walt realizes that his plan to hire a squad of mercenaries to kill the Nazis is a pipe dream. After months of agony, he finally struggles down the hill and makes a desperate attempt to send a little cash to junior, who rebuffs him and demands to know why Walt isn’t dead yet. Defeated, Walt calls the DEA to turn himself in. As Saul explained before he was whisked away to Nebraska, this is the last thing Walt can actually do for his family. If he doesn’t come back now, the feds will take the house and go after Skyler.

Before the feds arrive, Walt sees his old business partners, Gretchen and Elliott on TV denying his contributions to the success of Gray Matter. Walt is so furious that he abandons his plan to turn himself in and sets out on one last mission. It’s not clear whether he’s going after his old friends, or the Nazis, or both. Regardless, Walt proves that he cares more about settling petty scores than about taking care of his family.

I predict that Gray Matter will figure prominently in next week’s finale. Gray Matter’s success represents all Walt’s frustrated entitlement. Walt’s self-imposed exile from the company he helped to found is the root of his bitterness. It made him the man he is today.

When Gretchen and Elliott offered to pay for Walt’s cancer treatment, he refused. After a disastrous first foray into meth cooking, Walt plunged back into the business after confronting Gretchen and accusing her of stealing his research to build her empire. Later, when Walt refused a $5 million buyout from the meth business, he told Jesse he wasn’t about to sell out for a pittance like he did at Gray Matter.

The circumstances of Walt’s departure from Gray Matter are important because they set the moral context for everything that follows. If Walt left Gray Matter for petty reasons, that makes his refusal of Gretchen and Elliott’s help even more petty. A lot of people have disabled children, abusive bosses, cancer, and lousy medical insurance, but most of them don’t have rich friends offering to bail them out with no strings attached. Walt’s character is a study in the toxic effects of male privilege and overweening entitlement. It’s hard to imagine a mother in Walt’s situation opting for a risky illegal scheme over a ready offer of help, even if she had to swallow her pride to do it.

Whenever anyone wants to argue that Walt is something less than a monster, they invariably point out that he got into the business to provide for his family. The most heated Breaking Bad debates are about whether Walt still cares about his family, or if he ever cared about them. If Walt left Gray Matter for stupid reasons, that proves that he never cared about his family, and whole meth-cooking escapade was just an excuse to prove himself to Gretchen and Elliott.

The writers have strongly implied that Walt left Gray Matter because his relationship with Gretchen soured. Like many viewers, I assumed Gretchen either left Walt for Elliott or cheated on Walt with Elliott. That’s probably not it, though. Walt abandoned Gretchen abruptly and without explanation while they were vacationing with her family and Gretchen and Elliott only got together after Walt left her.

Walt’s reasons for leaving Gretchen have never been explored on screen, but Jessica Hecht, the actress who plays Gretchen, said Vince Gilligan supplied the following backstory to her and Bryan Cranston before their big confrontation in “Peekaboo”: Walt left because Gretchen’s wealthy parents triggered his inferiority complex. We still don’t know why Walt left the company, or why he sold his shares for a mere $5000. Knowing Walt, it could have been an irrational fit of beta-male pique, or simple financial desperation brought on by knocking up sweet, non-threatening Skyler while on the rebound from Gretchen.

But what if Walt’s breakup with Gray Matter was over something more substantial? Gray Matter is a pharmaceutical company that’s involved in crystallography. Walt learned the skills he used to cook meth while he was co-founding the company. Maybe it’s not just Walt’s pride that prevented him from accepting Gretchen and Elliott’s assistance in his hour of need. Maybe his break with Gray Matter was over something really bad. What if young Walt quit because he feared Gray Matter’s technology could be used to make illicit drugs? What if he realized that Gray Matter was taking venture capital from shady investors with ulterior motives, or dabbling in illicit activities of its own? Maybe Gray Matter and Madrigal are connected. I suspect they might be. There’s not enough screen time to deal with the Nazis and Gray Matter separately, and it would be very convenient if Walt figured out how to get at one through the other.

The flash-forwards of this season have been setting us up to believe that Walt is going to hunt Nazis. Why else would he need that machine gun? But the writers have also established that Walt is in no physical shape to be hunting anyone. It would trite and, frankly, out of character for Walt to simply go down in a hail of bullets against the Nazis. He leaves on a final mission to prove that he’s a genius, not an action hero. Walt doesn’t want to be remembered for his physical courage, or his noble deeds. He wants to go out as the smartest guy in the room. Mowing down a bunch of obscure neo-Nazi bikers with a machine gun isn’t going to impress the Gretchens and Elliotts of the world.

I think Walt has something bigger in mind. If he’s going to pull off a dramatic exit, he’s going to have to leverage the resources of another entity, like Gray Matter, or Madrigal. When she last saw Walt, Gretchen made a point of saying that, despite everything, her offer of treatment still stands. Maybe Walt will use that as an opportunity to insinuate himself back into Gray Matter.