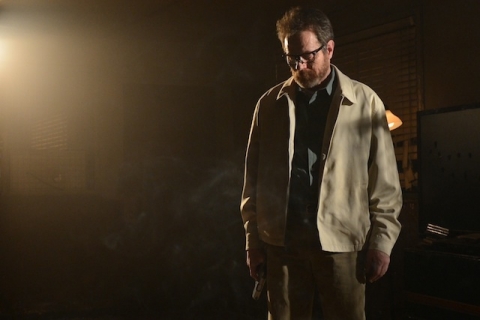 The finale episode was fun to watch, but it fell short of the moral vision that Vince Gilligan promised. (Ursula Coyote / AMC)

As far as I’m concerned, Breaking Bad ended in the wilds of To’hajilee, with Hank slipping the cuffs on Walt and Walt realizing that he had been beaten in a battle of wits with men he regarded as his inferiors. Walt’s humiliation is only matched by his horror as Hank is murdered by a force Walt set in motion but failed to control. The series should have ended there, with Walt suffering the full consequences of his actions.

The finale episode was great TV: brilliantly acted, well shot, and fun to watch, but it fell short of the moral vision that Vince Gilligan promised us. The ending felt like a sop to the Team Walt fanboys who tuned in each week to watch Heisenberg be a badass, morality be damned.

Sure, it felt good to watch Walt’s homemade machine gun turret mow down unsuspecting Nazis in Uncle Jack’s living room. But the final episode did not give us the moral clarity that Vince Gilligan had been promising. The last two episodes, “Ozymandias” and “Felina,” felt like rush jobs to rehabilitate Walt just enough so we could root for him as an avenging angel of justice.

Walter White got so much better than he deserved, including the death he’d wanted from the moment he was diagnosed with lung cancer. Walt wanted people to remember him as vital and powerful, not sick and diminished. He got his wish. When he realized he was fatally wounded, Walt went to die in the bikers’ lab, with a serene expression on his face and his trademark respirator by his side. His last act was to reach out and caress one of the gleaming tanks, literally leaving his fingerprints on the operation that he designed, as if to say, “Look on my works, ye Mighty, and despair!” Walt never cooked in the bikers’ lab, but his final gesture guaranteed that he would be remembered as Heisenberg, the man behind the blue meth

Walt’s gunshot wound shortened his life only slightly, compared to the lung cancer that would otherwise have killed him. Before he died, he got to to vanquish his enemies with science and technology. He not only cut down the Nazis in Uncle Jack’s own home with his makeshift machine gun turret, he got to watch Jack beg for his life the way Hank refused to do in the desert and shoot Jack anyway. He didn’t just poison Lydia, he got to call her and taunt her about slipping the ricin into her Stevia.

I was expecting that Walt would be forced to watch the deaths of the children he used to justify his criminal adventure. But Walt even managed to provide for his family. He did it by terrorizing his old friends from Gray Matter and forcing them to launder his last barrel of money to give to Walt, Jr. on his 18th birthday. The fact that Walt probably managed set his family up with nearly $10 million partially vindicates his decision to cook in the first place. The fact that Walt’s departure from Gray Matter is never fully explained gives the viewer the option of interpreting Walt’s extortion gambit as yet another score justly settled.

All Walt has to do is offer up a modicum of truth to poor Skyler. Before he goes off to exterminate the Nazis, Walt admits that he cooked for himself: “I did it for me. I liked it. I was good at it. And I was, really... I was alive.”

The last five seasons of Breaking Bad were about how Walt was deluded in his sense of entitlement. The universe didn’t owe him prestige just for being a maladjusted genius. His brilliance didn’t make him a just arbiter of life and death. The message of the final episode is that Walt was entitled to everything he wanted after all. The arc of Vince Gilligan’s deeply moral universe bends towards giving the angry nerd everything he wants.

The central question of Breaking Bad is why Walt cooked. Was he trying to provide for his family, or was it all just a particularly deadly species of midlife crisis? Walt answers that question definitively: He did it for himself. Yet, the writers undercut their own moral argument by letting Walt go out as a big shot provider.

I’m not arguing that art should always promote ethical behavior. If Breaking Bad had simply set out to tell a ripping good meth-cooking adventure, I would have been okay with that. But the show fell short of its own loftier ambitions as a parable about good and evil by giving Walt a mere slap on the wrist.

No doubt, the simple, cathartic gangster ending will help Breaking Bad merch sales. Be warned, if I see you in a Heisenberg hoodie, I’m walking the other way. Clearly, we have nothing to talk about.