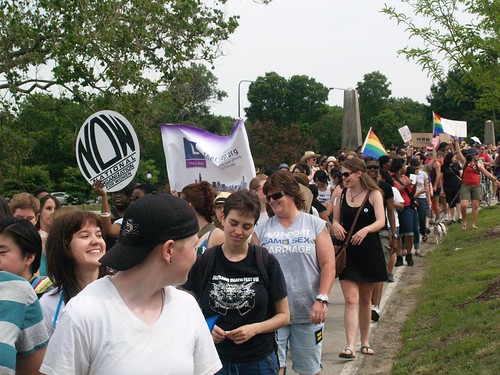 
CHICAGO—The Saturday before Pride Parade, hundreds of self-proclaimed dykes took to the streets in a decidedly more grassroots style event to highlight gender and transgender oppression within the LGBT community. This year's Chicago Dyke March, organized by the Chicago Dyke March Collective, brought together nearly 600 lesbian, transgender, gay and allied folks for an unpermitted march through Chicago's South Shore neighborhood on the city's south side.

The annual march is a precursor to the Pride Parade, and celebrates a lesbian community in Chicago that is without a Girlstown. Among the groups that participated in this year’s march were Gender JUST, The L Stop, Trans United, Join the Impact Chicago and Trikone Chicago.

Trans United Member Alexis Mijatovic, who is transitioning from male to female, said she wanted to highlight problems of trans-misogyny within not only the wider LGBT community, but also in the lesbian community of Chicago. She told In These Times that male to female transgender people can become excluded from lesbian spaces in the city. “People who go from female to male are more accepted, and that’s from a tradition of women born women, and kind of seeing biology as primary, over-writing self-identification or life experience,” she said. “It’s not about excluding people. It’s just about having an active discussion and an active debate.”

Transgender people suffer some of the worst discrimination in society, from the lack of security and protections in their workplaces to suffering hate crimes on the streets. If transgender people want to be recognized as their identifying opposite sex legally, many states require them to have surgery first. Mijatovic says this is not always accessible or desirable to many transgender people. “Transitioning is economically expensive to undergo, so of course dealing with a profit-based system, you find yourself shut out of a lot of things,” she said. “You find yourself shut out of healthcare a lot of times because health insurance companies treat [transitioning] as a pre-existing condition.”

It was Lisa Martinez’s first time out at the Chicago Dyke March. She is one of the co-founders of The L Stop, a Chicago-based website that works to represent and give a greater voice to the lesbian community of the city that often remains in the shadow of Boystown. She saw a need for the website since other gay publications really only “cater to the males in the LGBT community.”

Martinez thinks one reason why the lesbian community is not as cohesive as the gay community is that the bar scene in Chicago isn't as accessible to lesbians. The L Stop works to promote events that often are not bar-related in an effort to highlight lesbian spaces and culture within the city. Martinez said she wanted to attend the march to build better connections between lesbian organizations. “We have to build these relationships with each other to know that we’re there for each other,” she said.

Gender JUST Member Joshua McCool said there is still a lot of racial oppression within the queer community as well, and in society at large. The group’s Committee on Urban Resource Sustainability and Equity wants to reform many aspects of Boystown the group says are not inclusive of transgender and queer youth of color. McCool said the Center on Halsted (COH), which provides HIV/AIDS testing, is one such problem area for Boystown. “There’s been an issue with how [COH] has treated a lot of queer youth of color who come there for help,” he said.

His organization is also working on changing how Chicago Public Schools (CPS) treat queer students through the Safe and Affirming Schools Campaign. The group is working toward a meeting with CPS CEO Jean-Claude Brizard set for July 14 to discuss the problems with the grievance policy within CPS.

At Jackson Park the marchers enjoyed the food, poetry and music from queer and lesbian artists, and free HIV/AIDS testing.

The groups and individuals who gathered Saturday in the Chicago Dyke March are fighting for justice and more representation within the greater queer community in Chicago, celebrated at Sunday's larger Pride Parade. While many people had different issues to speak to when coming to the march, they all chanted in unison: “The gender system must be broken. I am not your effin token.”