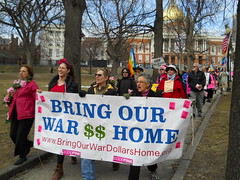 Update: On Monday, the U.S. Conference of Mayors passed a resolution at its annual meeting in Baltimore reading: "[The conference] calls on the U.S. Congress to bring these war dollars home to meet vital human needs, promote job creation, rebuild our infrastructure, aid municipal and state governments, and develop a new economy based upon renewable, sustainable energy." This anti-war resolution was the first of its kind since 1971, when the conference urged an end to U.S. involvement in Vietnam.

As peace activists and progressives nervously await President Obama's announcement of how many troops he intends to withdraw from Afghanistan next month, there is a growing grassroots anti-war movement in several cities across the United States that shows no signs of slowing down.

Though most efforts to pressure Congress to end the wars in Iraq and Afghanistan, accelerate troops withdrawals, or cut back on military spending have fallen disappointingly short, the Bring Our War Dollars Home campaign represents a fresh and promising movement that can energize communities to help shift the national discourse on military spending and leverage elected officials on the federal level.

The campaign, endorsed by CODEPINK and organized by a host of groups across the country, aims to engage local communities in anti-war activism, publicize the enormous costs of war on communities, and articulate the need to redirect war funding toward public education, job creation and other social programs.

The movement is reaching a critical juncture ahead of the 2011 U.S. Conference of Mayors from June 17-21 in Baltimore, as it seeks to recruit more mayors in attendance to co-sponsor a resolution introduced by Eugene Mayor Kitty Piercy that calls on the “U.S. Congress to bring these war dollars home to meet vital human needs, promote job creation, rebuild our infrastructure, aid municipal and state governments, and develop a new economy based upon renewable, sustainable energy.”

Some of the more notable co-sponsors of the resolution so far include Antonio Villaraigosa of Los Angeles, Stephanie Rawlings-Blake of Baltimore, Paul Soglin of Madison and R.T. Rybak of Minneapolis.

In Hartford, Connecticut, a particularly strong and dynamic movement has emerged that could serve as a valuable model for community anti-war activism in cities nationwide. The movement is inspired by the CODEPINK campaign, but it has now taken on a life of its own. Thanks to the work and pressure of local actors and organizations, the Hartford City Council passed a sweeping resolution on March 29 that condemned the effects of military spending and the costs of the wars in Iraq and Afghanistan.

“We put forward our own resolution, which was considerably more radical than the one[s] that passed in Maine and Massachusetts, that talked about defending unions from concessions and cuts, and that actually called on the residents of Hartford to go out to the anti-war march [in Manhattan on April 9] and actively support it,” campaign organizer and public school teacher Chris Hutchinson explained. “All of it is very exciting in terms of putting forward an anti-war agenda.”

On Thursday, Hutchinson and other activists convinced Mayor Pedro Segarra to lend his support to a Bring Our War Dollars Home resolution ahead of the mayoral conference that begins today—the letter presented to Segarra was endorsed by a host of community groups and leaders including Hartford’s State Representative Matt Ritter and a local Catholic Worker chapter.

The campaign is now directing its energy toward getting a citywide referendum on the ballot in November. In order for that happen, activists are now collecting signatures to present to Hartford City Council members who can initiate a referendum by introducing and then voting in favor of an ordinance.

The referendum would read: "We, the citizens of Hartford, Connecticut, call upon the US government and President Obama to end the wars and occupations in Iraq and Afghanistan and bring our war dollars home now. Instead of the billions of dollars for war and death, spend the money for our citizens' true needs—jobs, education, healthcare, and housing for all."

So while the Bring Our War Dollars campaign began in smaller communities in Maine and Massachusetts, the movement in Hartford has demonstrated that it has the potential to resonate in urban areas, where the cost of sustained war and foreign occupation hits hardest. In the capital of one of the nation’s wealthiest states—where the poverty rate is more than double the national average at 31.9 percent and unemployment sits at a staggering level, especially for the city’s ethnic minorities—it’s hard to imagine people who would disagree with the campaign’s objectives.

And for a peace movement that’s been deflated, demobilized and increasingly marginalized since Obama took office, this campaign shows that there just may be some signs of life in the movement that brought hundreds of thousands of people out to the streets in early 2003. It's unclear whether this campaign will actually be able to meaningfully alter current policy, but at this point, there’s really nothing to lose. If anything, it reveals the massive disconnect between the priorities of communities and those of the defense establishment.

"Just going out and getting signatures, nearly everyone signs,” Hutchinson said. “The community is with us on this.”