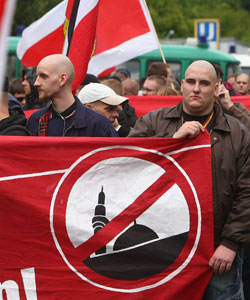 Supporters of the NPD march with a sign demanding an end to the construction of mosques in Germany in the Berlin district of Neukoelln in August 2008. (Photo: Sean Gallup/Getty Images)

In the wake of last month’s revelation that a neo-Nazi terrorist cell was responsible for more than a decade of hate-related violence, Germany may move to outlaw one of Europe’s most extreme right-wing parties.

Known as the National Democratic Party (NPD), the group is a hot topic among Germany’s political elite these days, as representatives across the political spectrum call for a ban on what they see as an organizational conduit for neo-Nazi ideology. NPD’s popularity is relegated to poorer regions of former East Germany, with electoral success in only two Landtags (state parliaments).

Reiner Haseloff—a member of Angela Merkel’s ruling, center-right CDU—stated that “The NPD-ban needs to happen now," adding that “a confident, watchful democracy must deal with this threat."

A previous proposal to outlaw the NPD was rejected in 2003 by Germany's Federal Constitutional Court following the disclosure that police and intelligence informers had infiltrated the party’s highest ranks.

The debate’s resurgence is the result of events last month in Zwickau—a small town located near the Czech border—where police successfully traced 13 years of unresolved criminal activity to a Nazi-inspired group known as the National Socialist Underground (NSU).

Authorities have so far confirmed three members of the terrorist cell: Uwe Mundlos, Uwe Böhnhardt and Beate Zschäpe. Recent findings, however, indicate that up to 20 people may have been involved.

Police caught onto the group on November 4, when Mundlos and Böhnhardt were found dead in a recreational vehicle outside the town of Eisenach, about 110 miles west of Zwickau. The two allegedly died in a suicide pact following a botched robbery.

The group is responsible for the infamous döner murders—a spate of racially-driven attacks that claimed the lives of eight ethnic Turks, one Greek national and a policewoman. Additionally, the NSU is responsible for at least 14 bank robberies and two nail bombs.

Following the discovery, Chancellor Angela Merkel declared that the group and its activities indicate “structures that we never imagined.” Hans-Peter Friedrich, the Interior Minister, has called for a national database of suspected neo-Nazis.

The national discussion on Nazism has thrown a spotlight on the NPD, who has been accused of propagating revisionist history and antisemitic rhetoric. Additionally, at least one party member is accused of directly aiding the NSU.

On November 29, authorities arrested Ralf Wohlleben in the town of Jena. Wohllenben—a former high-ranking official within the NPD—allegedly provided arms and ammunition to members of the NSU in either 2001 or 2002. Furthermore, Wohllenben and all three members from the NSU had belonged to the “Fellowship Jena,” a neo-Nazi group active in the mid-90s.

Ole Schröder, a member of Merkel’s Christian Democrats, remarked that "investigators must now analyze whether Wohlleben was involved in the Zwickau terror cell intrigues on order from the NPD, or with the party's knowledge."

If the NPD is further implicated in NSU’s terrorist activities, the fallout could spell trouble far worse than mere dissolution. German police have unearthed a hitlist authored by the NSU containing 88 names. The list includes many politicians, such as Green MP Jerzy Montag and CDU MP Hans-Peter Uhl.

If the Bundestag chooses to move forward with an attempt to ban the party—a measure with widespread support among both the ruling coalition and the opposition—the German public would likely go along with it.

A recent poll by the broadcaster ARD found that 81 percent of Germans felt that “neo-Nazis and right-wing extremists were handled too leniently.” Over half stated that German officials were negligent in over-looking the activities of the Zwickau-based NSU.

Nonetheless, there are opponents to the ban. Hans-Peter Uhl, who was on the terrorists’ hitlist, believes that German society has a better alternative for stomping out neo-Nazism: “There is no better sign of democracy than for the electorate to vote against the NPD at elections. That's the most noble way.”