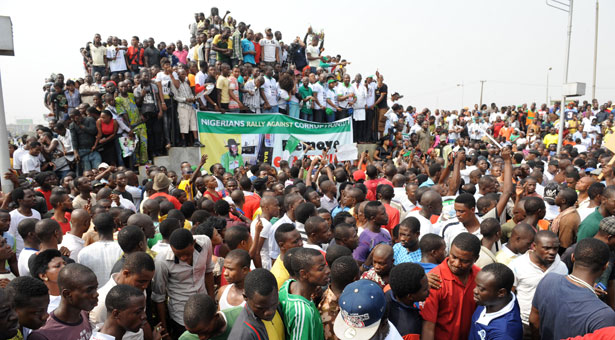 Crowd holds a banner that reads "Nigerians Rally Against Corruption" on January 9, 2012 during a protest in Lagos against the more than doubling of petrol prices after the government eliminated fuel subsidies
(Pius Utomi Ekpei/AFP/Getty Images)

Nationwide protests in Nigeria over fuel subsidies entered a third day today, bringing the most populous African country to an almost complete standstill.  Many businesses, schools and gas stations closed as tens of thousand of Nigerians took to the streets in demonstrations dubbed "Occupy Nigeria."

The government abruptly ended its fuel subsidy program on January 1, and during the past week the price of gasoline doubled from about $1.70 per gallon to about $3.50 per gallon, according to The New York Times. In a country where 70.8 percent of the population lives on less than two dollars a day, the prices will have a large impact.

While there were reports of singing, dancing, and a carnival-like atmosphere, there have been deadly clashes with police. On Monday, two people were shot and killed in the northern state of Kano according to sources.  On Tuesday police fired on protestors, injuring 13, CNN reports. A roadblock of burning tires was erected on the main bridge connecting two islands to the Lagos’ mainland, and a curfew was imposed in the northern capital of Zamfara, according to the Mail & Guardian.

The Nigerian Labor Congress and Trades Union Congress have urged President Goodluck Jonathan to reinstate the subsidies, which have been in place for years. Some analysts say the removal could boost the nation’s economy, but protesters gathered in Abuja yesterday demanded, "Remove corruption, not subsidy."

The subsidies are estimated to cost $7 billion a year, but the Nigerian government has been unsuccessful for nearly two decades in its attempts to cancel it because of public outcry.  Though Nigeria is an oil-rich country, it lacks the infrastructure to process crude oil and still imports almost all of its gasoline. Almost all of the nation’s refineries are broken.

An investigation by the Nigerian government revealed that the subsidy mostly benefits wealthy owners of Nigerian oil-and-gas firms, like Oando, the largest private firm, which profited $1.4 billion between January and August 2011. Though the subsidy cost gets passed on to the consumers, middlemen in the import process absorb the savings by siphoning off the imported fuel and selling it in other countries at three times the Nigerian price.

Though the Occupy Nigeria protests were triggered by the removal of the fuel subsidies, participants say they are bringing other, longstanding grievances to the surface.

The protests encompass more than the price of fuel. In the spirit of Occupy movements around the world, Nigerians are insisting a share in the benefits of their oil-rich country, which have thus far gone to the elite. Protesters carried signs which read, “One day the poor will have nothing to eat but the rich,” and “Remove corruption, not subsidies.” Sean Kuti, son of the late musician and activist Fela Kuti, has spoken at the protests and on television in support. Kuti has also been critical of the elites and the government.

The International Monetary Fund recently lauded the president in December for taking steps towards changing the economy. "Who praised the president? The International Motherfuckers?" Kuti said in a Guardian article. "Look, the IMF and international policy cannot work in Africa because they do not take the common man into consideration. Now that you can only afford half the fuel you could before, where do you think the rest of the fuel will go? It's going to the west, where the price of fuel has been skyrocketing."