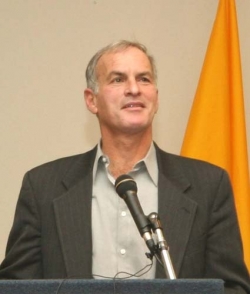 Norman Finkelstein’s lecture at DePaul's Lincoln Park campus last week marked the first time that the political science professor has returned to the Chicago university since his controversial departure in 2007. The now-infamous decision by DePaul to deny Finkelstein tenure resulted in part from conservative academics’ campaign to paint Finkelstein, whose research was critical of Israel, as a Holocaust denier.

Speaking to a crowded lecture hall on January 17, Finkelstein discussed the experience and for the first time revealed some of the details of his settlement with DePaul.

"DePaul's plot to deny me tenure had nothing to do with my faults,” Finkelstein said. "In fact, and ironically, it viciously attacked me and destroyed my career because of my virtues. Which, although few in number, they still found threatening."

Full disclosure: I was a student of Finkelstein's prior to his departure from DePaul.

Finkelstein taught political science at DePaul University, the largest Catholic University in the U.S., for six years. He is the author of several books and has lectured around the world about the Israeli-Palestinian conflict. His parents survived the Nazi Holocaust, and he frequently criticizes what he sees as attempts to use the Holocaust as cover for Israel's illegal occupation of the West Bank and Gaza strip.

When he was denied tenure in 2007, he consistently had among the highest student evaluations of any teacher in the political science department at DePaul. Many of his students were outraged, and camped out in the office of the President of DePaul for three days and two nights in protest. Many have commented that Finkelstein's problem was that he touched the third rail of American politics—the Israeli-Palestinian conflict—before he had obtained the protection of tenure.

When a university denies tenure to a professor, the professor is usually allowed to finish one more year at the school in order to seek other employment. Finkelstein's tenure-track contract actually had another year on it, but DePaul refused to allow Finkelstein to teach that year. As a result, Finkelstein reached a settlement with the school, much of which is still confidential--but part of which was that he would be barred from campus.

Finkelstein returned to campus, however, after asserting that DePaul had violated the terms of the settlement, which he said he had fully documented. "I have 500 pages of correspondence. I feel completely confident that if I am challenged on any word spoken today, I can carry the day in the court of public opinion."

Asked why he was "reopening the wound," Finkelstein replied, "I did not reopen the wound. The wound never healed, and it can not heal. I can not move on. DePaul destroyed my professional calling. There's no where else to move."

Citing the precedent that had been recently set where DePaul president Fr. Holtschneider reversed a denial of tenure for chemistry professor, Quinetta Shelby, Finkelstein made a proposal to DePaul's administration and board of directors: "if you acknowledge your wrongdoing in my case, if you apologize for the wrongdoing, and grant me the tenure that I earned, and that I deserve, then I would consider the matter closed." So far, the administration has not taken Finkelstein up on this offer.

Finkelstein went on to assert that the events in 2007 had constituted a “plot” to destroy his professional career, saying that many of those who participated in it had gone on to receive promotions.

While he did not name the attackers, it was clear to this writer and those assembled from the DePaul community who he was talking about.

Finkelstein said that "after the settlement agreement had been signed and in flagrant breach of it," a DePaul administrator told an outside professor that Finkelstein had been denied tenure because of the “secret information.”

One might ask, what was this "secret information" that tainted the tenure process?

Another DePaul administrator accused Finkelstein of violent assault and of promoting "bestiality, incest and rape" in his classes, which could have been referring to a lecture on John Stuart Mill's book, On Liberty, taken horribly out of context. Finkelstein described how DePaul's provost dropped all the charges when he threatened to go public with this "filthy frame-up."

Then there are the rumors and claims associated with Alan Dershowitz. Finkelstein had angered the Harvard law professor by repeatedly challenging Dershowitz's scholarship on the Israeli-Palestinian conflict.

Dershowitz, a supporter of legalizing torture and apologist for Israel's worst war crimes in the occupied territories, launched an effort to smear Finkelstein's reputation.

According to Finkelstein, the chair of the political science department, Pat Callahan, entered into a correspondence with Alan Dershowitz and "conspired with him to prevent me from getting tenure." Dershowitz claimed that Finkelstein was a Holocaust minimizer at best, a Holocaust denier at worst. This charge was issued despite the fact that Finkelstein's parents had survived the Holocaust and Finkelstein had dedicated many of his books to their memory.

DePaul's law school launched their own investigation of Finkelstein, with information from Dershowitz that mischaracterized many of Finkelstein's positions and took his statements out of context. "Two DePaul law professors told the law school faculty that I was a Holocaust denier. That I was a part of the Iranian-Venezualian worldwide conspiracy to deny the Holocaust," said Finkelstein.

Despite this heavy-handed intervention, Dershowtiz claimed at the time that he had only intervened in DePaul's tenure process when he was asked to by Callahan.

Later, however, Fr. Holtschnieder told students supporting Finkelstein that in fact Dershowitz had repeatedly sent letters and attempted to meet with him--attempts that, according to Holtschnieder, were turned down.

Finkelstein invited the chief figures involved in his tenure case to the lecture, and offered them the full right to reply. None of them attended or spoke.

This episode with Finkelstein has also highlighted broader problems with DePaul’s tenure system as it impacts academic freedom. DePaul's denial of tenure of a range of professors who didn't fit a particular mold stands as a bleak reminder of who actually controls high education today. In one example, the school denied tenure to Melissa Bradshaw, who spearheaded the foundation of the school's LGBTQ studies program, the first of its kind at any Catholic university.

The school also has an established pattern of denying tenure to faculty of color. According to attorney Lynne Bernabei, "Over a 20 year period prior to 2009-2010, minority applicants for tenure at DePaul were twice as likely as white applicants to be denied."

Despite having his teaching career ruined, Finkelstein is pushing ahead with plans to publish three books this year, including one about Ghandi and his lessons for the struggles to end the Israeli occupation. He has even been invited to speak to the oldest Jewish society at Yale, whose last speaker was former Israeli Prime Minister Ehud Barak.

On behalf of some of your former students, everything you said is horrific, they have robbed you of something. But what they can't rob you of is the impact that you had on all of us, who had the honor and privilege of being your students. There are very few big moments of my life where I don't think of something you said in class, or remember the things you taught me. The few classes that I took with you have had a bigger impact on me that probably most things in my life, and that's something that DePaul's administration can never take from any of us, or you.