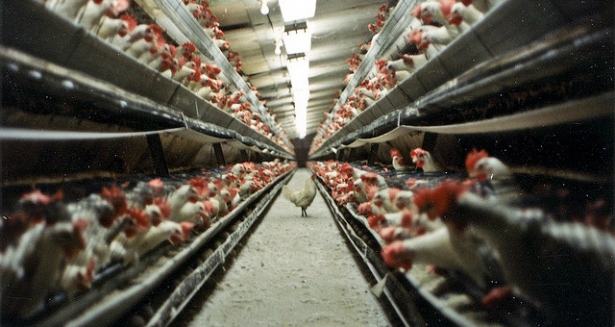 A lone hen escapes from her battery cage.
(Photo courtesy of Farm Sanctuary)

Earlier this week, a group of lawmakers introduced a bill in the House that would seek to ameliorate the living conditions of egg-laying hens.

H.R. 3798, the Egg Products Inspection Act Amendments of 2012, is the result of a joint effort of the Humane Society of the United States (HSUS) and the United Egg Producers (UEP).

Wayne Pacelle, president and CEO of HSUS, said in a press release that the resolution is “historic and unprecedented,” reflecting a degree of cooperation between animal rights activists and industry representatives hitherto unseen.

Chad Gregory, Senior Vice President of UEP, noted that the changes will require $4 billion in sacrifices, but that the move is necessary and that the industry is a willing partner: “This has been an incredibly grueling process, but we’re here today excited to recognize and celebrate this monumental achievement.”

For years, HSUS has lobbied for state-level regulation of industrial egg production. A complex web of varying state regulations—reflecting radically different conceptions of animal treatment and welfare—was very costly for the UEP, which represents 88 percent of U.S. egg production. Looking to standardize regulation and to appease its critics, UEP began working with HSUS in July 2011.

The primary purpose of the legislation is to phase out the use of battery cages—tiny confines that currently house over 280 million hens in the U.S.

These cages can be as small as a piece of printer paper, leaving no room for a hen to extend her wings, stand up or stretch. Stacked in tiers, battery cages prohibit hens from engaging in their natural behavior. As a result, hens can become crazed, pecking violently at neighboring birds and themselves.

Curing the symptom rather than addressing the cause, many egg producers cut off hens’ beaks to prevent them from mauling others, instead of allowing them greater space to roam.

The legislation would affect a number of changes on the industry, should it pass Congress:

• It would replace battery cages with “enhanced colony housing.” These new environs would give birds double the space of average battery cages.

• After a phase-in period of larger housing facilities, the legislation would mandate environmental enhancements—such as perches and scratch pads—that would provide outlets for hens’ instinctive behavior.

• The resolution would also require clearly detailed labeling on all eggs nationwide that describe the living conditions of the animals. These labels would include: “eggs from caged hens,” “eggs from hens in enhanced cages,” “eggs from cage-free hens” and “eggs from free range hens.”

In addition, the resolution would rectify several other cruel industry practices, including forced molting—the technique of depriving hens water and feed in order to stimulate quicker egg-laying cycles.

The legislation would provide great relief to many birds currently held in inhumane conditions across the United States.

Many other deplorable practices, however, would remain intact.

Egg-laying hens are genetically manipulated to produce eggs at a higher rate. While this accelerates egg production, it also causes hens’ bodies to degenerate faster. Hens usually remain in egg production for only a year, after which they are killed at a young age for use in animal feed or low-quality chicken meat products. Even if their life were to become slightly more comfortable with double the (very small) space they currently have, they would still likely continue to die very prematurely.

As a consequence of the U.S. market’s preference for broiler-meat, the male chicks of layers have no economic benefit for agribusiness. Male chicks are thus “destroyed” shortly after birth. This is done through numerous ways. They are sometimes sucked through air tubes and thrown against an electric pad, electrocuting them. Others are sent on a conveyor belt through what is known as a macerator (think: wood chipper).

Reforming the industrial food production system is an important way of improving animals’ lives, but basic reforms shouldn’t obscure other cruelties that are inherent to the system.