Catholics (Including Those He Went to School With) Ambivalent About Santorum 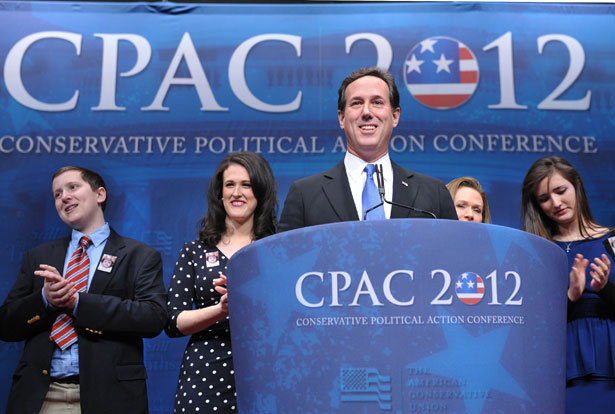 Do you value the independent journalism you find at  In These Times? Please donate today to help keep all of our online content free and accessible.

In recent days, national polls have shown Rick Santorum leading Mitt Romney for the first time in the GOP race. Santorum is 15 points ahead in Romney's home state of Michigan, and enjoys almost twice as much support as Romney among conservatives, Tea Party supporters and white evangelicals.

Santorum has been playing to the evangelical base of late, picking up the endorsement of evangelical leaders in January. But signs of support among the Catholic community from which he hails are so far decidedly more mixed.

In a Huffington Post article entitled, “Is Rick Santorum an Evangelical or a Catholic?” David Brody, the chief political correspondent for Pat Robertson's Christian Broadcasting Network, is quoted as insisting that “Rick Santorum is an evangelical at heart.”

Many of his positions are also more in line with those of evangelicals. As a House member and Senator, Santorum built a career on social conservative issues while citing his Catholic faith.  He opposed LGBTQ rights, teaching evolution, contraception and a woman's right to choose. But he has recently been asked to account for some key areas where his positions diverge from those of the Church—including health care and immigration reform.

Some clues to Santorum’s political apostasy come from his roots in Illinois, where he graduated from Carmel Catholic High School. Last weekend, the school held its annual fundraiser, where far-flung alumni gathered and criticism of Santorum abounded.

Many Catholics who attended Carmel Catholic aren't connecting with Santorum’s brand of socially conservative Catholicism.  Over 300 alumni and students of his own high school have joined a facebook page "Carmel Catholic Alumni Against Rick Santorum."  John Beltramo, an alumni from Santorum's class of 1976 said, "I find him to be an embarrassment to our graduating class and to the school as a whole.  Catholic faith notwithstanding, there's no room for this brand of bigotry and exclusion in public service."

Perhaps Santorum's disconnect has to do with his few ties to the Catholic community he came from.  His father worked for the VA and moved the family around often (as a result, Santorum attended Carmel Catholic for only his senior year).  Few alumni even remembered him.  He wasn't active in clubs or sports.

Martha Ann Cahill Weaver, class of 1967, is active with her local chapter of PFLAG (Parents, Families, and Friends of Lesbians and Gays) "I'm embarrassed that Santorum attended Carmel. . . I am deeply saddened that he could so easily write off an entire group of human beings."

Santorum cites his Catholic faith as guiding his social conservatism, yet there is no requirement for one to be opposed to LGBTQ rights in Catholicism.  The United States Conference of Catholic Bishops and the Pope have issued statements condemning the LGBTQ movement, but the Pope has never given an official declaration of infalliability regarding LGBTQ issues or abortion.  The teachings of bishops on these issues are not at the level of Church dogma, which you must believe in order to be considered Catholic by the Church.

Indeed, as has been widely noted, most American Catholics have far more liberal views on social issues than do the bishops.  In addition to the widely-cited finding that 98% of sexually active Catholic women use birth control at some point in their lives, the latest Public Religion Research Institute poll shows that a majority of Catholics believe employers should be required to provide for health insurance that covers contraception. (Though this poll was taken before Obama's proposed compromise.)

A similar poll from the PRRI showed a high level of Catholic support for gay rights.   71% of Catholics support civil marriage equality and 56% do not consider same-sex relationships to be a sin.

Santorum has picked and chosen which statements of Catholic Bishops he agrees with.  While he agrees with their statements against gay rights, he diverges when it come to his support for the war in Iraq, immigrant and labor rights, and even evolution, something that the Pope has spoken in support of since the 1950's.  The current Pope, Benedict XVI called the debate between creationism and evolution science "absurd," as faith and science can coexist. Benedict explained that "there is much scientific proof in favor of evolution, which appears as a reality that we must see and which enriches our understanding of life and being as such.”

Jim Wilkins, a 1976 Carmel Catholic alumni (the same class as Santorum) said, "two key things I was taught at Carmel & Santa Maria were that you treat everyone fairly & equally and how you treat the most disadvantaged among us defines you as a person. Santorum fails on both points."