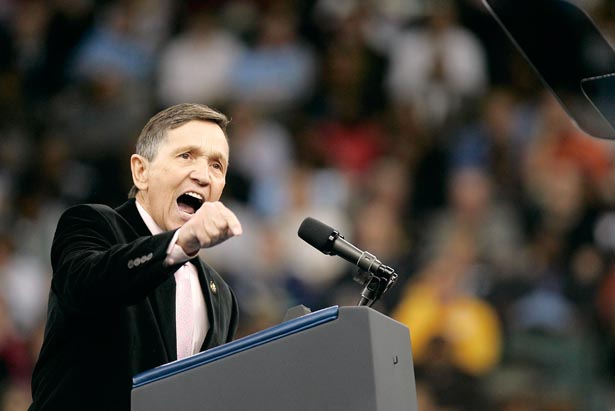 When Dennis Kucinich’s political career came to an abrupt end this week, the progressive movement lost one of its most vocal and visible advocates. Kucinich’s rise to that status illustrates a paradox that's worth reflecting on: U.S. Representatives hardly ever achieve national influence until they aspire to a higher office. For this reason, a replacement of Kucinich's stature and far-reaching influence may be difficult to come by.

Kucinich lost his primary battle to Democrat Marcy Kaptur on Tuesday, after new congressional boundaries drawn by Ohio’s GOP-controlled legislature eliminated his district. Though speculation continues that he may still run for a vacant congressional seat in Washington state, his campaign has declined to provide details on his future plans. Kucinich was first elected to the House in 1997.

What put Kucinich in the national spotlight was his bid for the 2004 Democratic presidential nomination. The critical issue during that campaign was the war in Iraq. Kucinich had voted against the Iraq War Resolution in the fall of 2002, which led to the invasion that George W. Bush initiated the following spring. Kerry had voted in favor of the Resolution, although in the fall of 2003, with his presidential campaign gearing up, he attempted to distance himself from the vote.

Kucinich never seriously threatened Kerry’s path to the nomination, but the presidential bid supplied him with a national platform, and his sustained criticisms of Kerry’s war vote—at a time Democrats were timid, at best, about criticizing the war in Iraq—made him a central and vital figure within the progressive movement.

It’s easy to assume that Kucinich was always the progressive stalwart that he has become. But early in his political career he was strongly pro-life, and didn’t declare himself pro-choice until his campaign for the 2004 nomination. He called the switch “a journey” and said that it resulted from discussions with women and engagement with a broader range of views. Critics said that it was political opportunism.

The evolution of his stance on abortion rights was ultimately a minor footnote in Kucinich’s career. It is his stance against George W. Bush’s war push for war in Iraq, and his strong defense of civil liberties, that Kucinich will be remembered for. And at a time when the parallels to 2002 are growing more ominous, it’s tempting to wonder who will be the next Dennis Kucinich.

Such speculation is probably futile: A decade ago, it wouldn’t have been obvious that the pro-life Kucinich would soon emerge as a progressive hero. But one possibility is Tammy Baldwin, the Representative in Wisconsin’s 2nd Congressional district, who has among the strongest progressive records in Congress on foreign affairs and civil liberties. She’s now running for the state’s vacant Senate seat, and because Wisconsin is a swing state, she’ll have a highly visible national platform through the summer and fall.

The particular set of circumstances Baldwin finds herself in could push her onto the national stage the same way that Kucinich entered it in 2004--and a clear, anti-war voice within the party is once again sorely needed. But that’s only speculation.  As the drumbeat for war with Iran grows louder all the time, it's unclear who, if anyone, will rise to the occasion the way Dennis Kucinich did the last time we reached this crossroads.