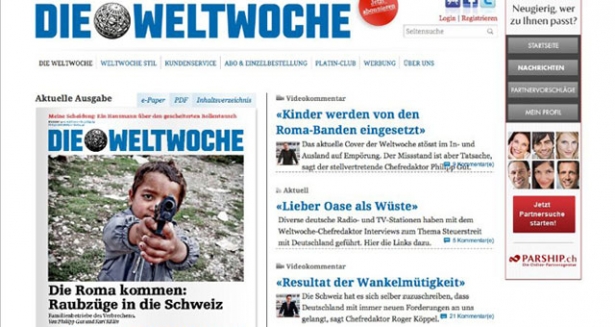 The cover photo of Die Weltwoche featured this photo of a Roma child.

Die Weltwoche, a German-language weekly based in Switzerland, is under fire for a recent cover article that critics have deemed inflammatory and racist.

The article’s accompanying image is provocative, heart-breaking . . . and completely misleading.

In the photograph, an ethnic Roma child, wearing a disinterested gaze, points a handgun at the camera. Within the context of the article—a piece that argues that Roma “come, steal and leave"—the image embodies a looming threat to Switzerland: an ethnic minority whose gun-wielding children endanger the fabric of Swiss society.

The picture, however, was taken over 700 miles away in the Balkans by Italian photographer Livio Manchini. It depicts Roma youth playing in a garbage dump in Kosovo. According to Mancini, he had no say in the magazine’s decision to use the photo, as Die Weltwoche purchased it through a third party agency.

In a statement to In These Times, the Open Society Foundation Roma Initiatives commented that Die Weltwoche’s manipulation of the image was “sinister,” and that “such biased reporting reinforces ignorance, indifference and ambivalence toward Roma citizens, [creating] a climate where prejudice can and does thrive.”

Numbering 7 to 9 million in Europe (35,000 in Switzerland), Roma live primarily in the Balkans and Eastern Europe, where prejudice against them is most virulent. In several nations, including Slovakia, Roma are sometimes segregated from ethnic majority students in school, or automatically placed in special education classes. In Hungary, Nationalist neo-Nazi groups roam the hinterlands and assault Roma communities with relative impunity. Ataka, Bulgaria’s far-right political party, has called for a reinstatement of the death penalty to explicitly target Roma criminals.

But Roma increasingly face discrimination and physical harassment in Western Europe as well. French president Nicolas Sarkozy expelled a series of long-established Roma camps from the country—a politically-motivated attempt to shore up support among right-wing extremists in advance of presidential elections. Sarkozy has also clearly stolen some talking points from the far-right National Front party, having recently decared that France's biggest problem is that "we have too many foreigners."

The photographer, Livio Mancini, published a blog post decrying the incident. He provides the actual context for the image, remarking that he took the photo of Kosovar children “living in a slum built on a garbage dump” within the “backdrop of war:”

These were kids ... who were playing around, excited to have a foreigner take their photo. I saw [Die Weltwoche] using my photo to incite and fear and hatred of the Roma. They were showing a completely different picture. That was not what I had shot—not what I had seen. I saw a kid having fun with one of the few playthings that those children had.

Die Weltwoche, of course, is no stranger to sweeping generalizations. Its editor is Roger Köppel, the most prominent polemicist for the far-right SVP/UDC (the party that spearheaded Switzerland’s ban on minarets, and that also released an election ad in 2007 depicting several white Swiss sheep kicking out a black foreigner above the slogan, “For More Security”).  In an editorial that meditated on why women were so left-wing, Köppel commented that “women don't have to worry about making a living in a market economy as much as men do. Like the Left in general, women are adept at spending money others have earned first.”

Such a wellspring of poor, reductionist commentary would ideally have minimal reach. Unfortunately, Der Weltwoch has nearly 100,000 subscribers in the German-speaking world.

Activists are holding the publication accountable, however. Human Rights groups and journalistic societies have issued a handful of legal complaints in Austria, Germany and Switzerland. While legal action won’t eradicate anti-Roma sentiment, it nonetheless establishes a clear boundary beyond which race-baiters face public condemnation and scrutiny.