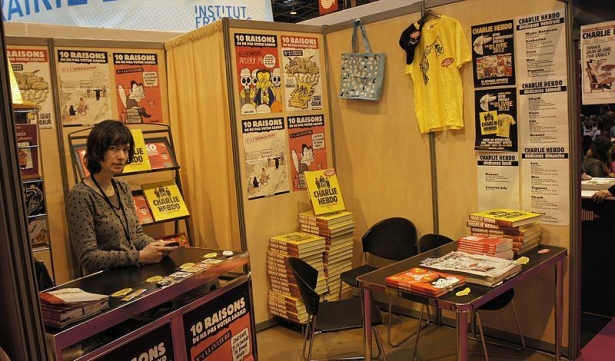 French satirical magazine Charlie Hebdo has published a series of cartoons mocking Mohammed, depicting the Muslim prophet naked in pornographic poses and being pushed in a wheelchair by an Orthodox Jew. The cartoons are running even as the US-made anti-Islam film Innocence of Muslims continues to provoke furor in the Muslim world, resulting in attacks on Western embassies and dozens of deaths.

The French government, which initially urged the magazine to refrain from publishing the cartoons, has reacted by increasing security measures and closing embassies and schools in 20 countries. French foreign minister Laurent Fabius rebuked the magazine in a radio interview, saying, "In France, there is a principle of freedom of expression, which should not be undermined. ... Is it really sensible or intelligent to pour oil on the fire?"

Many others have condemned the cartoons, including the leader of France's Jewish communities, Tunisia's Ennahda party and the Arab League, though all stressed the importance of using peaceful methods of protest. Pakistani hackers reportedly disabled the magazine's website today, which is still down at the time of this post's writing.

This is not the first time Charlie Hebdo has provoked controversy in the Muslim world. In 2006, the magazine reprinted the infamous Danish cartoons depicting Mohammed, causing it to be put on trial for violating anti-racism laws. More recently, in November 2011, it printed a spoof issue which listed Mohammed as a guest editor. The day before, its offices were firebombed (no one was hurt) and its website hacked for a day. The magazine's editor, Stéphane “Charb” Charbonnier, received death threats through various sources.

Six months after the bombing, Charbonnier conducted an interview with Cartoonists Rights Network International (CRNI). In the interview, Charbonnier claims that over the magazine's 20-year existence, it has been sued 14 times for its controversial and "blasphemous" style of humor. Remaining defiant in the face of criticism and violence from religious extremists, he declared, "If you are afraid of a draw [sic], your god is very very small." He went on to insist that Charlie Hebdo "has no choice" but to continue publishing, because "if we stop to publish [sic], we are dead." Four months later, Charbonnier maintains his position in the face of today's controversy, insisting that publishing the cartoons was simply an attempt "to comment (on) the news in a satirical way."

Regardless of how much the cartoons fuel the fire, it cannot be said that the Charlie Hebdo staff is hypocritical. To the New York Times , Charbonnier condemned the French government's decision to prohibit anti-Innocence of Muslims protests planned for Saturday, saying, "Why should they prohibit these people from expressing themselves? We have the right to express ourselves, they have they right to express themselves, too."