Why ‘a Binder Full of Women’ Is a Stack of Lies 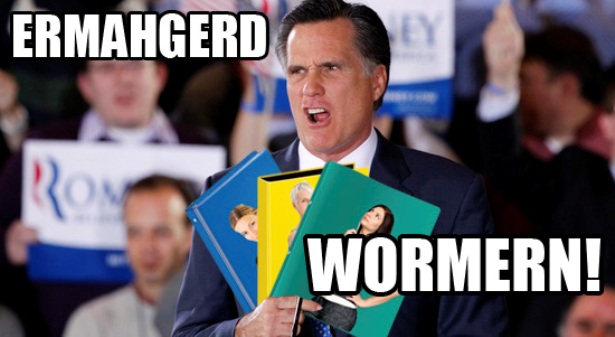 The memes are flowing in response to Mitt Romney's “binders full of women" comment at Tuesday night's Town Hall debate.

At last night’s debate, President Barack Obama and Governor Mitt Romney threw down like two huffy second graders fighting over a swing at recess. The candidates duked it out over their credentials as exploiters of natural resources, capitalists and terrorist-hunters.

And though Republicans stayed up past their bedtimes Tweet-plaining about moderator Candy Crowley and her Libya fact check, the rest of the country giggled over Romney’s other major debate gaffe: “binders full of women.”

The candidates started out discussing women in the context of the economy—innocent enough. In These Times writer Sady Doyle Tweeted of Romney’s response: “To be honest, I’m just impressed Romney mentioned women in poverty without breaking into maniacal laughter.”

But when a young woman asked a question about the gender pay gap, Romney couldn’t maintain his faux sensitivity a second longer. He launched into an anecdote about how he employed women in his cabinet (one that was  at best tangential to the topic of equal pay):

…I was serving as governor of my state, because I had the chance to pull together a cabinet and all the applicants seemed to be men.

And I—and I went to my staff, and I said, "How come all the people for these jobs are—are all men." They said, "Well, these are the people that have the qualifications." And I said, "Well, gosh, can't we—can't we find some—some women that are also qualified?"

And—and so we—we took a concerted effort to go out and find women who had backgrounds that could be qualified to become members of our cabinet.

I went to a number of women's groups and said, "Can you help us find folks," and they brought us whole binders full of women.

What Romney didn't mention was that during his time as head honcho of Bain Capital, there were no women partners in the firm. Today, only 4 of 49 partners are women. The candidate did mention that women need special accommodations "if" they work. Presumably, extra time to cook for their husbands, clean the house and raise children should be calculated into vacation allotments.

And just as the poorly chosen words rolled out of Romney’s mouth, social media users latched on to the phrase. #Bindersfullofwomen trended on Twitter while an industrious user created an @Romneys_Binder account; it currently boasts more than 14,000 followers. “Binders full of women” was the “third-fastest rising search on Google during the televised debate,” according to the Daily Beast. Then there’s the host of sidesplitting “binders full of women” memes (lots and lots of them) that cropped up on sites like Tumblr.

The blunder was doubly hilarious for conjuring up memories of HBO’s Big Love—about a fictional Mormon family that practices polygamy—and its references to “Joy Books.” The books (or binders, if you will) are encyclopedias of young (like 14-years-old-young) women eligible for marriage, which fundamentalist Mormon men can use to shop for extra wives. Apparently, the books are real.

Romney's running mate Paul Ryan went on CBS This Morning to defend the candidate's "binders of women" comment, arguing, "[Romney] has an exceptional record of hiring women in very prominent positions in his administration, and that’s the point he was making."

But alas, like so many of Romney’s “facts,” the story isn’t true. In a post for The Phoenix, blogger David S. Bernstein reported the study Romney supposed asked for was actually handed to him by MassGAP, a bipartisan group of women concerned with the low numbers of women in leadership positions within state government. MassGAP presented the binder of qualified women candidates to the winner of the gubernatorial election, who happened to be Romney.

Fourteen of Romney’s 33 senior-level cabinet appointments went to women, but as Bernstein notes, “those were almost all to head departments and agencies that he didn't care about—and in some cases, that he quite specifically wanted to not really do anything. None of the senior positions Romney cared about—budget, business development, etc.—went to women.”

Bernstein goes on to say the percent of women in senior-level cabinet appointments actually fell—from 30 percent before he took office—to 27.6 percent when he finished his term in 2006.

Romney’s binder blooper was just one of many anti-women remarks the candidate let slide during the debate. In a nod to the more radical elements of the GOP, Romney argued that single-parent families are to blame for gun violence. Feminists and women voters, already wary of the Romneys, reacted on social media. One wrote on her Twitter: “I'm a single mother and I just can't stop my 8 year-old from running around with his AK-47. I really need a husband.”

(In offending women, Romney also managed to subtly insult people of color. What’s been ignored is the inherent racism of Romney’s single-parent comment. The candidate implies that single-parent homes breed social problems, not vice versa. As 66 percent of African American children are born into single-parent homes (the highest rate among any U.S. ethnic group), Romney (and running-mate Ryan) had a simple message: Black people are violent.)