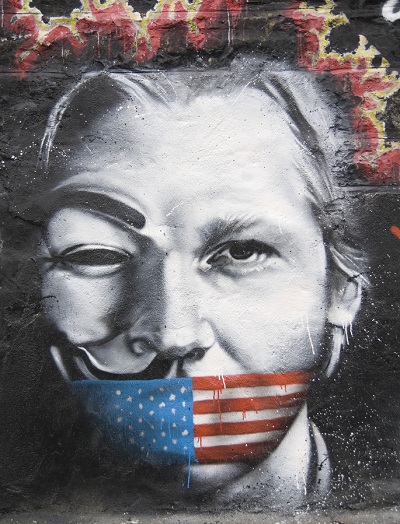 The latest addition to Wikileaks, the Detainee Policies, is likely to be a black eye for the Department of Defense.
(Thierry Ehrmann/ Flickr / Creative Commons)

WikiLeaks has a new project, and the Department of Defense is not going to like it. Yesterday, the whistleblower outfit started releasing over 100 classified documents pertaining to the evolution of the U.S.'s military detainee policies.

A press release stated the documents will be declassified in chronological order over the span of a month and will focus on Camp Bucca near Umm Qasr, Iraq, along with Abu Ghraib and Guantanamo Bay.

Among the documents released so far is a 2001 outline of protocol for "apprehending and returning escaped detainees" from U.S. Army detention facilities in Europe, as well as a 2004 guide to the rules of engagement for military personnel stationed at Camp Bucca.

The Camp Bucca document includes a caveat that soldiers are not to engage with civilians except when acting in self-defense. To judge by a previous WikiLeaks release, that doctrine was not followed--the video released in 2010, "Collateral Murder," famously captures U.S. military opening fire on civilians they believed to be insurgents in the suburb of New Baghdad, killing at least a dozen, including two Reuters staff, and injuring others. (U.S. Army Private Bradley Manning is still awaiting trial for allegedly helping Wikileaks get the video.)

WikiLeak's most recent dump has the potential to be nearly as damning, as the facilities mentioned have all been clouded in controversy. And at a moment when the international media is up in arms over two members of Pussy Riot being sent to some of Russia's harshest Soviet-era penal colonies, WikiLeaks promises to unearth documents that prove the U.S. is no innocent bystander when it comes to inhumane treatment of prisoners:

A number of what can only be described as ’policies of unaccountability’ will also be released. One such document is the 2005 document ’Policy on Assigning Detainee Internment Serial Numbers’. This document is concerned with discreetly ’disappearing’ detainees into the custody of other U.S. government agencies while keeping their names out of U.S. military central records–by systematically holding off from assigning a prisoner record number (ISN). Even references to this document are classified "SECRET//NOFORN." Detainees may be disposed of in this manner without leaving a significant paper trail.

The allegations are reminiscent of the torture manuals circulated in Latin America by the U.S.Army's School of the Americas personnel (now WHINSEC) during the Cold War.

The bulk of the documents to be released will be post-9/11: policies written in a similar era of national panic and in the name of safety. Some will concern the interrogation techniques practiced by the military that encourage psychological abuse, as well as the destruction of interrogation recordings, which, WikiLeaks claims, led to "abuse and impunity."

Keep tabs on the whistleblower investigation by following WikiLeaks on Twitter @wikileaks.