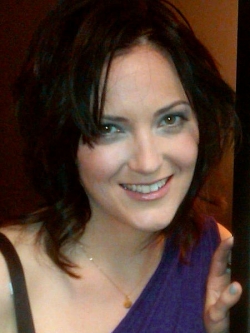 Comedian Jen Kirkman of Chelsea Lately and After Lately declared a "Twitter strike" today to protest Twitter sexism. After Tweeting "Maybe one day will go by on Twitter when people will ONLY comment on my comedy and go to Louis CK's page to talk about his body," Kirkman wrote a longer post on her Tumblr discussing Internet harassment of women comics, in which she announced her strike. Here's an excerpt from the post:

I’m on a Twitter strike. I am so sick of the way men on Twitter treat lady comics.  And my male friends always DM me or text me or email me or talk to me about how they hate it too but they never speak up.

... When I tweet about women’s rights - I am often shouted down by guys on the web and told to shut up and calm down and “I used to think you’re funny but you’re acting hysterical and like a bummer.” My guy friends in comedy rarely get as much backlash about their gender.  Maybe their comedy - (which is fair game, annoying that it is but….heckling is a fact of life online and that’s not what I’m speaking of.)

Here’s some examples of tweets I get EVERY DAY. (I didn’t cull these over a week. I got all these tweets TODAY within a half hour of each other.) See if the internet wouldn’t be less fun for you if you got this shit.

@aut0br0 .@JenKirkman you should stop being hot and start being funny. then maybe this is in the realm of possibility.

@BarberSquires @JenKirkman Not everyone gets spoken to the way they want in life.”

‏@shaun311 @JenKirkman YOU ARE WAY TOO SENSTIVE TO BE ON TWITTER. TRUE. HOW OLD ARE YOU 20?”

“@Will_Surb @JenKirkman srry im stupid i meant why rnt u in Playboy.”

Then I will come back to Twitter when I feel like I’m not the only voice constantly using her feed to interrupt her regularly scheduled funniness to try to teach young guys not to objectify women, tell them to shut up, correct their jokes, mansplain to them, etc.

I’m often told that women’s rights are not in any danger and I have the vote and we don’t need feminism anymore for “big issues” - (that’s a whole other issue) But the small issue of feeling part of the global web community is still a new frontier for women and we are starting at square one. I would love the support of my male friends in comedy - OUT LOUD and as part of their daily lives. The way we all do with gay rights and racism.

And to the people who say “Don’t go anywhere!” I will be back when I see male comedians speaking up. And specifically that group. It’s not up to my followers - it’s up to my peers. (and Retweeting doesn’t count)

And when I feel I am not the only voice out there, I’ll come back to Twitter. And trust me, I want to. I have things to promote.