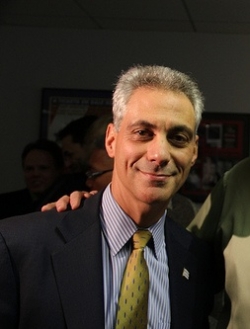 United Services' executive vice president, Paul Fosco, was convicted and imprisoned in 1987 for a "racketeering...scheme to swindle the Laborers Union through manipulations of lucrative benefit plans," the Chicago Tribune reports. Fosco's father, Angelo Fosco, and the infamous Anthony "Big Tuna" Accardo were also tried for their involvement, although both were ultimately acquitted. United Services' owner, Richard Simon, previously ran National Maintenance Facilities with partner William Daddano, Jr., whose father was a notorious enforcer and loan shark for the Chicago mob.

In a press conference last Tuesday, Emanuel insisted that the contract was awarded via a "competitive process," but skirted the issue of mob connections.

On November 29, the mayor's birthday, dozens of angry janitorial employees gathered outside his house in protest, lighting candles and singing Happy Birthday in English, Spanish and Polish. SEIU Local 1, which has spearheaded a campaign on behalf of O’Hare's custodial workers, will be sponsoring a City Hall demonstration at 3:30 pm on December 11 to protest "Rahm Emanuel’s War on Wages."