Emanuel to Justice Department in 2009: “Shut the F—k Up” About Gun Control 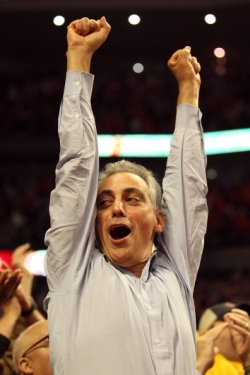 Rahm Emanuel had some choice words for Eric Holder on gun control in 2009.
(Photo by Jonathan Daniel/Getty Images)

According to Daniel Klaidman's book Kill or Capture: The War on Terror and the Soul of the Obama Presidency, in 2009, then-Chief of Staff Rahm Emanuel told Attorney General Eric Holder to "shut the f—k up" after Holder solicited White House support for an assault weapons ban. Emanuel was recently questioned by Norah O'Donnell about the incident on CBS This Morning. Asked O'Donnell:

The Assault Weapons Ban expired in 2004. You were President Obama’s Chief of Staff in 2009. According to the book Kill or Capture, you were furious with Attorney General Holder who held a press conference in February of 2009 saying that the Obama administration was going to reinstitute, push the assault weapons ban, and that you sent word to Justice that Holder needed to "shut the [fuck] up" on guns.

Emanuel did not deny the accusation, telling O'Donnell that in 2009, the White House had different priorities amid the crises of the Great Recession. He nonetheless insisted that the President's support for an assault weapons ban is unequivocal:

But O'Donnell seemed skeptical, noting that the pro-gun control Brady Campaign had given the Obama administration an "F," and fellow host Charlie Rose was positively incredulous, saying:

I don't understand why people, who did not have the political will to go forward, don't simply acknowledge it, and say, I've come around, as some have....the President did not do all that he could, and you know it, and...I suspect he knows it. But the more important thing is, is it now time to stand up to the NRA...?