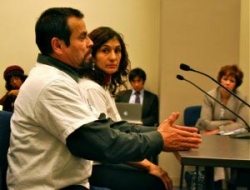 A car wash worker testifies before a Chicago City Council committee about having his wages stolen by an employer.
(Courtesy of Arise Chicago)

Chicago's City Council unanimously passed a wage theft law Thursday that labor activists hope will set a standard for other cities around the United States. Under the new law, companies convicted of wage theft—which includes unpaid overtime or hourly pay below the minimum wage—could have their business licenses revoked.

Before Thursday's vote, members of the labor group Arise Chicago and other workers and activists showed up in droves to committee hearings. Labor activists agreed to one concession: a provision of the bill specifying that businesses could lose their licenses only after "willful or egregious violations," a means of protecting companies who miscalculate workers' pay by accident.

According to a 2012 report from Progressive States Network, the ratio of federal Department of Labor enforcement agents to U.S. workers is a dismal one to every 141,000. With less enforcement and accountability, activists say, it's easier for companies to mistreat workers.

“In low-wage industries,” said [Arise Chicago's Adam] Kader, “it’s standard practice to be practicing wage theft.” Now, he said, “there’s another force that they have to reckon with, which is the threat of losing their license.” Advocates say Chicago is now the second, and the largest, U.S. city with such a law on the books. San Francisco was the first.