ROC-NY Steps Up to Stop Stop-and-Frisk 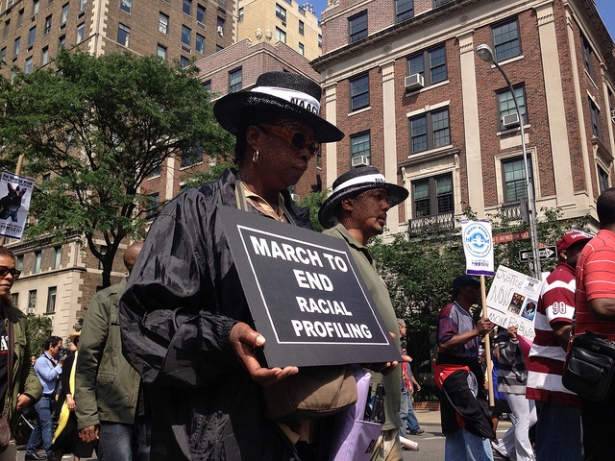 A demonstrator at a 2012 silent protest against stop and frisk racial profiling in New York City. Of those stopped for frisking by the NYPD, 87 percent are African American or Latino (longislandwins / Flickr / Creative Commons).

The verdict in the Trayvon Martin case was a reminder of the dangers posed by racism and abuses of power in our country’s criminal (in)justice system. I, too, received my own personal reminder of those dangers when, one night on my walk home from the subway a few weeks ago, I was arrested by a group of uniformed NYPD officers for exercising my right to film a young black man being stopped-and-frisked.

As someone who organizes restaurant workers in New York City, I am used to dealing with abuses of power—usually in the employment context where, for example, it is surprisingly common for restaurant employers to illegally steal workers’ wages.  At the Restaurant Opportunities Center of New York (ROC-NY), where I work, we help our members—who are New York City restaurant workers—organize to challenge those abuses.

Our members, overwhelmingly people of color, are all too familiar with abuses of power.  It seemed logical for us, therefore, to support Communities United for Police Reform (CPR)—a broad grassroots campaign aimed at curbing the NYPD’s racially skewed stop-and-frisk practices and other abuses. Of the 532,911 people stopped by the NYPD last year, 87 percent were black or Latino, and 89 percent were completely innocent of any wrongdoing. CPR has taken concrete steps to address these staggering numbers and was the driving force behind two important police accountability measures that recently passed the City Council with veto-proof majorities. (The City Council will still need to override Mayor Bloomberg's expected veto).

When ROC-NY officially endorsed the CPR campaign a little over a year ago, I was asked by a number of people what reforming the NYPD’s practices had to do with restaurant workers. It always seemed like an odd question to me. After all, as a membership-led organization, we support many efforts that affect our members, whether the issues are directly linked to the restaurant industry or not. Attend any one of our membership meetings and ask our members how many of them have been stopped-and-frisked or have children who have been, and the room will erupt in stories.

But even if none of our members had been stopped-and-frisked before, even if we had no black or Latino members, no Muslim members, no queer/transgender members, no members from any over-policed community, we would still support community-based efforts to create meaningful accountability and to curb abuses of power, whether by a private employer or by a police department that seems to think it answers to no one.

When I was arrested last month, I was doing what I believe I should have been doing: I was filming more than a dozen uniformed police officers swarming one 21-year-old black man who they said had urinated in public (the man denied it). I wasn’t in the officers’ way, and, in fact, when one officer asked me to take a step back, I did so willingly.  But I continued filming; it was my attempt to impose accountability on those police officers who, day in and day out, abuse their power by stopping, questioning and frisking multitudes of young black and Latino men. They do it because they can get away with it, usually without consequences.

At ROC-NY, we do what we can to create consequences for employers who abuse their power. We organize workers, we publicly expose "low road" restaurants through protests, lawsuits and media work, and we fight for government policy changes that mandate better, fairer employment practices.

Our approach to police reform is the same. It’s not enough to rely on the courts to impose accountability. The Trayvon Martin case was yet another reminder of that.  We must also pursue accountability through policy changes, through the media and, perhaps most importantly, on the streets. When communities come together to support each other on the streets, including through simple acts like filming police abuses, we have the power to create real consequences for those abuses. CPR embodies this multi-pronged approach to police reform, and ROC-NY is proud to support it.

The officers who cuffed me, bruised me, arrested me, dragged me to the precinct and locked me in a cell did so because they were threatened by the accountability that my camera represented. But if their goal was to intimidate me, they failed. My camera is in hand, ready to document the next abuse.

Rahul is a staff attorney with Palestine Legal. His work focuses on legislative issues, advocacy for activists whose rights are under attack, and building Palestine Legal's network of legal and other advocates.