The Day We Fought Back: Across the Nation, Privacy Advocates Protest NSA Surveillance 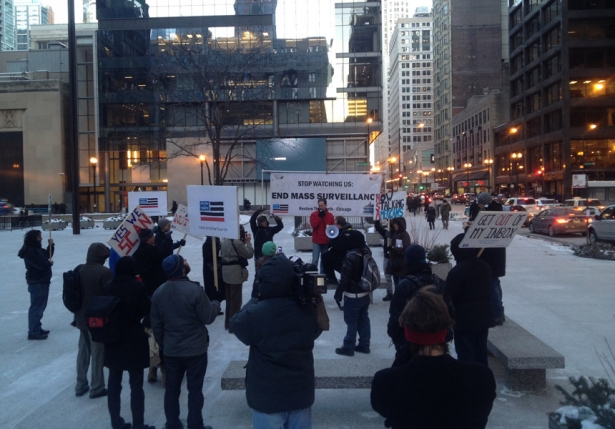 In an increasingly digital world, both government surveillance and the activism against it tend to happen primarily on the Internet. But Michael Paus thinks Americans still need to show up on the streets to take action. Paus is an organizer with Restore the Fourth Chicago, a chapter of a national non-partisan organization that works to end unconstitutional surveillance.

“We just want to show, on the streets of Chicago, an actual physical presence of what’s going on,” Paus told In These Times at a Tuesday evening rally and march against mass surveillance that drew dozens of people to the city’s Richard Daley Plaza. Paus believes that concerned individuals need to assert their right to assemble because the NSA’s metadata collection threatens the First Amendment, in addition to the Fourth Amendment. “We’re doing this without a permit. We’re just showing up here and we’re asserting those rights,” he said of Tuesday’s action.

Tuesday's march in Chicago took aim at NSA surveillance as part of an international day of action called The Day We Fight Back. Over the course of the day, 6,000 websites—including Reddit, Tumblr, Upworthy, and Mozilla—hosted a banner urging users to contact their legislators and demand that they limit, rather than legalize, the NSA’s surveillance. Events were scheduled in cities around the world, from Bogota, Colombia to Bluffdale, Utah.

Concerns about privacy and efforts to curtail government surveillance have grown since Edward Snowden first leaked classified documents to journalists in June of 2013. The documents revealed that the NSA has built a vast system of domestic surveillance through which the agency has been collecting phone records metadata and user data from popular sites like Facebook and Google. Building on those revelations, last month the New York Times and Pro Publica reported, based on documents leaked by Snowden, that the NSA also gathers personal data from smartphone applications.

Many of those who gathered in Chicago on Tuesday night were involved with Restore the Fourth Chicago, which organized the protest. Others showed up for another side to the international event—its commemoration of the life and work of developer and Internet activist Aaron Swartz, who committed suicide in January 2013. One man in attendance identified himself by his hacker name, “Blue,” and explained, “[Swartz] is a genius, so I think we should thank him for his contribution to computer technology and science. That’s why I came.”

As the group of protesters marched around the Loop waving handmade signs, they chanted, “The NSA has TMI!” and “Hey, hey, NSA! How many phones did you tap today?” People looked on from the ground floor of office buildings and commuters grabbed flyers or stood back to watch. Although three police cars and five officers followed the group for most of the march, the atmosphere remained positive and energetic. In an email to In These Times, Paus wrote, “The police were very respectful. We appreciate them accompanying us on our march to ensure our safety crossing the streets.”

The Day We Fight Back and associated events like the one in Chicago come as Congress considers the USA Freedom Act, a bill that activists say could curtail NSA surveillance, and the public outcry over government surveillance is gathering strength. Earlier this week, journalist Glenn Greenwald launched a site where he will continue releasing NSA documents. When the site went live on Monday, he published a new article with Jeremy Scahill exposing the use of metadata to direct drone strikes.

However, not everyone has come around to the urgency of these issues, said Alejandra Romo, a student at Holy Trinity High School who was waiting for a friend at Daley Plaza when the march began. “Right now people don’t know, they don’t care or they’re just too busy.” But according to Romo, that doesn’t mean they will stay silent forever. “The day it happens to them, you’re going to see them over here too.”