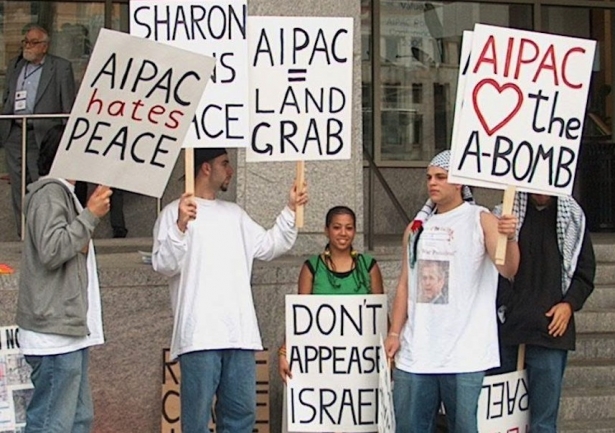 A poll released last week suggests that the power of the American Israel Public Affairs Committee (AIPAC), the American pro-Israel lobbying group, could be on the wane in Washington.

In the past, AIPAC has been so successful at garnering the support of politicians and passing pro-Israel legislation that in 1998 and 1999 Fortune Magazine named it the second-most-powerful group in Washington. AIPAC still runs an extensive lobbying operation; it spent $2.2 million on lobbying in 2013 and frequently sends lawmakers on expensive trips to Israel.

The global civic network Avaaz and Zogby Analytics conducted the poll of 165 DC insiders, including congressional staffers, leaders of NGOs and think tanks, leaders in the federal government, and members of the DC media. By a margin of 3 to 1, respondents thought AIPAC should have less influence over politics, rather than more. And 30 percent of those who had an opinion believed AIPAC's influence is indeed falling, compared to 47 percent who think it's staying the same and 23 percent who think it's rising.

From the outside, AIPACs annual conference had all the trappings of its bipartisan, kingmaker status in Washington: hundreds of members of Congress, rousing multimedia presentations and even a gospel choir. But after losing high profile battles … this poll shows a growing number of the Washington establishment see a damaging, partisan lobby on the decline.

The poll, which was conducted in late February, came on the heels of AIPAC’s failed attempts to drive foreign policy with Iran. On January 20, an interim agreement forged by Iran and six major powers, including the United States, came into effect. The agreement requires the U.S. and other nations to ease some sanctions, while Iran halts some of its nuclear activities. However, AIPAC leaders have claimed that diplomacy with Iran during the interim period is insufficient and pushed for greater sanctions, a move that many warn could escalate the situation into a war.

Despite President Obama and former Secretary of State Hilary Clinton’s warnings to Congress that additional sanctions would derail diplomacy, AIPAC threw its support behind the Nuclear Weapon Free Iran Act, a law that included harsh sanctions and a stipulation that the United States would provide military support to Israel if it acted in self-defense. The law eventually stalled in Congress, the first time since the Reagan-era that AIPAC lost a major battle with the White House.

Additional responses to Avaaz’s poll indicate that respondents see AIPAC and its involvement in foreign affairs negatively. Forty percent of respondents expressing an opinion felt that AIPAC's influence decreases the chance for a resolution in the Israel/Palestinian conflict, only 27 percent felt that AIPAC increases the chance of a resolution. Seventy-four percent of the respondents who expressed an opinion said they had seen members of Congress vote contrary to the U.S. national interest at least once as a result of AIPAC's influence.

Respondents also saw AIPAC as a partisan organization, with those viewing it as Republican-leaning outnumbering those seeing it as Democratic-leaning by more than 2 to 1.

Avaaz’s press release cites numerous other recent sources questioning AIPAC’s power, such as the New York Times and the Jerusalem Post. Moreover, Americans are speaking out against AIPAC and politicians’ willingness to dance to its tune. Following the discovery of a secret meeting between AIPAC and the newly elected mayor of New York City, Bill de Blasio, Jewish New Yorkers issued an open letter, asserting, “AIPAC does not speak for us.”