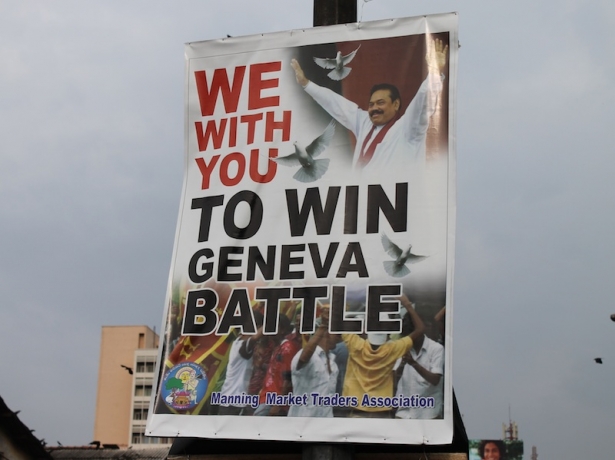 President Rajapaksa has denounced the imminent UN investigation as a product of "foreign elements," which could stir up a nationalistic sentiment among his substantial Sinhalese support.
Vikalpa/Groundviews/CPA / Flickr / Creative Commons.

But during the last few months, a third topic has popped up on Google News: the fate of a U.S.-sponsored resolution in the UN Human Rights Council (UNHRC) calling for "a comprehensive investigation into alleged serious violations of human rights and related crimes by both parties" during the final years of Sri Lanka's long civil war, which after more than 25 years, came to a decisive and brutal conclusion in 2009. In May of that year, following a deficit-fueled military build-up and 18 months of fighting, the government annihilated the armed rebels of the Liberation Tigers of Tamil Eelam. Since the 1980s, the Tigers had sought to carve out a separate state for the ethnic, religious and linguistic minority Tamils in northern Sri Lanka, largely through the use of violence.

On Thursday, despite intense lobbying by the Sri Lankan government against the resolution, the 47-member UNHRC approved the resolution, which calls for an international criminal probe. It's a major victory for both human rights advocates and for the UN itself, which is trying to repair its credibility on the Sri Lankan civil war after UN officials remained silent while abuses were occurring in 2009. (In December 2013, it passed a "rights up front" policy requiring UN officials to immediately reports human rights violations, partly as a result of its failure to clearly speak out in 2009.

But coming years after the war's end and the initial reports of atrocities, it's unlikely that soldiers, generals and the politicians who pushed them into action will be held accountable any time soon. Thursday's vote was a milestone, but it doesn't guarantee anyone will be brought to justice, And it certainly doesn't bring the war's two sides—the Sinhalese-dominated government, and the minority Tamil population who reside mostly in the island's north—any closer to reconciliation. Indeed, it may do the opposite.

The UN probe seeks to hold the Sri Lankan government and Tamil Tiger fighters accountable for violations of human rights at the end of the war. It also expresses concern for more recent alleged government abuses, which include the abductions and murders of journalists by armed men believed to have ties to the government, as well as torture. Sri Lanka's civil society—and its judiciary system—is under assault by an increasingly authoritarian president, Mahinda Rajapaksa, who has led the country since first being elected in 2005. His Sri Lanka Freedom Party (SLFP) has been dominant ever since.

The investigation into war crimes is a tall order: The government has already rejected the probe, denouncing it as "a serious breach of international law." It hasn't said it won't cooperate, but a spokesman for Rajapaksa called the resolution "politically motivated."

Underneath the combative rhetoric lies the continued popularity of Rajapaksa, who led the charge back into war. (I lived in Sri Lanka in 2002 and again in 2004 and 2005, during the relative peace of a ceasefire between the government and Tigers.) He's still cashing in politically on ending the war and is an old hand at wrapping himself in the Sri Lankan flag to stoke support among Sinhalese voters, who make up about 75-percent of the country's population.

Rajapaksa's reaction Thursday to the UNHRC approving the resolution, reported by the government-aligned Daily News, offered a typical mix of disdain, patriotism and scapegoating: "If one slings mud at the government with jealousy and hatred, the government will not sling mud in retaliation or in return on those who do so. ... Certain people furnish false details and data to foreign elements, including certain NGO's for petty gains." The newspaper added: "The President said that betraying one's motherland is similar to betraying one's own mother. Patriotic people never betray or harm their motherland."

Thus detailed reports of war crimes and human rights violations are cast aside as products of "foreign elements." The UN's own reports of war crimes on both sides become nothing but threats to the health of the "motherland." The government's message to Sri Lankans is, essentially, ignore the foreigners—they only wish to harm us.

Sri Lanka's own commission into war crimes, the "Lessons Learnt and Reconciliation Commission," delivered a lame report in 2011. The report acknowledges that government forces killed civilians but exonerates these same forces of intentionally targeting noncombatants. Rajapaksa's administration hasn't acted on the commission’s findings, which were rejected by groups like Human Rights Watch and Amnesty International.

"When a government is faced with credible allegations of violations of human rights and humanitarian law, it has an obligation to investigate, and the government hasn't done that," Steven Ratner, who was on a 2010 panel convened by the UN to investigate war crimes in Sri Lanka, told Al Jazeera. "There has been a culture of impunity in Sri Lanka for at least a generation. When you have a culture of impunity, the government thinks it can do all sorts of things, and individuals think they can do all sorts of things if they're not going to get prosecuted by the government."

Anyone who followed the war would have known its endgame would be brutal. The Tigers pioneered suicide-bombing techniques and were labeled a terrorist organization by the U.S. government in the late 1990s. Tigers leadership bunkered down in the island's northeast jungles, promising to fight to the death. They did.

But the final months of fighting were even more appalling than observers could have expected, with both sides committing atrocities. Human rights groups have documented countless examples of Sri Lankan military crimes, including summary executions, targeted bombing of civilians, rape and torture. The BBC's Channel 4 has published shocking videos of atrocities committed by soldiers in the final months of the war, with the most recent video appearing this month.

Sri Lanka's government has issued denial after denial, denouncing video footage as doctored or fabricated. This longstanding pattern of denial, alongside the country's complete dismissal of the UN process serves a political purpose for Rajapaksa and his allies: It allows them to solidify their Sinhalese base by playing up fears of foreign interlopers. With India’s Tamil Nadu state less than 50 miles from the island’s northern tip, historically many Sinhalese Buddhists have felt insecure despite their majoritarian status. (Sinhalese is only spoken in Sri Lanka, and the country’s dominant religion, Buddhism, is rare throughout the rest of South Asia.) Street protests staged by Buddhist monks aren't uncommon; lately hardline monks groups have even resorted to attacks on mosques.

It's quite possible that Thursday’s UN action will strengthen Rajapaksa's grip on power and exacerbate the Sinhalese nationalism he habitually exploits. The upcoming provincial elections will probably inflame simmering Sinhalese passions to the benefit of the SLFP.

Yet despite the dim chances for accountability and progress toward a lasting peace between the Sinhalese and Tamils through the devolution of political power, the UN war crimes investigation is a necessity. Not just to return a modicum of authority to an international body that so often fails to act decisively and speak clearly in the face of atrocities, but to send a simple message to Rajapaksa and his supporters: We will find the truth if you cannot.