Will the EU Elections Change Fate of Spanish Anti-Choice Bill? 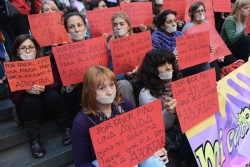 Women protesting against the conservative abortion bill with banners that read: "I need money to go to London to have an abortion." (Google Images / Creative Commons / Sergio Méndez)

After the 2014 European parliamentary elections, the two main parties in Spain—the ruling right-wing People’s Party (PP) and the left-wing Socialist Workers Party (PSOE)—lost 17 seats in the European Parliament. The results are a historic reality check for the country, as the two major parties received just over a combined 49 percent of all votes, the first time the two parties have garnered less than half of all votes in an EU election.

Still, the PP won the elections with 26 percent of the votes. And as the results show, much has changed since the PP won a historic absolute majority in the 2011 Spanish parliamentary elections. Support for the two-party system has waned among Spaniards, who have instead opted to support smaller independent parties in the EU elections.

The results have caught the ruling party by surprise, but for opponents of PP’s increasingly conservative policies, the elections could mean a major tide change in Spanish politics and change the fate of some of the ruling parties more draconian plans. Among the most conservative—and most roundly opposed—policies is a controversial draft abortion bill, first introduced in the Spanish parliament in December 2013.

The draft abortion bill has been highly criticised by Spanish citizens and health experts alike. If approved, it would become one of the most restrictive abortion laws in all of Europe.

In fact, according to a recent report from the Association of Accredited Clinics for the Interruption of Pregnancies (ACAI) in Spain, up to 95 percent of the legal abortions currently performed in the country would be illegal under the bill. The March study—which includes data from more than 6,000 women interviewees who have had abortions in an ACAI clinic over a four-month period, starting in October 2013—shows that if they had to make the decision to terminate a pregnancy under the proposed law, 62 percent of them would still have an abortion. Nearly 32 percent said they would travel abroad to obtain an abortion, while 30 percent reported they would turn to an illegal clinic for the procedure.

Under the current law, women are able to terminate their pregnancies without restrictions during the first 14 weeks. The  proposed law would make abortions illegal in all situations, with the exception of rape or when there is a serious mental or physical health risk to the mother. Additionally, the determination of whether a woman qualifies for a legal abortion would have to come from two different doctors; they cannot be employed by the facility that will perform the abortion. The added restrictions will only make the process of obtaining an abortion longer and stricter.

The current Spanish abortion law permits 16 and 17-year-olds to end their pregnancies without informing their parents or guardians if it will put the young woman in an unsafe situation or significant conflict at home. The draft bill would make abortions impossible without parental consent for 16-plus minors, an especially egregious move as the Spanish Healthcare Law affords them other rights, including the right to refuse therapy, or opt for surgery; in the social realm, they are able to get married without parental approval. “It’s a big contradiction that these minors that have all the rights in decisions concerning health matters, couldn’t decide about the termination of pregnancy, which is a very important issue for their lives,” says Alberto Stolzenburg, an ACAI international representative.

Minister of Justice Alberto Ruiz-Gallardón, one of the architects of the proposed legislation, announced it just before Christmas of last year. The public argued that this was a strategic move, since most Spanish citizens would be out on holidays and wouldn’t be paying much attention to the news. Yet, the reaction was far from quiet. And the outcry didn’t just come from women—like those in the ACAI study—who have already had abortions.

Instead, opposition to the bill has come from all sectors of Spanish society.

Most opposition parties publicly came out against the bill. The PSOE appealed women in the PP to withdraw their support for the bill. “It’s not a law against abortion, it’s a law against women. We are treated as incapable [people],” said Elena Valenciano, PSOE deputy leader after the announcement. “I wonder if women in the PP are not ashamed of being treated this way.”

And on the night that the bill was announced, 500 people gathered in front of the Ministry of Justice in Madrid demanding the proposal be withdrawn. The protest was called by Nosotras Decidimos (“we decide,” in English), a platform that protects sexual and reproductive rights in Spain. Similar demonstrations were called by the State Federation of Feminist Organizations across the country.

Amid national protests and criticism from the international community came the opposition of some of the members of the PP. One of whom was José Antonio Monago, member of the PP and president of the Extremadura region, who pressed for changes to the bill. “No one can deny anyone the right to be a mother and no one can force anyone to be one,” said Monago in a public statement. “Ideology should not be introduced in the state’s affairs.”

The clear division within the PP encouraged the PSOE to call for a secret ballot in an effort to stop the bill before it was put to a general vote. “We’re trying to take away the excuse that [members of the PP] would be penalized by the barons of the party [for opposing the bill],” said the PSOE’s Carmen Montón before the vote. “The majority of Spaniards don’t want this reform.”

But in February, the Spanish parliament voted 183 to 151 in favour of moving forward with the bill. The result doesn’t discourage Stolzenburg. “[The secret ballot] wasn’t a vote for the bill, it was just a vote on the Socialist Party’s proposal to eliminate it,” he says. “It’s quite clear that the PP would never accept eliminating the bill.”

The PP’s Gallardón has made it clear that he’s not willing to change the main points of the bill and a date hasn’t been set for a final vote. “I don’t know what they’re waiting for,” says Stolzenburg, who argues there are two possibilities that would explain the lack of action on the bill. The first is a change in power. The clear opposition to the abortion bill opens the possibility to find another candidate for the position of Minister of Justice. If that’s the case, Stolzenburg argues, “Gallardón could take his bill with him. … I think even in his own party, a lot of people could use this bill to eliminate him. And perhaps they think, if we eliminate Gallardón, we eliminate a very controversial point.”

The second possibility is that the government had been waiting for the May European elections to measure the current administration’s popularity. If the PP had maintained its popularity in the elections, the party may have translated that support into the public support for the bill. But as the PP only gained about a quarter of the votes—this possibility doesn’t appear to be viable, leaving the future of the bill uncertain.

And the PP ’s hopes to pass such a conservative abortion bill in opposition to public opinion are unclear. Despite the party’s loss of support in the EU elections, one thing does remain certain: If the bill is put to a vote in the Spanish parliament—where the PP has a comfortable majority—the draft law will be approved. And if the opposition doesn’t manage to kill the draft bill with a combination of popular dissent and medical expert support now, it will soon be too late.