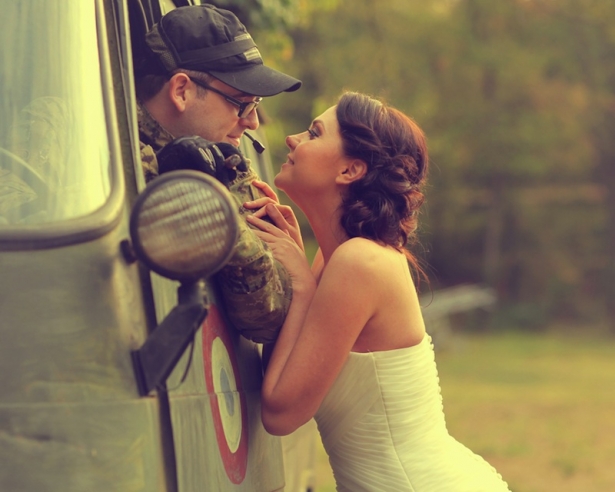 It was only 7:45 a.m., but I was already feeling surly. Thanks to an insurance snafu, I was now waiting to have my blood drawn. I looked up at the TV. The Today Show was doing an exposé, one with an undercover report and everything. You might be thinking that they were going to shine a light on some unconscionable abuse being perpetrated by a powerful entity against a vulnerable victim. Not so much.

What was the abuse? U.S. military personnel, it seems, are going out and finding spouses to participate in sham marriages. The "married" soldier then collects a decent amount of extra money (apparently more than $1,000 per month), and usually gives the spouse—who now has a cost-free place to live and health insurance—a bit of the cash. Let's be clear about one thing. This is flat-out wrong. I don't condone it, and there's no way around the fact that it is immoral and illegal. Fraud is fraud, no matter the amount in question.

So what did the intrepid journalists at The Today Show do? They sent "hidden cameras" to catch these nefarious criminal masterminds. First, the segment begins with grainy, black-and-white footage. Then we hear condemnations from NBC News analyst Col. Jack Jacobs—who undoubtedly earns a great deal more than the average grunt desperate enough to go through with this kind of fraud.

Finally, we get the money shot. Today had an undercover producer answer an ad that blatantly proposed a sham marriage. They put a wire on her, just like she was going in to get a confession from a murderous mob boss. She goes to the mobster's secret, private lair, er, I mean, she meets a barely out-of-his-teens soldier at a fast food place. He lays out the deal, closing with an irresistible rhetorical flourish, "You're just getting free stuff"—only he didn't say "stuff."

Next, the voice of righteous, journalistic authority intones: "After making his pitch, he gets up to leave. And I'm waiting outside." On camera, the reporter tells the soldier that he has been videotaped committing fraud, and asks why he did it. "So I can help support my son." Is this a lie? Maybe, but it looked to me much more like the truth, given how quickly and easily the answer came out of the soldier's mouth. The reporter's instantaneous reply: "Now look, a lot of people have children they want to support." The tone of superiority was unmistakable. At least he added, "and that is noble." Gee, thanks.

Here's what I'm thinking: Aren't there U.S. military personnel on food stamps? More broadly, it's not like the average soldier is pulling down a six-figure salary. And this guy—who says he's got a child to support—do you think he'll be living high on the hog with his extra $15K a year? Again, none of this excuses the crime, which The Today Show claimed is widespread in the armed forces. It's not okay to steal just because one earns below the median income level. But as I watched "National Investigative Reporter" Jeff Rossen bear down on a soldier lucky to be earning one-fifth what he is, I wanted to know why this was the crime on which The Today Show chose to focus. What about educating its millions of viewers about, oh, I don't know, the billions of dollars that corporations are scamming via barely legal tax maneuvers? By the way, House Republicans have refused to go along with Democratic efforts to ban such maneuvers.

Regarding those billions, corporations have increasingly been deploying a scheme called "tax inversions." This term refers to "the practice of corporations buying subsidiaries in foreign countries, then renouncing U.S. citizenship to get out of paying U.S. taxes." These and other sorts of schemes have become, according to Eduardo Porter at the New York Times (his columns are in the Business section, but there is no op-ed columnist writing more powerfully about economic justice issues) a real threat to the ability of governments to raise revenue in a progressive fashion:

If corporations can continue to evade taxation — using strategies like sham transactions between phantom subsidiaries to shift profits to the lowest tax jurisdictions and costs to where taxes are highest — the burden of public finance will land almost entirely on the shoulders of ordinary workers, the only link in the economic chain that can’t move.

An accompanying chart shows that corporations are paying an ever-shrinking percentage of their profits in federal taxes. The rate is as low as it has been since the end of the Great Depression. Has The Today Show reported on any of these issues? Has it asked whether it makes sense that corporate America contributes less and less yet—thanks to, among other things, Citizens United—has more influence over the political process than ever?

I think you already know the answer to that question. A search of The Today Show's website reveals that they have not. How about NBC News in general? There was a report on CNBC (which, apparently, no one is watching as ratings are at a 21-year low) after the White House moved to limit tax inversions through tightening regulations, and a bit of talking-head chatter related to it. If The Today Show wanted to do a report on U.S. soldiers and ripoffs, they could have looked at predatory payday lenders flim-flamming military personnel with crazy-high interest rates. They haven't.

Let's review. A highly profitable TV show that brings in hundreds of millions of dollars annually—"effectively subsidizing other news shows" broadcast by its network, according to the Times—targets individual criminals, each of whom is committing fraud that costs the government about a thousand dollars a month. That show—as well as the flagship nightly news show that it subsidizes—do not report on billions of dollars being lost by that same government because corporations are clever enough to exploit the tax code.

After watching the report, I was just stunned by how much trouble The Today Show went through to catch what really amounts to petty thievery—wrong though it undoubtedly is—while big corporations essentially steal money from our government by the truckload. TV news shows produce sexy, easy to understand stories like this one while ignoring the more complex, but more important stories about the real injustices in our economic system. And that's what's wrong with the mainstream, corporate-run media in a nutshell.