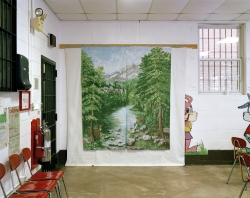 Pete Brook is a British, Portland, Ore.-based writer and curator of the excellent blog Prison Photography. In his words, that blog is built, first, on the premise that "the United States needs to pursue large-scale prison and sentencing reform," and second, on the idea that cameras in prisons provide an excellent viewpoint from which to consider how such sentencing reform might happen. Again, his words:

"Cameras and their operators function in recording, and to some degree, interpreting the stories of (and within) prison systems. How varied is the imagery? If a camera is within prison walls we should always be asking: How did it get there? What are/were the motives? What are the responses? What social and political powers are at play in a photograph’s manufacture? And, how is knowledge, related to those powers, constructed? Prison Photography also concerns itself with civil liberties, ethics and social justice as they relate to photography and photojournalism."

In the spirit of answering those questions, acknowleging those concerns, and putting prison photography on display in a gallery for all to see, Brook has curated Prison Obscura, an exhibit running at Haverford College’s Cantor Fitzgerald Gallery through March 7.

Even if you can't get to Haverford College (it's about a half-hour drive west of Center City Philadelphia), the gallery itself and the essay accompanying it are required viewing for anyone who cares about how prisons operate and how the system that surrounds them might reform.

Matt Stroud is a former Innocence Network investigator who now covers the U.S. legal system, in all its glory and ugliness, as a freelance journalist. Follow him on Twitter @ssttrroouudd. Email him at stroudjournalism