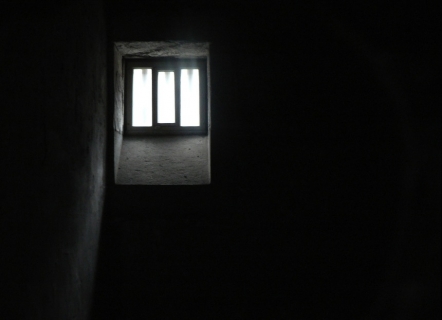 Every day, as many as 300 immigrant detainees in the United States spend 22 to 24 hours a day in complete social and physical isolation.

A new report released this month by the International Human Rights Clinic (IHRC) at the John Marshall Law School examines this use of segregation—the official term for solitary confinement—with immigrant detainees in light of a directive issued by U.S. Immigration and Custom Enforcement (ICE) last fall.

Immigrant detainees often spend weeks or months in conditions that cause severe and irreversible psychological effects. And according to trauma experts, these psychological effects can be more profound for immigrants, many of whom are survivors of  human trafficking, sexual assault, persecution, or torture.

Similar to other prisoners, immigrant detainees can be placed in solitary confinement for a small infraction like playing cards during a church service or having prescribed medication in a cell. Detainees can also be sent to solitary simply for being themselves. Detention facilities routinely place LGBT detainees and individuals with mental disabilities in solitary confinement rather than creating a safe alternative to detention.

And according to the new ICE directive, detainees can only be placed in “administrative segregation” for their own safety; alternatively, they can be placed in “disciplinary segregation” as punishment after a hearing. The directive outlined additional measures for accountability, such as reviewing the cases of detainees who have been in segregation for extended periods of time.

Although these standards look good on paper, abuse and disorganization are so endemic to the immigration detention system that even policies that aim to protect detainees fall short. Because despite recent signs of success in the fight against solitary confinement in U.S. prisons more broadly, the fate of those immigrants who are languishing in similarly deplorable conditions while waiting for a hearing is largely invisible.

After reviewing ICE’s history, IHRC concludes: “it is unlikely that the new directive will be implemented swiftly and uniformly.” Documents that IHRC acquired through a Freedom of Information Act Request reveal that ICE routinely disregarded an extensive set of standards created in 2011.  For example, the 2011 standards explicitly state: “food shall never be used for reward or punishment.” Yet, IHRC describes a detainee in Nevada who was only fed nutraloaf—a hodgepodge of “nutritional” foods baked into a tasteless brick often used as punishment in prisons—for seven days while in disciplinary segregation.

Moreover, the report implies that ICE may not be capable of enacting these changes.  Immigrants are detained in a vast network of immigration detention facilities, county jails, and private prisons, which use their own standards for solitary confinement. As previous ICE director John Morton told Congress in a 2012 testimony, “There are a few facilities [ICE] completely control[s] and in those implementation can be immediate.” Presumably, detainees in the remaining facilities will just have to wait. Pedro Guzman, an immigrant detained at the privately owned Stewart Detention Center in Georgia, underscores the urgency of the situation.

IHRC recommends that ICE only use solitary confinement as a last resort and calls on the agency to establish an independent monitoring committee. Those changes would be important steps towards eliminating the excessive and discriminatory application of solitary confinement for immigrant detainees. Yet the stories documented in IHRC’s report suggest that change will not come easily at this intersection of the prison system’s inhumanity and the immigration system’s bureaucratic disorganization.