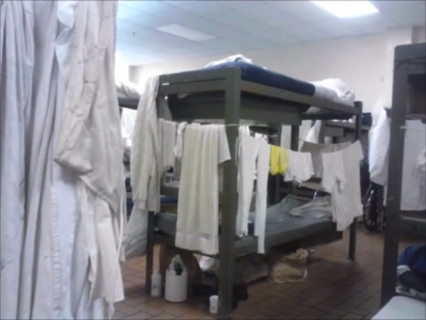 “We have to stop this slave system,” says Melvin Ray “we already went through that institution one time before.” From inside a segregation cell in St Clair Correctional Facility in Melville, Alabama, Ray is trying to organize a strike against unpaid prison labor and for better conditions. Ray and other prisoners involved in the “Free Alabama Movement” announced earlier this month that they would refuse to work prison jobs this week. It would have been the second time this year that Alabama prisoners organized a work stoppage; a similar strike in January began at St Clair and spread to at least two other prisons in the state. Ray says he has been held in a “filthy” segregation unit since January 3rd, the eve of the first strike—retaliation, he believes, for his part in the protest.

Speaking to The Prison Complex on Monday, shortly after the strike was scheduled to start, Ray said the Free Alabama Movement “wants to change the overall approach to what corrections is like in the United States. And we want to start with Alabama because Alabama has the worst prison system in the United States.”

But so far this week there have been no signs of the threatened strike. Supporters of the prisoners say that authorities have managed to “stall” the protest. In a statement to The Prison Complex, Kristi Gates, a spokesperson for the Alabama Department of Corrections, said, “We have talked to the warden at the facility, and they have gathered no intelligence about a possible work stoppage. We continue to closely monitor the situation.” Faulkner says other prisoners have told him that prisoners were being threatened with solitary confinement if they refused to work. “They also had rumors spread that the strike was only being called by Muslims, which made many of the Christians not want to participate.” Reports from prisoners that Ray had been moved to a “dry” cell, “without lights or bedding" could not be confirmed. Reached by phone on Monday, St Clair's warden, Carter Davenport, declined to comment and instead directed all questions to the main Corrections Department, saying “I'm able to tell you a lot of things, sir, I'm just not going to tell you anything.”

Using prisoners to work for public and private industries is commonplace in Alabama and throughout the United States. The most common jobs are institutional assignments in the prison itself, including working in kitchens, laundry rooms, doing ground maintenance, or janitorial work. These operational jobs keep the prisons running, and are either low paid, or, in some states, including Texas, Georgia, and Alabama, not paid at all. A smaller number of prisoners work for Alabama Correctional Industries, providing goods and services for the state. St Clair has a vehicle restoration and chemical plant.

Private businesses also use prison labor. In 2012, Alabama passed a bill allowing private businesses to contract prison labor. The law required prisoners to be paid “not less than the prevailing wage for work of a similar nature in the private sector” but allows the department to withhold up to 40 percent of that wage for “costs incident to the inmate's confinement, as the department shall deem appropriate and reasonable.” The bill was opposed at the time by the AFL-CIO. The union's national policy director Damon Silvers called it a form of “quasi-slavery.”

Melvin Ray agrees. “You have this tremendous pool of free labor that is probably somewhere around 10,000 people, and this is how the infrastructure of these prison systems survive.” That’s why Ray says the Free Alabama Movement chose a work stoppage instead of a hunger strike. “We feel like the hunger strikes hurt the individual more than they hurt the state,” Ray explains. “They bring in the media they bring in the attention, but it brings a tremendous amount of suffering on the individual, and so what we did we had to figure out how can we attack this system at the core.” Ray says he was inspired by the mass work strike by Georgia prisoners in 2010. Work strikes, according to Ray, were a way for prisoners to use their “economic muscle” in a non-violent protest, a view shared by the IWW.

It is not the first time that the IWW, or the “Wobblies,” have become involved in prison issues. In 1987, hundreds of prisoners at the Southwest Ohio Correctional Facility signed a petition authorizing the union to negotiate on their behalf, but the state's Department of Corrections refused to recognize the prisoners as employees. It's the same issue in Alabama, says Faulkner. “They're as much part of the economy as anyone that's on the other side of that fence.” He says prisoners have “traditionally been looked down on by the middle class labor unions, you know the unions that focus on middle class issues rather than working class issues. The prison industrial complex is a working class issue, and as such, the unions should be involved in it.”

Since last year, the Free Alabama Movement has been using cellphones to upload pictures and more than 60 videos from inside prison. Ray says the group is “teaching young guys to be journalists with their phones.” Videos show, what Ray says, are the “deplorable” living conditions in the prison. “There's filth. You have raw food. ... We went into the dorms and showed rats running around in the living area, spiderwebs, bugs” he says.

Those videos came as no surprise to Randall Marshall, legal director of the Alabama ACLU. “Alabama prisons are at double their inmate capacity,” says Marshall, “making it more difficult to do anything other than simply warehouse.” According to the Alabama Department of Corrections, the state's prison facilities are designed to house just 13,318 people. In January, the “in house population” was 25,102. Marshall says while there are some constitutional rights for prisoners, it's “extraordinarily difficult for prisoners to organize protests.”

Apart from demanding an end to overcrowding and unpaid labor, the Free Alabama Movement is also pushing a draft piece of legislation, “Alabama's Education, Rehabilitation, and Re-entry Preparedness Bill,” as a model for state legislators. The bill calls for media access to prisons, limits on the sentencing of people younger than 22, and increased opportunities for parole. This Saturday, the Free Alabama Movement and IWW will hold a rally and candlelit vigil in Birmingham in support of the prisoners. “The state of Alabama will be ground central for a civil rights, human rights movement again,” says Ray, “but this time we're addressing prisons.”