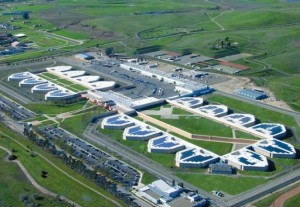 One of the largest correctional facilities in the US, California's Santa Rita jail requires female prisoners to undergo a pregnancy test.

In June, the American Civil Liberties Union of Northern California filed a lawsuit against the county sheriff's department challenging the practice.

“If the Alameda County Sheriff’s Department is genuinely concerned about the health of women in their custody, voluntary pregnancy testing should be administered as part of a comprehensive health exam,” said Elizabeth Gill, Senior Staff Attorney at the ACLU of Northern California. “Forcing a woman to take a pregnancy test is a clear violation of a person’s constitutional rights, as well as a violation of other state law.” Continue reading..

One after another, women held at Alameda County jails told me similar tales of coercion and confusion, regardless of their alleged crime or their personal medical history. (The women all asked to remain anonymous.)

“They made me take one even though I’m infertile, told them so, and even though that could have easily been verified with one phone call. They had a woman cop watch me pee, I think because I had indicated I didn’t want to take a pregnancy test,” one woman told me in a written message.

“They told me it was because ‘Glen Dyer can’t hold women, so all women being held at Glen Dyer need to take a pregnancy test,’ which didn’t make any sense,” wrote another.

“It struck me for the first time when I was forced to pee in the cup, that I really could be coerced to do things that I didn’t want to do, and that it didn’t take much either. I was pretty furious that even my own bodily fluids were not my own,” a third woman wrote in her prison diary, which she shared with me. Continue reading...

The ACLU court case is expected to be heard this fall. The reason for testing in the first place remains unclear. It's also not apparent whether the testing was done at the behest of the sheriff or the private company managing healthcare in the jails.

While Alameda County sheriffs claim these tests are meant to protect women’s health, during this limbo period in holding—which can last for more than two days—it is jail policy that detainees are not given access to doctors, nurses, or any other medical care, including their prescribed medications for conditions as serious as diabetes, multiple sclerosis, and HIV.

Alameda County and Corizon both declined to answer questions about their specific reproductive health-care policies and pregnancy test practices due to the ACLU’s pending lawsuit.

“Women are provided with a wide range of services, including contraception, as well as obstetrical care if they are pregnant while incarcerated,” Corizon spokesperson Susan Morganstern wrote in an email.

“Corizon’s policies are consistent with the American Congress of Obstetricians and Gynecologists, and the entire program is closely monitored by a board-certified obstetrician/gynecologist.”

Though sheriffs previously said that mandatory pregnancy testing was Corizon’s policy, they have changed their story following the ACLU’s suit.

“They are saying different things in different contexts,” said the ACLU’s Gill. “They’ve variously said they’re required to do it or that their health-care contract requires it, which may be the case but is irrelevant.”

Since the suit was filed, sheriffs have repeatedly stated that the policy was a result of a consent decree, though they’ve declined to provide details. Continue reading..

San Francisco County, just the other side of the San Francisco Bay from Alameda, also provides pregnancy testing to prisoners in its jails but as an optional test which a prisoner can decline to take.