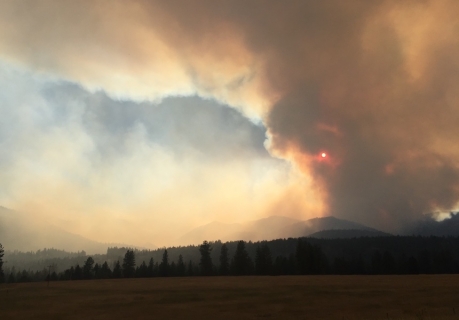 Too busy to follow the news this week? Taking a break from Twitter? RAITT has you covered.

On the international front, President Trump and state media spokespeople for the Democratic People’s Republic of North Korea (DPRK) spent much of last week trying to find the right words to convey their ability and readiness to annihilate a lot of innocent people. At a press conference on Friday, the "America first" president also surprised many when he stated that he wasn't ruling out a "military option" in Venezuela. That said, U.S. corporate earnings, fearlessly re-reported by Breitbart as a big win for the new administration, are the best they’ve been in 13 years. Wages for most Americans, unfortunately, remain stagnant. Also, yesterday, in Charlottesville, Va., one person died and 19 others were injured at a white nationalist rally when a man attacked counter-protestors with his car.

The following stories you may have missed, however, are about massive wildfires in Montana, another Monsanto cover up, poor excuses from an Illinois utility and a new rural reporting project in Texas.

On July 25, the federal government rejected a request for emergency funding from Montana, which is currently battling numerous wildfires in the state. The funding would have allowed the state to recoup 75 percent of what it’s spent on fire control. Ronja Abel, spokeswoman for Gov. Steve Bullock (D), says that the state is appealing the rejection. At least two firefighters have died on the job this wildfire season, both in Montana.

Montana, however, is not the only area battling record wildfires this summer. As of Aug. 9, there were 128 fires burning In British Columbia. Smoke from the fires is so thick that as it drifts down into the Northwest United States, it’s causing a slight cooling effect. Not that you’d notice—the temperatures in the Pacific Northwest have been sky-high, with Oregon surpassing several daily records last week. As Grist reporter Eric Holthaus put it, “It’s feeling a little apocalypse-y in the Pacific Northwest this week.” Firefighters are travelling from as far as Austrailia to assist in putting out the flames.

Monsanto has found itself stuck in the revolving headline door as of late. Last week, lawyers leaked emails between the biotech company and “independent” glyphosate researchers to the New York Times, which reported that Monsanto is playing a much more active role behind the scenes than it lets on when it comes to influencing the media and academic research.

Earlier this week, in much the same vein: Reuter’s found that Monsanto sent out samples of XtendiMax, its new dicamba-based herbicide, to researchers under the condition that they not test its volatility (the extent to which a formula will vaporize and travel across fields after application). Why not? "This product needed to get into the hands of growers,” Monsanto’s Vice President for Global Strategy, Scott Partridge, told Reuters. Even without the volatility testing, the EPA approved XtendiMax in September of last year. However, as of July 19, 2.5 million acres of crops have been reported damaged by dicamba drift and the EPA is now (finally) reviewing restrictions on dicamba labels.

To top it all off, the Guardian reported on Thursday that Monsanto “continued to produce and sell toxic industrial chemicals known as PCBs [polychlorinated biphenyls] for eight years after learning that they posed hazards to public health and the environment.” Recently released archival documents showed that as many as ten years before PCBs, which were originally manufactured as lubricants and coolants, were widely banned, Monsanto seems to have recognized their potential for serious human and environmental harm—while continuing to market the chemicals as safe to the public.

As reported by Midwest Energy News, a utility company is playing on the age-old trope of the urban-rural divide in downstate Illinois—an area that includes "almost everywhere outside the Chicago metropolitan area." The utility, Ameren Illinois, is arguing that it can’t meet new energy efficiency targets passed in a 2016 energy law because its downstate customer base is lower-income, more geographically spread out and less educated. Therefore, the utility says, it needs to spend more on outreach programs before it can work on efficiency measures.

Critics, which include the National Resources Defense Council, the Environmental Defense Fund, Citizen’s Utility Board, and individual energy consultants, aren’t buying it. They point out that Ameren’s request would lead to 27 percent less in energy savings over the next four years, as well as $36 million saved in penalties, and $36 in bonuses for exceeding their lowered energy targets.

And the argument the utility company employed in the hopes of earning these savings? It's a red herring, say critics. According to David Kolata, executive director of the Citizens Utility Board:

“They’re trying to split our community and it’s not working. It’s not an either-or. There should be an appropriate investment in low-income programs, but they can do that and still meet their targets.”

“We need full portraits, not caricatures.”

The Austin-based nonprofit news organization and bimonthly magazine, Texas Observer, has just introduced a new rural reporting project, promising to deliver nuanced reporting on rural issues and to keep journalism from becoming a white-collar, city-based profession in the Lone Star state. The long-term project aims to bridge the gap between Texas’ urban and rural populations. While 80 percent of Texans live in urban areas, Texas has the largest rural population of any state: 3.8 million.

Explaining their reasons for launching the project Forrest Wilder, the Observer’s editor, writes:

Trump’s election taught the nation many painful lessons. Among them: the traditional divide between town and country has become a chasm. People in blue, urban enclaves discovered, or rediscovered, the depth of anger and resentment felt in forgotten, mostly rural, corners of America. The national media went through a period of self-examination. How did we get it so wrong? Many journalists pledged to get out more, to spend more time in neglected or ignored communities. Progressives are in conflict over whether to retreat to comfortable geography and demography or to re-engage with communities that rallied to Trump’s troubling but effective message.

But a seismic election outcome shouldn’t be required to generate interest in bridging the urban-rural divide. Here in Texas, we’ve long suffered from a peculiar dichotomy: The state’s self-image is one of the frontier, of vast ranches and cowboys. But Texas is an urban state. More than 80 percent of Texans now live in an urban area, and the vast majority of population growth is concentrated in cities. Follow I-45 from Dallas to Houston and then I-10 from Houston to San Antonio and then I-35 north through Austin back to Dallas: That triangle is the future of Texas.

Yet Texas also has the largest rural population of any state: 3.8 million people. We contain multitudes — uneasy multitudes increasingly at odds. No wonder our politics is so riven. Recently, Lieutenant Governor Dan Patrick (late of Baltimore, Maryland) said “all our problems in America” stem from “cities that are mostly controlled by Democrat mayors.”

Dan Patrick was not just disrespectful toward cities; he also belied an ignorance of the real issues faced by small towns and the country. The fact is, rural America, rural Texas, is under tremendous stress. Many problems are the same as in the cities: stagnant wages, income inequality, health-care woes, racial conflicts. But rural Texas faces a set of issues all its own: stagnant or declining populations, economic dislocations from globalization and trade, a severe shortage of primary care physicians, land fragmentation, water scarcity and myriad agricultural challenges that barely register with city dwellers.

More intangibly, many communities are coping with an unraveling of a way of life as young people flee and political leaders are consumed with ideological concerns. I grew up in the country, and sometimes it’s hard to explain, to those who didn’t, the mixture of pride and resentment that comes from living “out here.” (I blame mainstream radio country for the shallow fixation on dirt roads, cheap beer and cartoonish religion.)

One of the reasons we’ve reached an impasse of mutual misunderstanding is that media is concentrated in the cities and journalism has increasingly become a white-collar profession requiring an elite education. Too often, journalists in Austin, Houston, Dallas and other metro areas treat much of the rest of Texas as flyover country. Meanwhile, many small-town newspapers have been absorbed by corporate chains that have little to no interest in robust, enterprise reporting. And, sadly, many family-owned papers have for ages studiously avoided rocking the local establishment.