Hyatt Surveils Its Workers Via IPods 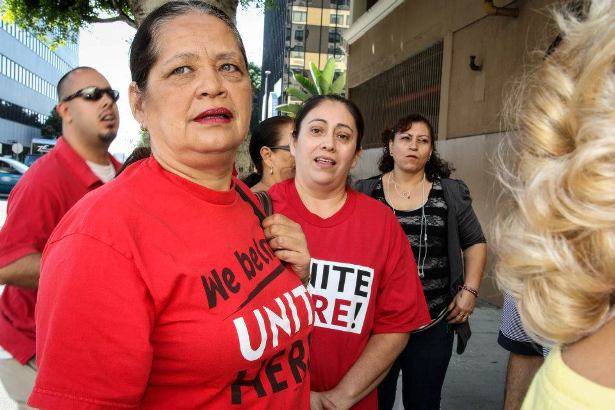 What we almost never hear, however, is a real discussion of the place most Americans have their freedoms curtailed: the workplace.

For example, look at the Hyatt Andaz hotel in West Hollywood, California. The hotel housekeepers, represented by UNITE HERE Local 11, have filed a complaint with the National Labor Relations Board over an electronic tracking system used to monitor their productivity.

The housekeepers are given an iPod Touch to carry with them as they work—but not to listen to morale-boosting music, or to communicate with one another as they clean. The iPods are outfitted with a program that tells the housekeepers which room to push their carts full of cleaning equipment to. There's a button to push when they start cleaning the room and another to push when they finish.

The program is known as “Rex” because it features a running, tail-wagging dog animation. “Whoever thought of this system thought it was cute,” Cathy Youngblood, a housekeeper at the Hyatt Andaz, tells Working In These Times. “If you're a housekeeper you're not thought of as highly intelligent. This is American society. You're in a low position anyway. Now the dog has become our symbol at my Hyatt Andaz. We do run around like dogs, but still, we're not dogs.”

The complaint was filed, not because this type of surveillance at work is illegal, but because it was imposed on the workers from above without a chance for them to bargain through their union. Under the terms of their most recent collective bargaining agreement, which both parties have agreed to abide by, the housekeepers should get some input before their work processes are drastically changed.The NLRB has agreed to hold hearings on the issue on November 26.

“They never ask for the housekeeper's input before they change the working rules. What does that tell me? That tells me we don't count for anything,” Youngblood says. The Hyatt's stated reason for the new system was “efficiency,” but, she pointed out, the best way to do things efficiently would have been to sit down and discuss with the people who know the job best: the workers who do it every day.

Under their old system, Youngblood explained, the housekeepers were given a paper at the beginning of the day listing the rooms they needed to clean, and they could do them in the most efficient manner. Now, with the Rex system, the iPod tells them which room to do next, even if that room is on another floor. They may make the trip from floor to floor, pushing their 100-pound carts on carpet, many times rather than just one. “It creates unnecessary travel time, and a housekeeper doesn't even have an extra minute,” she said.

In addition to feeling belittled by the choice of a dog as a symbol, Youngblood and the other housekeepers are upset about the way the system monitors their work process. “I don't know if it was their intent to also do surveillance on us,” she explained, “but it has become a surveillance system.”

The computer system allows supervisors to see exactly where housekeepers are at any time, how long it takes them to complete a room, and when they clock out for a break. Youngblood said that while she's working, she has gotten surprise phone calls from a supervisor tracking her with the system.

Corey Robin, Brooklyn College professor and author of the book Fear: The History of a Political Idea, commented to Working In These Times:

When government engages in this kind of surveillance, we are appropriately appalled. But for some reason when the private sector does it, we -- and I don't just mean people on the right -- are indifferent. Every day I read tens, if not hundreds, of outraged tweets, posts, and emails about the government watching what we do. But a story like this, which is so common to workers' everyday lives, gets passed over as somehow the price of doing business.

Youngblood noted too that the new system allows the supervisors free time to attend meetings, rather than requiring them to be a presence in the halls to attend to housekeepers' questions immediately. Now, she said, everything goes through the computer—if they are missing something they need, they have to stop and use the iPod to report a problem.

Apple could not be reached for comment, but Robin noted the gulf between what the iPod Touch was designed for and its use as a tool of control:

One of the items in this story that most reveals the gulf between the lives of workers and the lives of professionals and media types is the iPod. For many people, the iPod is their freedom: they get to choose their own music, fashion their own media, suit everything to their own particular tastes. But for housekeepers in a hotel, it's an instrument of submission and domination. We know the terrible stories about how iPods get produced (in faraway lands). But what about the terrible stories of how they get used, not merely elsewhere but also here, in the US?

The housekeepers are already subject to inspection of the rooms they clean, as well as the possibility of guests' complaints if a room is not up to their standards. All of this can subject them to the hotel's “progressive discipline," a series of escalating punishments for each infraction—a verbal warning, one day of lost work, then two, and so on. A severe guest complaint, Youngblood said, can lead to termination right away—and, she noted, the people they're serving expect a lot from them. “You are serving pretty much the 1%,” she said. “I call it a high roller hotel.”

This is not the first complaint the union has made against Hyatt, by a long shot. Earlier this year, UNITE HERE and community and labor allies including the AFL-CIO, NOW and the NFL Players Association launched a boycott of the Hyatt chain over its treatment of employees. The hotel chain has denied that it mistreats workers.

For Youngblood, this episode is symptomatic of how the hotel chain treats her and her colleagues. “If you had a respectful employer-employee relationship, if we are counted as family, if their door is always open, we should not have had to go to the NLRB,” she said. “We women, we know when we're being treated wrong.”