Hundreds of Fruit Packing Workers Are On Strike 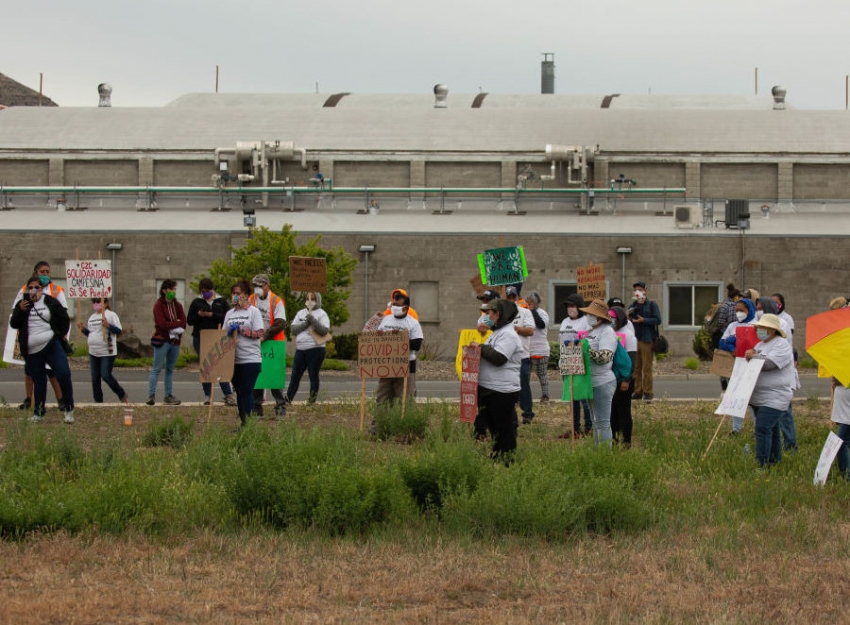 Workers on strike in Naches, Washington, outside of Allan Brothers Fruit on May 16, 2020. Hundreds of workers at more than six fruit and apple packing plants have gone on strike in recent days, protesting working conditions made more dangerous by the Covid-19 pandemic. (Photo by David Ryder/Getty Images)

This article was originally published at Labor Notes.

Since this article was written, apple packinghouse workers at two more companies have joined the strike: at Hansen Fruit and Columbia Reach. Six worksites in Yakima County have now seen production shut down. The county has the highest rate of COVID-19 cases on the West Coast. The strikes are women-led, multigenerational, and multiracial, according to Edgar Franks of Familias Unidas por la Justicia, a local farmworkers' union. —Editors

Last week the COVID-related strike in Washington state’s Yakima Valley quadrupled in size, as workers walked out at three more apple packinghouses. More than a hundred stopped work on May 7 at Allan Brothers Fruit, a large apple growing, packing and shipping company in Naches, in Central Washington. On May 12 they were joined by 200 more workers, who walked off the job at the Jack Frost Fruit Co. in Yakima, and at the Matson Fruit Co. in Selah. The next day another 100 workers walked out at the Monson Fruit packing shed, also in Selah.

At the center of the stoppages are two main demands for those who decide to continue working during the pandemic: safer working conditions and an extra $2 an hour in hazard pay.

Apple sheds line the industrial streets of Yakima Valley’s small towns. Inside these huge concrete buildings, hundreds of people labor shoulder-to-shoulder, sorting and packing fruit. If someone gets sick, it can potentially spread through the workers on the lines, and from them into the surrounding towns. Although packinghouse laborers are almost entirely immigrants from Mexico, their families comprise the stable heart of these areas. Most have lived here for years. Jobs in the sheds are a step up from the fields, with year-round work at 40 hours per week.

A Quiet Frenzy of Union Organizing Has Gripped the Nonprofit World 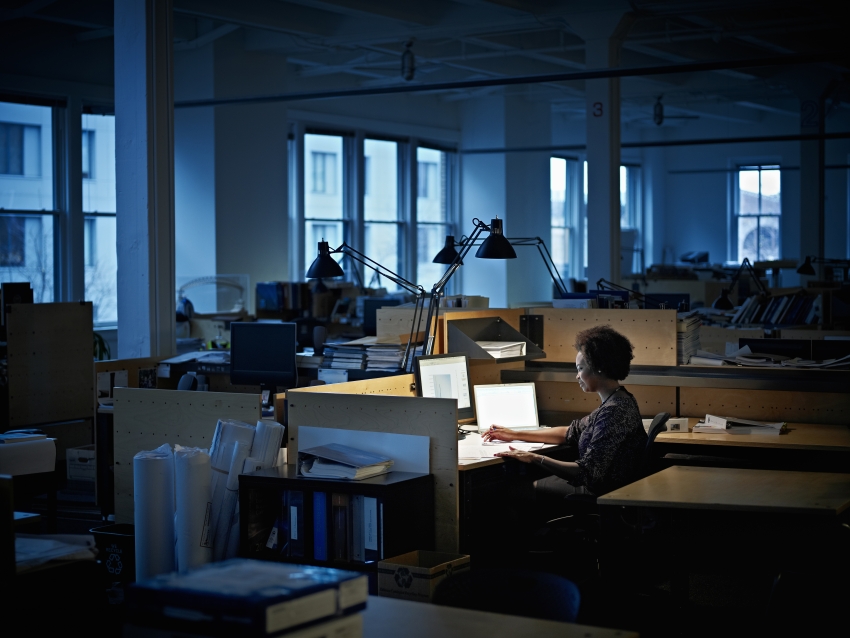 “The reason we all work at nonprofits is because we support the mission of the nonprofits,” says Kayla Blado, who works at the Economic Policy Institute. It makes sense. Like many fields that involve doing something good for the world, nonprofit work tends to come with low pay and long hours. But now, more than ever before, it comes with something else: a union drive. The nonprofit union wave is rising right along with the intensity of the crises that nonprofits are dealing with in our bad, bad world.

Thousands of Essential Workers Are at Risk of Deportation 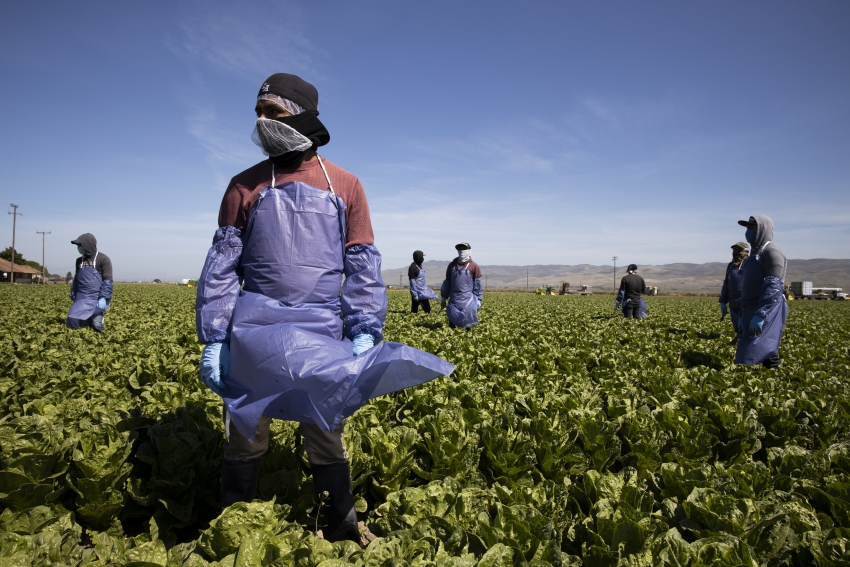 Farm laborers from Fresh Harvest working with an H-2A visa maintain a safe distance as a machine is moved on April 27, 2020 in Greenfield, California. (Photo by Brent Stirton/Getty Images)

Legions of undocumented immigrants in the United States carry letters signed by their employers stating that President Donald Trump's administration considers them essential workers amid the pandemic. While these letters exempt them from being arrested by local agents for violating stay-at-home orders, these workers could still be detained and deported by federal authorities. 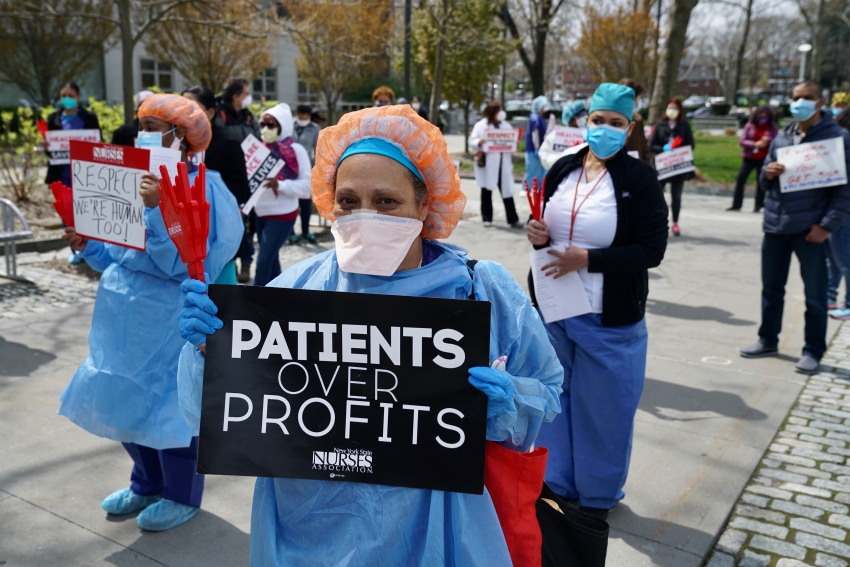 A Medicare for All system would finally take healthcare out of bargaining and allow workers to win so much more. (Photo by Giles Clarke/Getty Images)

Is the ability to negotiate healthcare benefits with employers a source of strength for unions, or an insidious trap? The Covid-19 health crisis and ensuing economic meltdown probably answers that question, but it’s still worth dissecting for those naive optimists who think there is some semblance of the old normal that we can return to when the pandemic is finally behind us. 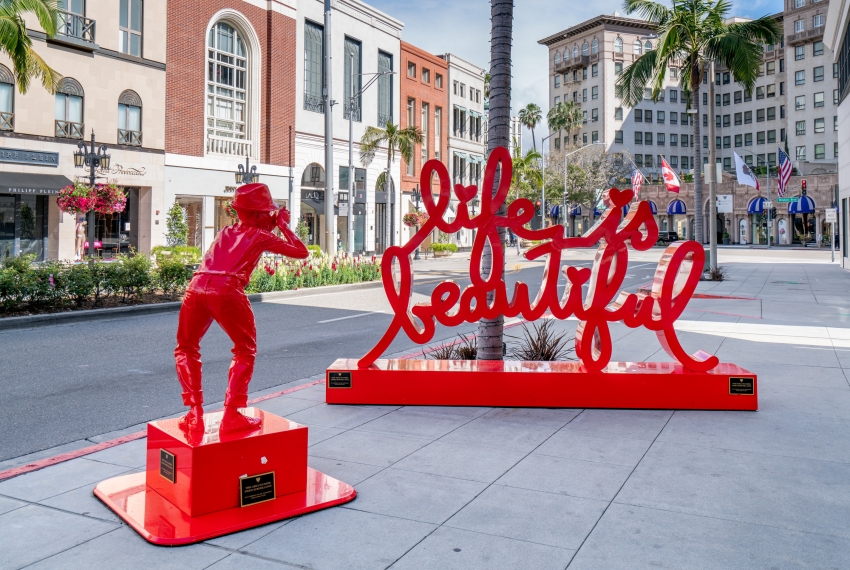 The instinct to save capital and forget everyone else was predictable. (Photo by AaronP/Bauer-Griffin/GC Images)

There is a strong element of unreality to our time. Incredulousness seems the only suitable attitude towards what is happening to us. Not just the coronavirus crisis itself—a global disaster that we helplessly watch sweeping over us, like beachgoers gaping at an incoming tidal wave that is about to wash them away—but also the way members of the economic power structure imagine they will protect themselves from the devastation. They seem to believe they can build themselves a life raft to escape. It’s a fantasy. We’re going to need a bigger boat. 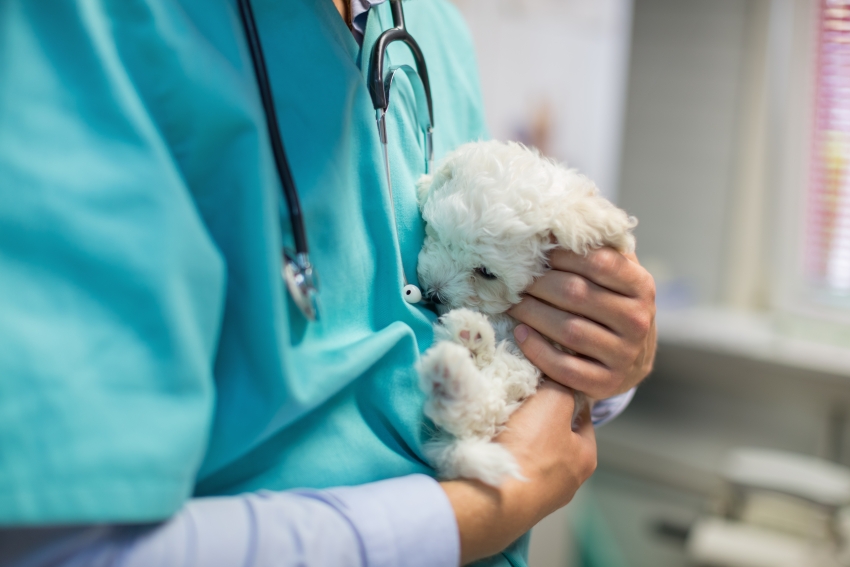 Tana Greatorex, an emergency room technician in Seattle, is not your typical pandemic healthcare worker. The hospital she works for doesn’t see Covid-19 patients. It doesn’t have a cafeteria; there’s no gift shop and no outpatient services, at least not for humans. Like thousands of other veterinary technicians and assistants, Greatorex works demanding hours setting catheters on injured dogs and nursing sick kittens at one of the nation's 3,500 corporate-owned veterinary hospitals and specialty clinics. Designated as essential healthcare workers in states like California and Washington, vet techs are risking their lives for the nation's pets and the profits of a bloated petcare industry worth $225 billion with a slowly increasing portion of that number coming from veterinary services. In a country where 68% of households own at least one pet, vet service CEOs continue to reap record profits while the techs staffing their hospitals are struggling.

The Long-Neglected Online Labor Organizing Space Is Getting More Crowded 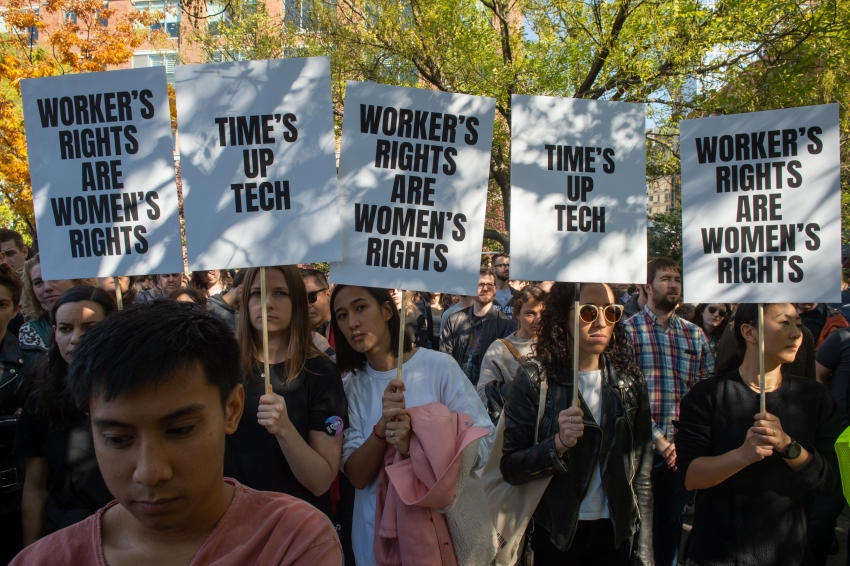 A glance at the website of various unions will tell you that organized labor is not always the most tech-savvy field. It has been clear for years that organizing at scale in the modern world will require a lot of online organizing—it is, as they say, where the workers are. The coming launch of two new online organizing tools could signal a new age of healthy competition in a space that should be a hive of activity, but is not.

Striking Bus Drivers Steer the Way to a Better World 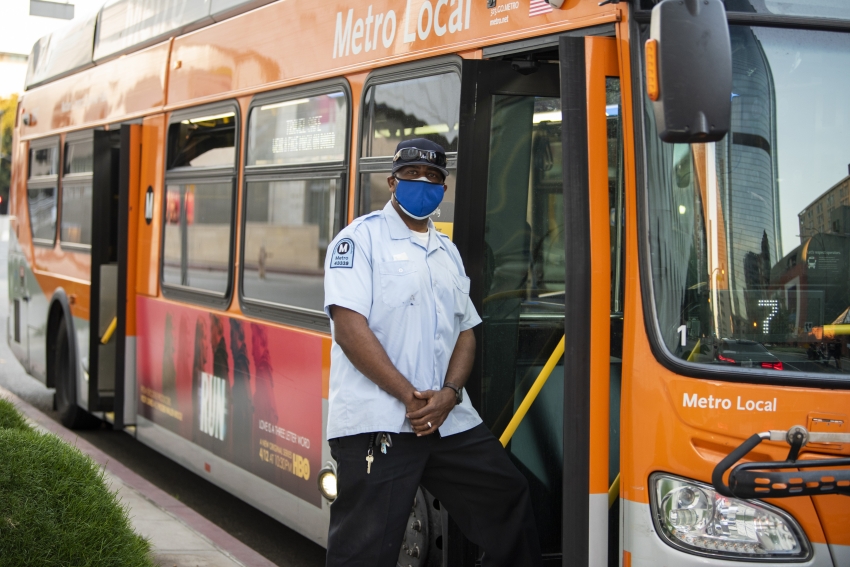 A Metro bus driver wearing a mask takes a break during the coronavirus COVID-19 pandemic on April 25, 2020 in Los Angeles, California. (Photo by Araya Diaz/Getty Images)

All eyes are on essential workers during the coronavirus pandemic, as individuals, companies and even the federal government make a point to thank them for their heroic action: working. Frontline workers have received plenty of symbolic accolades, but many are working without proper personal protective equipment (PPE) and hazard pay, and are scared for their health and safety. Public transit workers, who shuttle other essential workers to and from work, have been sounding the alarm about poor safety standards at their jobs since the beginning of the coronavirus pandemic. The Amalgamated Transit Union (ATU), which represents 200,000 workers in the United States and Canada, told In These Times that nearly 1,000 of its members have been infected with coronavirus, and almost 40 have died. In response, the union has taken action by setting up coronavirus test sites, sharing information about safety gear, and lobbying both the federal and state governments to do more to protect transit workers. It has also partnered with the Transport Workers Union of America (TWU) to increase its strength. 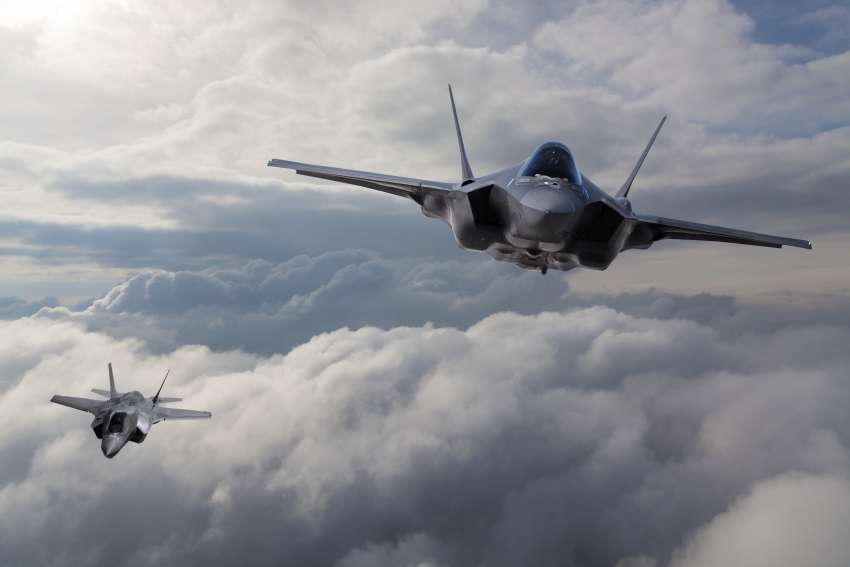 On March 20, the Pentagon issued a guideline stating that U.S manufacturers of missiles, warships and fighter jets should stay open during the Covid-19 crisis. The rationale is that the “defense industrial base” constitutes “essential” critical infrastructure for the United States. Yet we have every reason to believe that U.S. militarism, propped up by the arms industry, is making the world far more vulnerable to the pandemic. 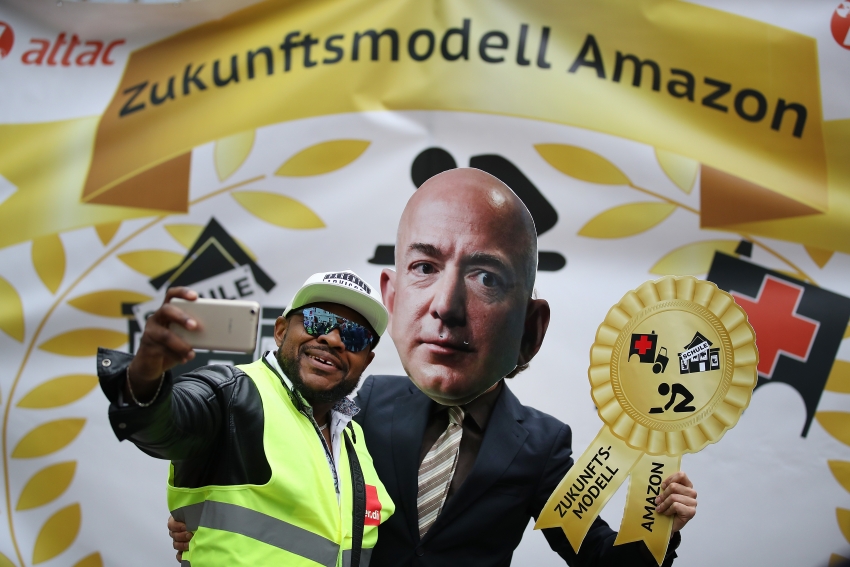 An Amazon warehouse worker shoots a selfie with an activist dressed as Amazon CEO Jeff Bezos during a protest gathering outside the Axel Springer building on April 24, 2018 in Berlin, Germany. (Photo by Sean Gallup/Getty Images)

Amazon worker organizing is going international. A new coalition of Amazon employee activists from Spain, France, German, Poland and America has announced itself with a list of demands for improved pay and safety—and they say that this is just the beginning.